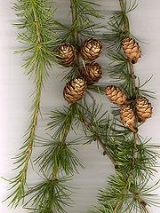 Encyclopedia
Larix decidua, common name European larch, is a species of larch
Larch
Larches are conifers in the genus Larix, in the family Pinaceae. Growing from 15 to 50m tall, they are native to much of the cooler temperate northern hemisphere, on lowlands in the north and high on mountains further south...
native to the mountains of central Europe
Europe
Europe is, by convention, one of the world's seven continents. Comprising the westernmost peninsula of Eurasia, Europe is generally 'divided' from Asia to its east by the watershed divides of the Ural and Caucasus Mountains, the Ural River, the Caspian and Black Seas, and the waterways connecting...
, in the Alps
Alps
The Alps is one of the great mountain range systems of Europe, stretching from Austria and Slovenia in the east through Italy, Switzerland, Liechtenstein and Germany to France in the west....
and Carpathians
Carpathian Mountains
The Carpathian Mountains or Carpathians are a range of mountains forming an arc roughly long across Central and Eastern Europe, making them the second-longest mountain range in Europe...
, with disjunct lowland populations in northern Poland
Poland
Poland , officially the Republic of Poland , is a country in Central Europe bordered by Germany to the west; the Czech Republic and Slovakia to the south; Ukraine, Belarus and Lithuania to the east; and the Baltic Sea and Kaliningrad Oblast, a Russian exclave, to the north...
and southern Lithuania
Lithuania
Lithuania , officially the Republic of Lithuania is a country in Northern Europe, the biggest of the three Baltic states. It is situated along the southeastern shore of the Baltic Sea, whereby to the west lie Sweden and Denmark...
.

Larix decidua is a medium-size to large deciduous
Deciduous
Deciduous means "falling off at maturity" or "tending to fall off", and is typically used in reference to trees or shrubs that lose their leaves seasonally, and to the shedding of other plant structures such as petals after flowering or fruit when ripe...
coniferous
Pinophyta
The conifers, division Pinophyta, also known as division Coniferophyta or Coniferae, are one of 13 or 14 division level taxa within the Kingdom Plantae. Pinophytes are gymnosperms. They are cone-bearing seed plants with vascular tissue; all extant conifers are woody plants, the great majority being...
tree
Tree
A tree is a perennial woody plant. It is most often defined as a woody plant that has many secondary branches supported clear of the ground on a single main stem or trunk with clear apical dominance. A minimum height specification at maturity is cited by some authors, varying from 3 m to...
reaching 25–45 m tall, with a trunk up to 1 m diameter (exceptionally, to 55 m tall and 2 m diameter). The crown is conic when young, becoming broad with age; the main branches are level to upswept, with the side branches often pendulous. The shoots are dimorphic, with growth divided into long shoots (typically 10–50 cm long) and bearing several bud
Bud
In botany, a bud is an undeveloped or embryonic shoot and normally occurs in the axil of a leaf or at the tip of the stem. Once formed, a bud may remain for some time in a dormant condition, or it may form a shoot immediately. Buds may be specialized to develop flowers or short shoots, or may have...
s, and short shoots only 1–2 mm long with only a single bud. The leaves
Leaf
A leaf is an organ of a vascular plant, as defined in botanical terms, and in particular in plant morphology. Foliage is a mass noun that refers to leaves as a feature of plants....
are needle-like, light green, 2–4 cm long which turn bright yellow before they fall in the autumn, leaving the pale yellow-buff shoots bare until the next spring.

The cones
Conifer cone
A cone is an organ on plants in the division Pinophyta that contains the reproductive structures. The familiar woody cone is the female cone, which produces seeds. The male cones, which produce pollen, are usually herbaceous and much less conspicuous even at full maturity...
are erect, ovoid-conic, 2–6 cm long, with 30-70 erect or slightly incurved (not reflexed) seed scales; they are green variably flushed red when immature, turning brown and opening to release the seed
Seed
A seed is a small embryonic plant enclosed in a covering called the seed coat, usually with some stored food. It is the product of the ripened ovule of gymnosperm and angiosperm plants which occurs after fertilization and some growth within the mother plant...
s when mature, 4–6 months after pollination. The old cones commonly remain on the tree for many years, turning dull grey-black.

It is very cold tolerant, able to survive winter temperatures down to at least -50°C, and is among the tree line trees in the Alps, reaching 2400 m altitude, though most abundant from 1000–2000 m. It only grows on well-drained soils, avoiding waterlogged ground.

There are two subspecies:

Larix decidua is cultivated as an ornamental tree for planting in gardens and parks.

Wood
The wood
Wood
Wood is a hard, fibrous tissue found in many trees. It has been used for hundreds of thousands of years for both fuel and as a construction material. It is an organic material, a natural composite of cellulose fibers embedded in a matrix of lignin which resists compression...
is tough and durable, but also flexible in thin strips, and is particularly valued for yacht
Yacht
A yacht is a recreational boat or ship. The term originated from the Dutch Jacht meaning "hunt". It was originally defined as a light fast sailing vessel used by the Dutch navy to pursue pirates and other transgressors around and into the shallow waters of the Low Countries...
building; wood used for this must be free of knots, and can only be obtained from old trees that were pruned
Pruning
Pruning is a horticultural practice involving the selective removal of parts of a plant, such as branches, buds, or roots. Reasons to prune plants include deadwood removal, shaping , improving or maintaining health, reducing risk from falling branches, preparing nursery specimens for...
when young to remove side branches.

Small larch poles are widely used for rustic fencing
Fence
A fence is a freestanding structure designed to restrict or prevent movement across a boundary. It is generally distinguished from a wall by the lightness of its construction: a wall is usually restricted to such barriers made from solid brick or concrete, blocking vision as well as passage .Fences...
.

The European Larch is a popular Bonsai Species, with many unique specimens available in European Circles, and is popularly used in Bonsai Forest Groups.

The seeds are an important food for some bird
Bird
Birds are feathered, winged, bipedal, endothermic , egg-laying, vertebrate animals. Around 10,000 living species and 188 families makes them the most speciose class of tetrapod vertebrates. They inhabit ecosystems across the globe, from the Arctic to the Antarctic. Extant birds range in size from...
s, notably Siskin
Eurasian Siskin
The Eurasian Siskin is a small passerine bird in the finch family Fringillidae. It is also called the European Siskin, Common Siskin or just Siskin. Other names include Black-headed Goldfinch, barley bird and aberdevine. It is very common throughout Europe and Asia...
, Lesser Redpoll
Redpoll
The Redpolls are a group of small passerine birds in the finch family Fringillidae which have characteristic red markings on their heads. They were formerly placed into the genus Acanthis together with the linnets and the twite, but their closest relatives are actually the crossbills, that are...
and Citril Finch
Citril Finch
The Citril Finch is a small songbird, a member of the true finch family Fringillidae. For a long time, this cardueline finch was placed in the genus Serinus, but it is apparently very closely related to the European Goldfinch .This bird is a resident breeder in the mountains of southwestern Europe...
, while the buds and immature cones are eaten by Capercaillie
Capercaillie
The Western Capercaillie , also known as the Wood Grouse, Heather Cock or Capercaillie , is the largest member of the grouse family, reaching over 100 cm in length and 6.7 kg in weight. The largest one ever recorded in captivity had a weight of 7.2 kg....
.

See also List of Lepidoptera that feed on larches


European Larch needles are the only known food for caterpillar
Caterpillar
Caterpillars are the larval form of members of the order Lepidoptera . They are mostly herbivorous in food habit, although some species are insectivorous. Caterpillars are voracious feeders and many of them are considered to be pests in agriculture...
s of the case-bearer moth
Coleophoridae
| name = Case-bearers| image = Coleophoridae-01 .jpg| image_width = 240px| image_caption = Adult of an unidentified case-bearer species| regnum = Animalia| phylum = Arthropoda| classis = Insecta| ordo = Lepidoptera| superfamilia = Gelechioidea...
Coleophora sibiricella
Coleophora sibiricella
Coleophora sibiricella is a moth of the Coleophoridae family. It is found in Finland, Sweden, north-western Russia and Siberia.Adults are on wing in June and July.The larvae feed on Larix species. They have a winter diapause....
; its cone scales are used as food by the caterpillars of the tortrix moth Cydia illutana
Cydia illutana
Cydia illutana is a small moth of the family Tortricidae. It is found from Western and Central Europe , north to Scandinavia and east to Russia ....
.