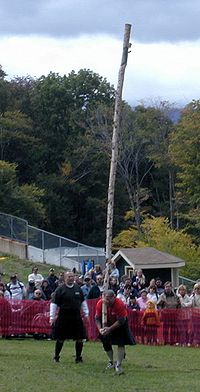 The object is not the sheer distance of the throw, but rather to have the caber fall directly away from the thrower after landing. A perfect throw ends with the 'top' end nearest to the thrower and the 'bottom' end pointing exactly away. If the throw is not perfect, it is scored by viewing the caber as though it were the hour hand on a clock. A perfect toss is 12:00. A caber pointing to 11:00 would yield a better score than one pointing to 10:30 but would be the equivalent of 1:00. If the caber lands on its end and falls back towards the thrower, the score is lower than for any throw that falls away from the thrower but will be based upon the maximum vertical angle that the caber achieved (side-judging may involve a second judge). An angle of 87° is better than 75°. Scoring depends on accuracy, and if the caber did not completely turn once, then it is based on the degree that it rose away from the ground.