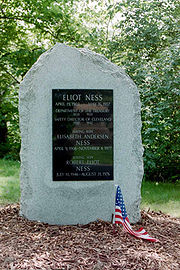 Lake View Cemetery is located on the east side of the City of Cleveland, Ohio
Ohio
Ohio is a Midwestern state in the United States. The 34th largest state by area in the U.S.,it is the 7th‑most populous with over 11.5 million residents, containing several major American cities and seven metropolitan areas with populations of 500,000 or more.The state's capital is Columbus...
, along the East Cleveland
East Cleveland, Ohio
East Cleveland is a city in Cuyahoga County, Ohio, United States, and is the first suburb of Cleveland, Ohio. The population was 17,843 at the 2010 census....
and Cleveland Heights
Cleveland Heights, Ohio
Cleveland Heights is a city in Cuyahoga County, Ohio, United States, a suburb of Cleveland. The city's population was 46,121 at the 2010 census.-Geography:Cleveland Heights is located at ....
borders. There are over 104,000 people buried
Burial
Burial is the act of placing a person or object into the ground. This is accomplished by excavating a pit or trench, placing an object in it, and covering it over.-History:...
at Lake View, with more than 700 burials each year. There are 70 acre (0.2832802 km²) remaining for future development. Known locally as "Cleveland's Outdoor Museum," Lake View Cemetery is home to the James A. Garfield Memorial
James A. Garfield Memorial
The James A. Garfield Memorial was built in memory of the 20th U.S. President, James A. Garfield, who was assassinated in 1881. The memorial is located at 12316 Euclid Avenue in Lake View Cemetery in Cleveland, Ohio...
, Wade Memorial Chapel
Wade Memorial Chapel
The Wade Memorial Chapel is a historic chapel in Cleveland, Ohio, United States. The Neoclassical chapel was built in 1901 in Cleveland's Lake View Cemetery, which is the location of over 104,000 burials. It was listed on the National Register of Historic Places in 1973...
, which features an interior designed by Louis Tiffany, as well as an 80000000 gallons (302,832,960 l) capacity concrete-filled dam.

Lake View Cemetery was founded in 1869 and sits on 285 acres (1.2 km²) of land. The cemetery
Cemetery
A cemetery is a place in which dead bodies and cremated remains are buried. The term "cemetery" implies that the land is specifically designated as a burying ground. Cemeteries in the Western world are where the final ceremonies of death are observed...
is so named because it is partially located in the "heights" area of Greater Cleveland
Greater Cleveland
Greater Cleveland is a nickname for the metropolitan area surrounding Cleveland, Ohio and is part of what used to be the Connecticut Western Reserve.Northeast Ohio refers to a similar but substantially larger area as described below...
, with a view of Lake Erie
Lake Erie
Lake Erie is the fourth largest lake of the five Great Lakes in North America, and the tenth largest globally. It is the southernmost, shallowest, and smallest by volume of the Great Lakes and therefore also has the shortest average water residence time. It is bounded on the north by the...
to the north. It was modeled after the great garden cemeteries of Victorian era
Victorian era
The Victorian era of British history was the period of Queen Victoria's reign from 20 June 1837 until her death on 22 January 1901. It was a long period of peace, prosperity, refined sensibilities and national self-confidence...
England and France. The Italian stonemasons brought in to create the Cemetery founded the Cleveland neighborhood of Little Italy just to its southwest.

The James A. Garfield Memorial
James A. Garfield Memorial
The James A. Garfield Memorial was built in memory of the 20th U.S. President, James A. Garfield, who was assassinated in 1881. The memorial is located at 12316 Euclid Avenue in Lake View Cemetery in Cleveland, Ohio...
is the most prominent point of interest at Lake View Cemetery. The ornate interior features a large marble statue, stained glass
Stained glass
The term stained glass can refer to coloured glass as a material or to works produced from it. Throughout its thousand-year history, the term has been applied almost exclusively to the windows of churches and other significant buildings...
, bas relief, and various historical relics from Garfield's life and presidency. The monument also serves as a scenic observation deck and picnic area. President and Mrs. Garfield
Lucretia Garfield
Lucretia Rudolph Garfield , wife of James A. Garfield, was First Lady of the United States in 1881.-Early life:...
are entombed in the lower level crypt
Crypt
In architecture, a crypt is a stone chamber or vault beneath the floor of a burial vault possibly containing sarcophagi, coffins or relics....
, their coffins placed side by side and visible to cemetery visitors.

The other prominent structure in the cemetery is the Wade Chapel. A small-but-magnificent chapel with Tiffany windows and elaborate Biblically-inspired mosaics on the walls, the edifice is still used for small weddings and located north and down the hill from the Garfield monument. Behind the chapel is a large pond.