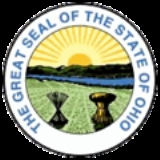 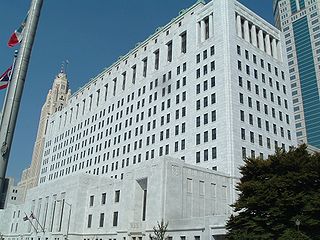 The Supreme Court of Ohio is the highest court
Court
A court is a form of tribunal, often a governmental institution, with the authority to adjudicate legal disputes between parties and carry out the administration of justice in civil, criminal, and administrative matters in accordance with the rule of law...
in the U.S. state
U.S. state
A U.S. state is any one of the 50 federated states of the United States of America that share sovereignty with the federal government. Because of this shared sovereignty, an American is a citizen both of the federal entity and of his or her state of domicile. Four states use the official title of...
of Ohio
Ohio
Ohio is a Midwestern state in the United States. The 34th largest state by area in the U.S.,it is the 7th‑most populous with over 11.5 million residents, containing several major American cities and seven metropolitan areas with populations of 500,000 or more.The state's capital is Columbus...
, with final authority over interpretations of Ohio law and the Ohio Constitution
Ohio Constitution
The Ohio Constitution is the basic governing document of the State of Ohio, which in 1803 became the 17th state to join the United States of America. Ohio has had two constitutions since statehood was granted....
. The court has seven members, a chief justice
Chief Justice of the Ohio Supreme Court
The office of Chief Justice of the Ohio Supreme Court was created in 1912 as an elected office with a term of six years. Prior to this, there were Chief Judges. The office is currently held by Maureen O'Connor.-Chief Judges of the Ohio Supreme Court:...
and six associate justices, each serving six-year terms. Since 2004, the court has met in the Ohio Judicial Center (formerly known as the Ohio Departments Building) on the east bank of the Scioto River
Scioto River
The Scioto River is a river in central and southern Ohio more than 231 miles in length. It rises in Auglaize County in west central Ohio, flows through Columbus, Ohio, where it collects its largest tributary, the Olentangy River, and meets the Ohio River at Portsmouth...
in downtown Columbus
Columbus, Ohio
Columbus is the capital of and the largest city in the U.S. state of Ohio. The broader metropolitan area encompasses several counties and is the third largest in Ohio behind those of Cleveland and Cincinnati. Columbus is the third largest city in the American Midwest, and the fifteenth largest city...
. Prior to 2004, the court met in the James A. Rhodes State Office Tower
Rhodes State Office Tower
The James A. Rhodes State Office Tower is a skyscraper located in Columbus, Ohio. The Rhodes Tower was completed and occupied in 1974, and is currently the tallest building in Columbus and the fifth tallest in Ohio...
and earlier in the Judiciary Annex (now the Senate Building) of the Ohio Statehouse
Ohio Statehouse
The Ohio Statehouse, located in Columbus, Ohio, is the house of government for the state of Ohio. The Greek Revival building houses the Ohio General Assembly and the ceremonial offices of the Governor, Lieutenant Governor, Treasurer, and Auditor....
.

The Ohio Supreme Court and the rest of the judiciary is established and authorized within Article IV of the Ohio Constitution
Ohio Constitution
The Ohio Constitution is the basic governing document of the State of Ohio, which in 1803 became the 17th state to join the United States of America. Ohio has had two constitutions since statehood was granted....
.

All the seats on the court are elected
Election
An election is a formal decision-making process by which a population chooses an individual to hold public office. Elections have been the usual mechanism by which modern representative democracy operates since the 17th century. Elections may fill offices in the legislature, sometimes in the...
at large by the voters of Ohio. Every two years, two of the associate justice seats are up for election. For one of those three elections in a cycle, the chief justice's seat is up for election. In order to run for a seat on the court, a person must be admitted to the Bar in Ohio, and have practiced as a lawyer
Lawyer
A lawyer, according to Black's Law Dictionary, is "a person learned in the law; as an attorney, counsel or solicitor; a person who is practicing law." Law is the system of rules of conduct established by the sovereign government of a society to correct wrongs, maintain the stability of political...
or served as a judge
Judge
A judge is a person who presides over court proceedings, either alone or as part of a panel of judges. The powers, functions, method of appointment, discipline, and training of judges vary widely across different jurisdictions. The judge is supposed to conduct the trial impartially and in an open...
for at least six years. There is an age limit: One may not run for a seat on any Ohio court if one is more than 70 years of age. This limit often forces the retirement of long-time justices. Justice Francis E. Sweeney Sr.
Francis E. Sweeney
Francis Edward Sweeney, Sr. was an American politician and jurist of the Ohio Democratic party. He served as a justice on the Ohio Supreme Court from 1993 to 2004...
was barred by this rule from running for re-election in 2004. However, a judge who reaches the age of 70 is not prevented from completing his term in office.

The Governor of Ohio may appoint a Justice to the Court when there is a vacancy.

Officially, the judicial elections are non-partisan. However, in practical terms, all this means is that party
Political party
A political party is a political organization that typically seeks to influence government policy, usually by nominating their own candidates and trying to seat them in political office. Parties participate in electoral campaigns, educational outreach or protest actions...
designations for the candidates are left off the ballot
Ballot
A ballot is a device used to record choices made by voters. Each voter uses one ballot, and ballots are not shared. In the simplest elections, a ballot may be a simple scrap of paper on which each voter writes in the name of a candidate, but governmental elections use pre-printed to protect the...
and justices are restricted in making public political statements. Major and minor parties all nominate candidates for the court in their primary elections. The vast majority of justices have been nominated by the two major parties in Ohio, Democratic or Republican. Many of the individuals who have contested Supreme Court seats have also contested for explicitly partisan political offices, both state and federal.

From the election of Justice Robert R. Cupp
Robert R. Cupp
Robert R. "Bob" Cupp is a Justice of the Ohio Supreme Court. He was elected November 7, 2006 to a six-year term and was sworn in on January 2, 2007. His term will expire January 1, 2013....
in November 2006 to replace Democrat Alice Robie Resnick
Alice Robie Resnick
Alice Robie Resnick is a former Justice of the Supreme Court of Ohio. In 1988, she was the second woman in Ohio elected and third to serve on the state bench, and was reelected in 1994 and 2000...
until the 2010 appointment of Eric Brown
Eric Brown (judge)
Eric Brown is the former Chief Justice of the Ohio Supreme Court. He was appointed by Governor Ted Strickland on May 3, 2010, following the death of Chief Justice Thomas Moyer on April 2, 2010.Brown was the first Jewish Chief Justice in Ohio history...
as Chief Justice, the Court was all Republican.


Asterisks (*) next to retirement date indicate that the justice will be permitted to complete their current term, but will be barred from running for reelection due to having exceeded the mandatory retirement age (70 years old).

The data contained in the table maybe verified by the interested reader at the Buckeye Institute web page. Please look at
http://www.buckeyeinstitute.org/state-salary Select the judiciary category for which there are about 12,500 entries on 24 pages. If desired one can approximate the name of the individual and thus get a brief more targeted result.