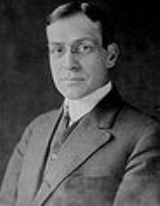 Overview
Newton Diehl Baker, Jr. was an American
United States
The United States of America is a federal constitutional republic comprising fifty states and a federal district...
politician
Politician
A politician, political leader, or political figure is an individual who is involved in influencing public policy and decision making...
who belonged to the Democratic Party
Democratic Party (United States)
The Democratic Party is one of two major contemporary political parties in the United States, along with the Republican Party. The party's socially liberal and progressive platform is largely considered center-left in the U.S. political spectrum. The party has the lengthiest record of continuous...
. He served as the 37th mayor of Cleveland, Ohio from 1912 to 1915 and as U.S. Secretary of War
United States Secretary of War
The Secretary of War was a member of the United States President's Cabinet, beginning with George Washington's administration. A similar position, called either "Secretary at War" or "Secretary of War," was appointed to serve the Congress of the Confederation under the Articles of Confederation...
from 1916 to 1921.
Baker was born on December 3, 1871, in Martinsburg, West Virginia
Martinsburg, West Virginia
Martinsburg is a city in the Eastern Panhandle region of West Virginia, United States. The city's population was 14,972 at the 2000 census; according to a 2009 Census Bureau estimate, Martinsburg's population was 17,117, making it the largest city in the Eastern Panhandle and the eighth largest...
, the son of Newton Diehl Baker and Mary Ann (Dukehart) Baker. In 1892 he graduated from Johns Hopkins University
Johns Hopkins University
The Johns Hopkins University, commonly referred to as Johns Hopkins, JHU, or simply Hopkins, is a private research university based in Baltimore, Maryland, United States...
. After receiving his law degree from Washington and Lee University School of Law
Washington and Lee University School of Law
The Washington and Lee University School of Law is a private American Bar Association-accredited law school located in Lexington in the Shenandoah Valley region of Virginia. Facilities are currently on the campus of Washington and Lee University in Sydney Lewis Hall...
in 1894, he became the private secretary to Postmaster General
United States Postmaster General
The United States Postmaster General is the Chief Executive Officer of the United States Postal Service. The office, in one form or another, is older than both the United States Constitution and the United States Declaration of Independence...
William L. Wilson
William Lyne Wilson
William Lyne Wilson was a Bourbon Democrat politician and lawyer from West Virginia.-Biography:Born in Charles Town, Virginia , Wilson attended Charles Town Academy, graduated from Columbian College in 1860 and subsequently studied at the University of Virginia...
in Washington, D.C.
Washington, D.C.
Washington, D.C., formally the District of Columbia and commonly referred to as Washington, "the District", or simply D.C., is the capital of the United States. On July 16, 1790, the United States Congress approved the creation of a permanent national capital as permitted by the U.S. Constitution....
.