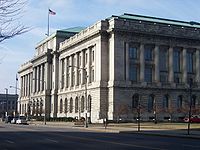 The Mayor of Cleveland is the chief executive
Mayor
In many countries, a Mayor is the highest ranking officer in the municipal government of a town or a large urban city....
of the city
Cleveland, Ohio
Cleveland is a city in the U.S. state of Ohio and is the county seat of Cuyahoga County, the most populous county in the state. The city is located in northeastern Ohio on the southern shore of Lake Erie, approximately west of the Pennsylvania border...
's government. In 1924, the mayor-council (strong mayor) form of government was replaced by a city manager
City manager
A city manager is an official appointed as the administrative manager of a city, in a council-manager form of city government. Local officials serving in this position are sometimes referred to as the chief executive officer or chief administrative officer in some municipalities...
plan. This was later reversed in 1931. Cleveland elections were partisan
Partisan (political)
In politics, a partisan is a committed member of a political party. In multi-party systems, the term is widely understood to carry a negative connotation - referring to those who wholly support their party's policies and are perhaps even reluctant to acknowledge correctness on the part of their...
, but were made nonpartisan
Nonpartisan
In political science, nonpartisan denotes an election, event, organization or person in which there is no formally declared association with a political party affiliation....
in 1977 under the mayoral administration of Ralph J. Perk
Ralph J. Perk
Ralph Joseph Perk was an American politician of the Republican Party who served as the 52nd mayor of Cleveland, Ohio.-Political career:...
. The term of office for the mayor and members of Cleveland City Council
Cleveland City Council
Cleveland City Council is the legislative branch of the government of the City of Cleveland in Ohio. Its members are elected from 19 wards to four-year terms. The number of council members has decreased over the years...
was traditionally two years, and was extended to four years in 1981.

Cleveland has had a total of 57 mayoral administrations, including the city's current mayor, Frank G. Jackson
Frank G. Jackson
Frank George Jackson is an American attorney and politician. He is currently the Mayor of Cleveland, Ohio. He was elected on November 8, 2005, unseating incumbent Jane Campbell and re-elected in 2009...
. Seven of these were nonconsecutive served terms by earlier mayors. Cleveland's official website lists 53 mayors; it does not count the second nonconsecutive terms of Joshua Mills
Joshua Mills
Joshua Mills was a pioneer physician and an American politician of the Whig Party who served as the second mayor of Cleveland, Ohio from 1838 to 1839 and later as the city's fifth mayor in 1842....
, George B. Senter
George B. Senter
George B. Senter was the mayor of Cleveland from 1859 to 1860.Senter was born in Potsdam, New York to David K. and Susan Senter. Senter was elected to city council from the 1st ward in 1858 and was then elected to mayor in 1859 serving until 1860...
, and John H. Farley
John H. Farley
John Harrington Farley , also known as "Honest John" Farley, was an American politician of the Democratic Party who served as the 27th and 34th mayor of Cleveland, Ohio from 1883 to 1884 and from 1899 to 1900....
, and does not list Mayor Jackson. During the 2005 mayoral election, most media sources including The Plain Dealer and the city's major local news networks (WKYC, WEWS, WJW, and WOIO
WOIO
WOIO, virtual channel 19 , is the CBS affiliate in Cleveland, Ohio. It is licensed to the nearby suburb of Shaker Heights. WOIO is owned by Raycom Media and its sister station to MyNetworkTV affiliate WUAB . The two stations share a studio facility in Cleveland and WOIO's transmitter is located in...
) all mistakenly referred to Jackson as Cleveland's 56th mayor.

Prior to its annexation, Ohio City was a separate entity and fierce rival of Cleveland. The city had eleven mayors from 1836 to 1854. The political affiliations of these mayors are currently unknown, although William B. Castle
William B. Castle
William Bainbridge Castle was an American politician of the Whig Party who served as the 11th and final mayor of Ohio City from 1853 to 1854 and the 14th mayor of Cleveland, Ohio from 1855 and 1856....
became mayor of Cleveland as a Whig after Ohio City's incorporation.