Encyclopedia
Kufstein is a city in Tyrol
Tyrol (state)
Tyrol is a state or Bundesland, located in the west of Austria. It comprises the Austrian part of the historical region of Tyrol.The state is split into two parts–called North Tyrol and East Tyrol–by a -wide strip of land where the state of Salzburg borders directly on the Italian province of...
, Austria
Austria
Austria , officially the Republic of Austria , is a landlocked country of roughly 8.4 million people in Central Europe. It is bordered by the Czech Republic and Germany to the north, Slovakia and Hungary to the east, Slovenia and Italy to the south, and Switzerland and Liechtenstein to the...
, located along the river Inn
Inn River
The Inn is a river in Switzerland, Austria and Germany. It is a right tributary of the Danube and is approximately 500km long. The highest point of its drainage basin is the summit of Piz Bernina, at 4,049 metres.- Geography :...
, in the lower Inn valley, near the border with Bavaria
Bavaria
Bavaria, formally the Free State of Bavaria is a state of Germany, located in the southeast of Germany. With an area of , it is the largest state by area, forming almost 20% of the total land area of Germany...
, Germany
Germany
Germany , officially the Federal Republic of Germany , is a federal parliamentary republic in Europe. The country consists of 16 states while the capital and largest city is Berlin. Germany covers an area of 357,021 km2 and has a largely temperate seasonal climate...
, and is the site of a post World War II
World War II
World War II, or the Second World War , was a global conflict lasting from 1939 to 1945, involving most of the world's nations—including all of the great powers—eventually forming two opposing military alliances: the Allies and the Axis...
French sector United Nations Relief and Rehabilitation Administration
United Nations Relief and Rehabilitation Administration
The United Nations Relief and Rehabilitation Administration was an international relief agency, largely dominated by the United States but representing 44 nations. Founded in 1943, it became part of the United Nations in 1945, was especially active in 1945 and 1946, and largely shut down...
Displaced Persons camp
Displaced persons camp
A displaced persons camp or DP camp is a temporary facility for displaced persons coerced into forced migration. The term is mainly used for camps established after World War II in West Germany and in Austria, as well as in the United Kingdom, primarily for refugees from Eastern Europe and for the...
.

Kufstein is the second largest city in Tyrol and capital of the district (Bezirk
Bezirk
Bezirk means "district" in German and can refer to:* The primary Subdivisions of East Germany from 1952* The districts of Austria* Some of the Districts of Switzerland...
) Kufstein
Kufstein (district)
The Bezirk Kufstein is an administrative district in Tyrol, Austria. It borders Bavaria in the north, the Kitzbühel district in the southeast, and the Schwaz district in the southwest....
.

The greatest landmark
Landmark
This is a list of landmarks around the world.Landmarks may be split into two categories - natural phenomena and man-made features, like buildings, bridges, statues, public squares and so forth...
of Kufstein is the Kufstein Fortress
Kufstein Fortress
The Kufstein Fortress is the main landmark of Kufstein, a city of Tyrol in Austria. It is sometimes wrongly referred to as Geroldseck Fortress. It is located on a hill commanding Kufstein proper.-History:...
, which was first mentioned in the 13th century.

Glass manufacturer Riedel
Riedel
Riedel l), is a manufacturer of high-quality crystal wine glasses and related glass products based in Kufstein, Austria.Originally established in Bohemia in 1756, the company has been owned by the same family for more than 250 years...
, gunmaker Voere
Voere
Voere is an Austrian gunmaker best known for its VEC-91 bolt-action rifle using caseless ammunition. The origins of the company date back to the 1948 establishment of the metal-working company Koma in West Germany. Originally producing bicycle tire pumps, the company branched out into the...
, and ski and tennis racket manufacturer Kneissl
Kneissl
Kneissl is an Austrian manufacturer of hand made skis, biking and tennis equipment and apparel, based in Kufstein in the state of Tyrol and established by Franz Kneissl in 1861. Kneissl was accredited with the invention of “big foot” skis.-External links:...
are based in Kufstein.

Due to its long history, the city of Kufstein has various sights to offer: 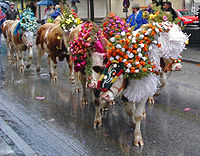 Kufstein has two exits along the A12 motorway (autobahn) from Innsbruck
Innsbruck
- Main sights :- Buildings :*Golden Roof*Kaiserliche Hofburg *Hofkirche with the cenotaph of Maximilian I, Holy Roman Emperor*Altes Landhaus...
to Rosenheim
Rosenheim
Rosenheim is a town in Bavaria at the confluence of the rivers Inn and Mangfall. It is seat of administration of the district of Rosenheim, but is not a part of it.-Geography:...
.

Kufstein railway station
Kufstein railway station
Kufstein railway station serves the city of Kufstein, in the Kufstein district of the Austrian federal state of Tyrol. Opened in 1876, it is an Austrian-German border station, close to the border between Tyrol and Bavaria....
, opened in 1876, forms part of the Lower Inn Valley railway
Lower Inn Valley railway
The Lower Inn Valley Railway is a two-track, electrified railway line that is one of the major lines of the Austrian railways. It was originally opened as the k.k. Nordtiroler Staatsbahn . It begins at the national border at Kufstein as a continuation of the Rosenheim–Kufstein line and runs...
section of the Brenner-axis from Munich
Munich
Munich The city's motto is "" . Before 2006, it was "Weltstadt mit Herz" . Its native name, , is derived from the Old High German Munichen, meaning "by the monks' place". The city's name derives from the monks of the Benedictine order who founded the city; hence the monk depicted on the city's coat...
to Verona
Verona
Verona ; German Bern, Dietrichsbern or Welschbern) is a city in the Veneto, northern Italy, with approx. 265,000 inhabitants and one of the seven chef-lieus of the region. It is the second largest city municipality in the region and the third of North-Eastern Italy. The metropolitan area of Verona...
.

Kufstein is twinned with
Town twinning
Twin towns and sister cities are two of many terms used to describe the cooperative agreements between towns, cities, and even counties in geographically and politically distinct areas to promote cultural and commercial ties.- Terminology :...
Frauenfeld
Frauenfeld
Frauenfeld is the capital of the canton of Thurgau in Switzerland.-Early history:The earliest trace of human settlement are several La Tène era graves to the east of Langdorf. The Roman road from Oberwinterthur to Pfyn ran through what is now the Allmend in Frauenfeld. Two Roman villas were...
, Switzerland
Switzerland
Switzerland name of one of the Swiss cantons. ; ; ; or ), in its full name the Swiss Confederation , is a federal republic consisting of 26 cantons, with Bern as the seat of the federal authorities. The country is situated in Western Europe,Or Central Europe depending on the definition....
Rovereto
Rovereto
Rovereto is a city and comune in Trentino in northern Italy, located in the Vallagarina valley of the Adige River.-History:Rovereto was an ancient fortress town standing at the frontier between the bishopric of Trento - an independent state until 1797 - and the republic of Venice, and later...
in Italy
Italy
Italy , officially the Italian Republic languages]] under the European Charter for Regional or Minority Languages. In each of these, Italy's official name is as follows:;;;;;;;;), is a unitary parliamentary republic in South-Central Europe. To the north it borders France, Switzerland, Austria and...