Encyclopedia
Rovereto is a city and comune in Trentino in northern Italy
Italy
Italy , officially the Italian Republic languages]] under the European Charter for Regional or Minority Languages. In each of these, Italy's official name is as follows:;;;;;;;;), is a unitary parliamentary republic in South-Central Europe. To the north it borders France, Switzerland, Austria and...
, located in the Vallagarina
Vallagarina
The Lagarina Valley is a valley in northern Italy, used to define the lower mountain course of the Adige River. It is mostly included in the province of Trentino, with the lower section being part of the province of Verona. The largest town is Rovereto....
valley of the Adige River.

In the area of Lavini di Marco footprints of dinosaurs have been found. The species have been identified as the herbivorous Camptosaurus
Camptosaurus
Camptosaurus is a genus of plant-eating, beaked ornithischian dinosaurs of the Late Jurassic period of western North America. The name means 'flexible lizard', ....
and carnivorous Dilophosaurus
Dilophosaurus
Dilophosaurus was a theropod dinosaur from the Sinemurian stage of the Early Jurassic Period, about 193 million years ago. The first specimens were described in 1954, but it was not until over a decade later that the genus received its current name...
. 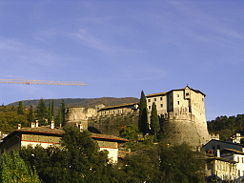 In the past Rovereto was an important centre for the manufacture of silk
Silk
Silk is a natural protein fiber, some forms of which can be woven into textiles. The best-known type of silk is obtained from the cocoons of the larvae of the mulberry silkworm Bombyx mori reared in captivity...
. Current production include those of wine, rubber, chocolate, glasses and coffee.

Rovereto is the birthplace (1941) of Sferoflex eyeglasses, now taken over by Luxottica
Luxottica
Luxottica Group S.p.A. is the world's largest eyewear company. Its best known brands include Ray-Ban, Persol and Oakley, Inc.. It also makes sunglasses and prescription frames for a multitude of designer brands such as Chanel and Prada, whose designs and trademarks are used under license...
. Other relevant companies located in Rovereto are Marangoni Pneumatici, Lepetit, Cioccolato Cisa, Metalsistem.

Rovereto railway station
Rovereto railway station
Rovereto railway station serves the city and comune of Rovereto, in the autonomous province of Trentino, northeastern Italy. Opened in 1859, it forms part of the Brenner railway, which links Verona with Innsbruck....
, opened in 1859, forms part of the Brenner railway
Brenner railway
The Brenner Railway is a major line connecting the Austrian and Italian railways from Innsbruck and Verona climbing the Wipptal , passing over the Brenner Pass and descending down the Eisack Valley to Bolzano and then down the Adige Valley from Bolzano to Rovereto and from there along the...
, which links Verona
Verona Porta Nuova railway station
Verona Porta Nuova is the main railway station of the Italian city of Verona near the city centre in the square of Piazzale 25 Aprile. It was originally opened in 1852, but was substantially rebuilt between 1910 and 1922. It was rebuilt again between 1946 and 1949 after being largely destroyed by...
with Innsbruck
Innsbruck Hauptbahnhof
is the Hauptbahnhof at Innsbruck, the capital city of the Austrian federal state of Tyrol. Opened in 1853, it is one of the country's busiest railway stations, with around 25,000 passenger movements daily....
.

Bento Gonçalves
Bento Gonçalves
Bento Gonçalves may refer to:* Bento António Gonçalves, member of the Portuguese Communist Party* Bento Gonçalves da Silva, Tatter revolutionary leader* Bento Gonçalves, Rio Grande do Sul, a town located in the Brazilian state of Rio Grande do Sul...
, Brazil Dolní Dobrouč
Dolní Dobrouc
Dolní Dobrouč is a village in the Pardubice Region of the Czech Republic. It has around 2,500 inhabitants.Villages Horní Dobrouč and Lanšperk are administrative parts of Dolní Dobrouč.-External links:*...
, Czech Republic Forchheim
Forchheim
Forchheim may refer to the following places in Germany:*Forchheim, capital of the district of Forchheim, Bavaria*Forchheim am Kaiserstuhl, a municipality in Baden-Württemberg*Forchheim , part of Rheinstetten, Baden-Württemberg...
, Germany Kufstein
Kufstein
Kufstein is a city in Tyrol, Austria, located along the river Inn, in the lower Inn valley, near the border with Bavaria, Germany, and is the site of a post World War II French sector United Nations Relief and Rehabilitation Administration Displaced Persons camp.Kufstein is the second largest city...
, Austria