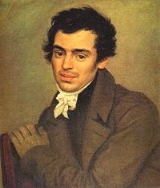 Encyclopedia
Konstantin Andreyevich Thon, also spelled Ton was an official architect
Architect
An architect is a person trained in the planning, design and oversight of the construction of buildings. To practice architecture means to offer or render services in connection with the design and construction of a building, or group of buildings and the space within the site surrounding the...
of Imperial Russia
Russian Empire
The Russian Empire was a state that existed from 1721 until the Russian Revolution of 1917. It was the successor to the Tsardom of Russia and the predecessor of the Soviet Union...
during the reign of Nicholas I
Nicholas I of Russia
Nicholas I , was the Emperor of Russia from 1825 until 1855, known as one of the most reactionary of the Russian monarchs. On the eve of his death, the Russian Empire reached its historical zenith spanning over 20 million square kilometers...
. His major works include the Cathedral of Christ the Saviour, the Grand Kremlin Palace
Grand Kremlin Palace
The Grand Kremlin Palace , also translated Great Kremlin Palace, was built from 1837 to 1849 in Moscow, Russia on the site of the estate of the Grand Princes, which had been established in the 14th century on Borovitsky Hill...
and the Kremlin Armoury
Kremlin Armoury
The Kremlin Armory is one of the oldest museums of Moscow, established in 1808 and located in the Moscow Kremlin .The Kremlin Armoury originated as the royal arsenal in 1508. Until the transfer of the court to St Petersburg, the Armoury was in charge of producing, purchasing and storing weapons,...
in Moscow
Moscow
Moscow is the capital, the most populous city, and the most populous federal subject of Russia. The city is a major political, economic, cultural, scientific, religious, financial, educational, and transportation centre of Russia and the continent...
.

Konstantin, born in St. Petersburg to the family of a German jeweller, was one of three Thon brothers who all rose to become notable architects. He studied at the Imperial Academy of Arts (1803–15) under the Empire Style architect Andrey Voronikhin
Andrey Voronikhin
Andrey Nikiforovich Voronikhin was a Russian architect and painter. As a representative of classicism he was also one of the founders of the monumental Russian Empire style...
, best remembered for his work on the Kazan Cathedral, situated right in the middle of the Nevsky Prospekt
Nevsky Prospekt
Nevsky Avenue |Prospekt]]) is the main street in the city of St. Petersburg, Russia. Planned by Peter the Great as beginning of the road to Novgorod and Moscow, the avenue runs from the Admiralty to the Moscow Railway Station and, after making a turn at Vosstaniya Square, to the Alexander...
. He studied Italian
Italy
Italy , officially the Italian Republic languages]] under the European Charter for Regional or Minority Languages. In each of these, Italy's official name is as follows:;;;;;;;;), is a unitary parliamentary republic in South-Central Europe. To the north it borders France, Switzerland, Austria and...
art in Rome from 1819 to 1828, and on his return home was admitted to the academy as its member (1830) and professor (1833). In 1854, he was appointed rector
Rector
The word rector has a number of different meanings; it is widely used to refer to an academic, religious or political administrator...
of the architectural division of the academy.

Thon first attracted public attention with his sumptuous design for the interiors of the Academy building on the Neva embankment. In 1827, he submitted to the tsar his project of St Catherine church at the Obvodnyi Canal, the first ever design in the Russian Revival
Russian Revival
The Russian Revival style is the generic term for a number of different movements within Russian architecture that arose in second quarter of the 19th century and was an eclectic melding of pre-Peterine Russian architecture and elements of Byzantine architecture.The Russian Revival style arose...
style. Nicholas I, who felt disaffected with the prevailing Neoclassicism
Neoclassicism
Neoclassicism is the name given to Western movements in the decorative and visual arts, literature, theatre, music, and architecture that draw inspiration from the "classical" art and culture of Ancient Greece or Ancient Rome...
of Russian architecture, remarked that "Russians have their own great art traditions and don't need to cringe before Rome
Rome
Rome is the capital of Italy and the country's largest and most populated city and comune, with over 2.7 million residents in . The city is located in the central-western portion of the Italian Peninsula, on the Tiber River within the Lazio region of Italy.Rome's history spans two and a half...
". Thon's project was to become a revered model for other churches in St Petersburg and across Russia.

In 1830, Thon completed his most ambitious design to date, that of the Cathedral of Christ the Saviour in Moscow. The Russian-Byzantine Revival style of his project, intended to underline similarity of the new church with old cathedrals of the Moscow Kremlin
Moscow Kremlin
The Moscow Kremlin , sometimes referred to as simply The Kremlin, is a historic fortified complex at the heart of Moscow, overlooking the Moskva River , Saint Basil's Cathedral and Red Square and the Alexander Garden...
, displeased many of his fellows, who wanted to see the cathedral built in the severe Neoclassical
Neoclassicism
Neoclassicism is the name given to Western movements in the decorative and visual arts, literature, theatre, music, and architecture that draw inspiration from the "classical" art and culture of Ancient Greece or Ancient Rome...
style. Nevertheless, the emperor personally approved his design. Thon and his disciples continued to work on the cathedral for the next 50 years, until the master's death in 1881. 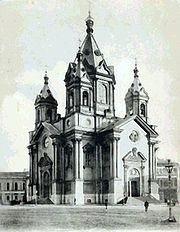 In 1836-42, Thon supervised the construction of another ponderous church with a spacious interior, that of Presentation to the Temple for the Semenovsky regiment in St Petersburg. He followed this with dozens of Neo-Russian-Byzantine designs for churches and cathedrals in provincial towns, including Sveaborg
Suomenlinna
Suomenlinna, until 1918 Viapori , or Sveaborg , is an inhabited sea fortress built on six islands , and which now forms part of the city of Helsinki, the capital of Finland.Suomenlinna is a UNESCO World Heritage site and popular with both tourists and locals, who...
, Yelets
Yelets
Yelets is a city in Lipetsk Oblast, Russia, situated on the Sosna River, which is a tributary of the Don. Population: -History:Yelets is the oldest center of the Central Black Earth Region. It is mentioned in historical documents as far back as 1146, when it belonged to the Princes of Ryazan...
, Tomsk
Tomsk
Tomsk is a city and the administrative center of Tomsk Oblast, Russia, located on the Tom River. One of the oldest towns in Siberia, Tomsk celebrated its 400th anniversary in 2004...
, Rostov-on-Don
Rostov-on-Don
-History:The mouth of the Don River has been of great commercial and cultural importance since the ancient times. It was the site of the Greek colony Tanais, of the Genoese fort Tana, and of the Turkish fortress Azak...
, and Krasnoyarsk
Krasnoyarsk
Krasnoyarsk is a city and the administrative center of Krasnoyarsk Krai, Russia, located on the Yenisei River. It is the third largest city in Siberia, with the population of 973,891. Krasnoyarsk is an important junction of the Trans-Siberian Railway and one of Russia's largest producers of...
. Some of his revivalist projects were assembled in the Model Album for Church Designs (1836).

From 1838 to 1851, Thon was employed in construction of the Neo-Russian Grand Kremlin Palace
Grand Kremlin Palace
The Grand Kremlin Palace , also translated Great Kremlin Palace, was built from 1837 to 1849 in Moscow, Russia on the site of the estate of the Grand Princes, which had been established in the 14th century on Borovitsky Hill...
and the Kremlin Armoury
Kremlin Armoury
The Kremlin Armory is one of the oldest museums of Moscow, established in 1808 and located in the Moscow Kremlin .The Kremlin Armoury originated as the royal arsenal in 1508. Until the transfer of the court to St Petersburg, the Armoury was in charge of producing, purchasing and storing weapons,...
in Moscow
Moscow
Moscow is the capital, the most populous city, and the most populous federal subject of Russia. The city is a major political, economic, cultural, scientific, religious, financial, educational, and transportation centre of Russia and the continent...
. The grandiose palace
Palace
A palace is a grand residence, especially a royal residence or the home of a head of state or some other high-ranking dignitary, such as a bishop or archbishop. The word itself is derived from the Latin name Palātium, for Palatine Hill, one of the seven hills in Rome. In many parts of Europe, the...
, famed for opulent interiors of its 700 rooms and hall
Hall
In architecture, a hall is fundamentally a relatively large space enclosed by a roof and walls. In the Iron Age, a mead hall was such a simple building and was the residence of a lord and his retainers...
s, was meant to symbolize the grandeur of the Russian state. It was a daring design which incorporated parts of earlier structures that had been standing on the spot. The palace has served successively as an official residence
House
A house is a building or structure that has the ability to be occupied for dwelling by human beings or other creatures. The term house includes many kinds of different dwellings ranging from rudimentary huts of nomadic tribes to free standing individual structures...
for the Russian tsars, Soviet rulers, and the Presidents of the Russian Federation. At the same time, Thon rehabilitated the abandoned Izmaylovo Estate
Izmaylovo Estate
Izmaylovo Estate was a country residence of the House of Romanov built in the reign of Alexis I of Russia. Originally located 7 kilometres east of Moscow's city limits, it became part of the expanding city in the 20th century...
into an almshouse for the veterans of the Napoleonic Wars
Napoleonic Wars
The Napoleonic Wars were a series of wars declared against Napoleon's French Empire by opposing coalitions that ran from 1803 to 1815. As a continuation of the wars sparked by the French Revolution of 1789, they revolutionised European armies and played out on an unprecedented scale, mainly due to...
.

Thon's last important commissions were the Nikolaevsky railway stations in Moscow
Moscow
Moscow is the capital, the most populous city, and the most populous federal subject of Russia. The city is a major political, economic, cultural, scientific, religious, financial, educational, and transportation centre of Russia and the continent...
and Saint Petersburg
Saint Petersburg
Saint Petersburg is a city and a federal subject of Russia located on the Neva River at the head of the Gulf of Finland on the Baltic Sea...
(1849–51). In his design for the stations the architect implemented some of the newest construction technologies. Despite large pieces of steelwork used in the construction, Venetian facades and medieval clock tower
Clock tower
A clock tower is a tower specifically built with one or more clock faces. Clock towers can be either freestanding or part of a church or municipal building such as a town hall. Some clock towers are not true clock towers having had their clock faces added to an already existing building...
s of the stations cleverly masked their modern function. Both structures, although extensively reconstructed, are still standing.

After the death of his patron, the Emperor, Thon's failing health prevented him from working on other projects apart from the great cathedral in Moscow. He died at St. Petersburg in 1881.

Even during his lifetime, the more radical of his contemporaries, such as Alexander Herzen
Alexander Herzen
Aleksandr Ivanovich Herzen was a Russian pro-Western writer and thinker known as the "father of Russian socialism", and one of the main fathers of agrarian populism...
, dismissed his architecture as "reactionary manifestation of the tyrant's rule". The Soviet authorities, labelling Thon's churches ugly chests of drawers, systematically destroyed as many of them as possible, including all his churches in St Petersburg and vicinity and the work of his life, the Cathedral of Christ the Saviour. The fall of the Soviet rule in 1991 brought about a renewed interest in the work of the Neo-Russian-Byzantine master.