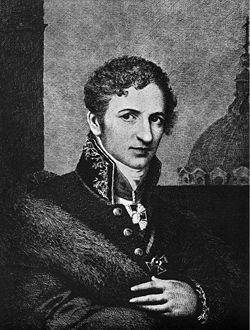 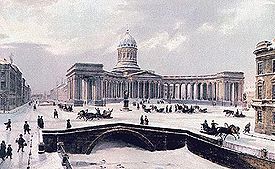 Andrey Nikiforovich Voronikhin (17 October 1759, Novoe Usolye, Perm Oblast
Perm Oblast
Until December 1, 2005, Perm Oblast was a federal subject of Russia in Privolzhsky Federal District. According to the results of the referendum held in October 2004, Perm Oblast was merged with Komi-Permyak Autonomous Okrug to form Perm Krai.The oblast was named after its administrative center,...
— 21 February 1814, Saint Petersburg
Saint Petersburg
Saint Petersburg is a city and a federal subject of Russia located on the Neva River at the head of the Gulf of Finland on the Baltic Sea...
) was a Russian
Russians
The Russian people are an East Slavic ethnic group native to Russia, speaking the Russian language and primarily living in Russia and neighboring countries....
architect
Architect
An architect is a person trained in the planning, design and oversight of the construction of buildings. To practice architecture means to offer or render services in connection with the design and construction of a building, or group of buildings and the space within the site surrounding the...
and painter
Painting
Painting is the practice of applying paint, pigment, color or other medium to a surface . The application of the medium is commonly applied to the base with a brush but other objects can be used. In art, the term painting describes both the act and the result of the action. However, painting is...
. As a representative of classicism
Classicism
Classicism, in the arts, refers generally to a high regard for classical antiquity, as setting standards for taste which the classicists seek to emulate. The art of classicism typically seeks to be formal and restrained: of the Discobolus Sir Kenneth Clark observed, "if we object to his restraint...
he was also one of the founders of the monumental Russian Empire style. Born a serf of the Stroganov family, he is best known for his work on Kazan Cathedral in Saint Petersburg.

Andrey Voronikhin was born in the village of Novoa Usolye (now Perm Krai
Perm Krai
Perm Krai is a federal subject of Russia that came into existence on December 1, 2005 as a result of the 2004 referendum on the merger of Perm Oblast and Komi-Permyak Autonomous Okrug. The city of Perm became the administrative center of the new federal subject...
) to a family who were the serfs of count Alexander Sergeyevich Stroganov
Alexander Sergeyevich Stroganov
Alexander Sergeyevich Stroganov was a Russian baron and a member of the Stroganovs family. He was a member of the Private Committee of Alexander I and assistant to the Minister of the Interior, a long time President of the Imperial Academy of Arts, director of the Russian Imperial Library and a...
, a long time President of the Imperial Academy of Arts
Imperial Academy of Arts
The Russian Academy of Arts, informally known as the St. Petersburg Academy of Arts, was founded in 1757 by Ivan Shuvalov under the name Academy of the Three Noblest Arts. Catherine the Great renamed it the Imperial Academy of Arts and commissioned a new building, completed 25 years later in 1789...
. It is generally believed that he was fathered by Alexander Stroganov. Voronikhin trained in painting in the workshop of Ural iconographer Gabriel Yushkova. The talents of his youth attracted Stroganov's attention, and in 1777 the count sent Voronikhin to study in Moscow. Among his teachers were Vasili Ivanovich Bazhenov
Vasili Bazhenov
Vasily Ivanovich Bazhenov was a Russian neoclassical architect, graphic artist, architectural theorist and educator...
and Matvey Fyodorovich Kazakov
Matvey Kazakov
Matvey Fyodorovich Kazakov was a Russian Neoclassical architect. Kazakov was one of the most influential Muscovite architects during the reign of Catherine II, completing numerous private residences, two royal palaces, two hospitals, Moscow University, and the Kremlin Senate...
. After 1779 Voronikhin worked in Saint Petersburg.

In 1785 Voronikhin was liberated. From 1786 through 1790 he studied architecture, mechanics and mathematics in France and Switzerland.

In 1797 the artist obtained the academic title of «перспективной живописи» from the Academy of Fine Arts for the pictures «Вид картинной галереи в Строгановском дворце» (1793, Hermitage
Hermitage Museum
The State Hermitage is a museum of art and culture in Saint Petersburg, Russia. One of the largest and oldest museums of the world, it was founded in 1764 by Catherine the Great and has been opened to the public since 1852. Its collections, of which only a small part is on permanent display,...
) and «Вид Строгановской дачи» (1797, Russian museum
Russian Museum
The State Russian Museum is the largest depository of Russian fine art in St Petersburg....
, Saint Petersburg). From the beginning of the 19th century he taught at the Academy of Fine Arts.

The earliest architecture of Voronikhin includes finishing the interiors of Stroganov Palace
Stroganov Palace
The Stroganov Palace is a Late Baroque palace at the intersection of the Moika River and Nevsky Prospekt in Saint Petersburg, Russia. The palace was built to Bartolomeo Rastrelli's designs for Baron Sergei Grigoriyevich Stroganov in 1753-1754...
(1793). The magnificent baroque
Baroque
The Baroque is a period and the style that used exaggerated motion and clear, easily interpreted detail to produce drama, tension, exuberance, and grandeur in sculpture, painting, literature, dance, and music...
forms, proposed by Rastrelli, were replaced by Voronikhin with a strict classical order, characterized by simplicity and refinement. Furthermore, he reconstructed the interiors of the Stroganov Dacha
Dacha
Dacha is a Russian word for seasonal or year-round second homes often located in the exurbs of Soviet and post-Soviet cities. Cottages or shacks serving as family's main or only home are not considered dachas, although many purpose-built dachas are recently being converted for year-round residence...
on the Black River (1795 - 1796), and also built estates in Gorodnya (1798).

The main creation of Voronikhin was Kazan Cathedral in Saint Petersburg. The construction began on 27 March 1801, and work was finished in 1811. On the occasion of renovating the temple, Voronikhin was granted a pension and the order of Saint Anne of the second degree.

The architect died on 5 March 1814 in Saint Petersburg.

Voronikhin's nephew, Nikolay Ilyich Voronikhin, was an architect based in Ryazan
Ryazan
Ryazan is a city and the administrative center of Ryazan Oblast, Russia. It is located on the Oka River southeast of Moscow. Population: The strategic bomber base Dyagilevo is just west of the city, and the air base of Alexandrovo is to the southeast as is the Ryazan Turlatovo Airport...
. He inherited Andrey Voronikhin's archive; Ascension Cathedral in Kasimov
Kasimov
Kasimov is a town in Ryazan Oblast, Russia, which serves as the administrative center of Kasimovsky District . The town is situated on the left bank of the Oka River...
(photo) by Nikolay Voronikhin is remotely based on Andrey Voronikhin's unrealized draft for Cathedral of Christ the Saviour in Moscow.