Encyclopedia
A knockout mouse is a genetically engineered
Genetic engineering
Genetic engineering, also called genetic modification, is the direct human manipulation of an organism's genome using modern DNA technology. It involves the introduction of foreign DNA or synthetic genes into the organism of interest...
mouse
House mouse
The house mouse is a small rodent, a mouse, one of the most numerous species of the genus Mus.As a wild animal the house mouse mainly lives associated with humans, causing damage to crops and stored food....
in which researchers have inactivated, or "knocked out," an existing gene
Gene
A gene is a molecular unit of heredity of a living organism. It is a name given to some stretches of DNA and RNA that code for a type of protein or for an RNA chain that has a function in the organism. Living beings depend on genes, as they specify all proteins and functional RNA chains...
by replacing it or disrupting it with an artificial piece of DNA
DNA
Deoxyribonucleic acid is a nucleic acid that contains the genetic instructions used in the development and functioning of all known living organisms . The DNA segments that carry this genetic information are called genes, but other DNA sequences have structural purposes, or are involved in...
. The loss of gene activity often causes changes in a mouse's phenotype
Phenotype
A phenotype is an organism's observable characteristics or traits: such as its morphology, development, biochemical or physiological properties, behavior, and products of behavior...
, which includes appearance, behavior and other observable physical and biochemical characteristics.

Knockout mice are important animal model
Animal model
An animal model is a living, non-human animal used during the research and investigation of human disease, for the purpose of better understanding the disease without the added risk of causing harm to an actual human being during the process...
s for studying the role of genes which have been sequenced
Sequencing
In genetics and biochemistry, sequencing means to determine the primary structure of an unbranched biopolymer...
but whose functions have not been determined. By causing a specific gene to be inactive in the mouse, and observing any differences from normal behaviour or physiology, researchers can infer its probable function.

Mice are currently the most closely related laboratory animal species
Model organism
A model organism is a non-human species that is extensively studied to understand particular biological phenomena, with the expectation that discoveries made in the organism model will provide insight into the workings of other organisms. Model organisms are in vivo models and are widely used to...
to human
Human
Humans are the only living species in the Homo genus...
s for which the knockout technique can easily be applied. They are widely used in knockout experiments, especially those investigating genetic questions that relate to human physiology
Human physiology
Human physiology is the science of the mechanical, physical, bioelectrical, and biochemical functions of humans in good health, their organs, and the cells of which they are composed. Physiology focuses principally at the level of organs and systems...
. Gene knockout
Gene knockout
A gene knockout is a genetic technique in which one of an organism's genes is made inoperative . Also known as knockout organisms or simply knockouts, they are used in learning about a gene that has been sequenced, but which has an unknown or incompletely known function...
in rats
Brown Rat
The brown rat, common rat, sewer rat, Hanover rat, Norway rat, Brown Norway rat, Norwegian rat, or wharf rat is one of the best known and most common rats....
is much harder and has only been possible since 2003.

The first recorded knockout mouse was created by Mario R. Capecchi
Mario Capecchi
Mario Renato Capecchi is an Italian-born American molecular geneticist and a co-winner of the 2007 Nobel Prize in Physiology or Medicine for discovering a method for introducing homologous recombination in mice employing embryonic stem cells, with Martin Evans and Oliver Smithies...
, Martin Evans
Martin Evans
Sir Martin John Evans FRS is a British scientist who, with Matthew Kaufman, was the first to culture mice embryonic stem cells and cultivate them in a laboratory in 1981...
and Oliver Smithies
Oliver Smithies
Oliver Smithies is a British-born American geneticist and Nobel laureate, credited with the invention of gel electrophoresis in 1955, and the simultaneous discovery, with Mario Capecchi and Martin Evans, of the technique of homologous recombination of transgenic DNA with genomic DNA, a much more...
in 1989, for which they were awarded the Nobel Prize
Nobel Prize
The Nobel Prizes are annual international awards bestowed by Scandinavian committees in recognition of cultural and scientific advances. The will of the Swedish chemist Alfred Nobel, the inventor of dynamite, established the prizes in 1895...
for Medicine in 2007. Aspects of the technology for generating knockout mice, and the mice themselves have been patent
Patent
A patent is a form of intellectual property. It consists of a set of exclusive rights granted by a sovereign state to an inventor or their assignee for a limited period of time in exchange for the public disclosure of an invention....
ed in many countries by private companies.

Knocking out the activity of a gene provides information about what that gene normally does. Humans share many genes with mice. Consequently, observing the characteristics of knockout mice gives researchers information that can be used to better understand how a similar gene may cause or contribute to disease in humans.

Examples of research in which knockout mice have been useful include studying and modeling different kinds of cancer
Cancer
Cancer , known medically as a malignant neoplasm, is a large group of different diseases, all involving unregulated cell growth. In cancer, cells divide and grow uncontrollably, forming malignant tumors, and invade nearby parts of the body. The cancer may also spread to more distant parts of the...
, obesity
Obesity
Obesity is a medical condition in which excess body fat has accumulated to the extent that it may have an adverse effect on health, leading to reduced life expectancy and/or increased health problems...
, heart disease
Heart disease
Heart disease, cardiac disease or cardiopathy is an umbrella term for a variety of diseases affecting the heart. , it is the leading cause of death in the United States, England, Canada and Wales, accounting for 25.4% of the total deaths in the United States.-Types:-Coronary heart disease:Coronary...
, diabetes
Diabetes mellitus
Diabetes mellitus, often simply referred to as diabetes, is a group of metabolic diseases in which a person has high blood sugar, either because the body does not produce enough insulin, or because cells do not respond to the insulin that is produced...
, arthritis
Arthritis
Arthritis is a form of joint disorder that involves inflammation of one or more joints....
, substance abuse
Substance abuse
A substance-related disorder is an umbrella term used to describe several different conditions associated with several different substances .A substance related disorder is a condition in which an individual uses or abuses a...
, anxiety
Anxiety
Anxiety is a psychological and physiological state characterized by somatic, emotional, cognitive, and behavioral components. The root meaning of the word anxiety is 'to vex or trouble'; in either presence or absence of psychological stress, anxiety can create feelings of fear, worry, uneasiness,...
, aging
Ageing
Ageing or aging is the accumulation of changes in a person over time. Ageing in humans refers to a multidimensional process of physical, psychological, and social change. Some dimensions of ageing grow and expand over time, while others decline...
and Parkinson's disease
Parkinson's disease
Parkinson's disease is a degenerative disorder of the central nervous system...
. Knockout mice also offer a biological and scientific context in which drugs and other therapies can be developed and tested.

Millions of knockout mice are used in experiments each year. 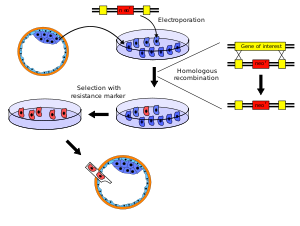 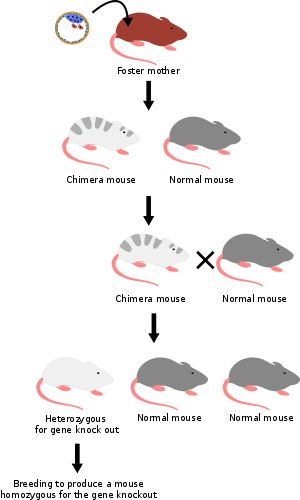 There are several variations to the procedure of producing knockout mice; the following is a typical example.

The National Institutes of Health discusses some important limitations of this technique.


While knockout mouse technology represents a valuable research tool, some important limitations exist. About 15 percent of gene knockouts are developmentally lethal, which means that the genetically altered embryos cannot grow into adult mice. This problem is often overcome through the use of conditional mutations
Mutation
In molecular biology and genetics, mutations are changes in a genomic sequence: the DNA sequence of a cell's genome or the DNA or RNA sequence of a virus. They can be defined as sudden and spontaneous changes in the cell. Mutations are caused by radiation, viruses, transposons and mutagenic...
. The lack of adult mice limits studies to embryonic development
Embryogenesis
Embryogenesis is the process by which the embryo is formed and develops, until it develops into a fetus.Embryogenesis starts with the fertilization of the ovum by sperm. The fertilized ovum is referred to as a zygote...
and often makes it more difficult to determine a gene's function in relation to human health
Health
Health is the level of functional or metabolic efficiency of a living being. In humans, it is the general condition of a person's mind, body and spirit, usually meaning to be free from illness, injury or pain...
. In some instances, the gene may serve a different function in adults than in developing embryos.

Knocking out a gene also may fail to produce an observable change in a mouse or may even produce different characteristics from those observed in humans in which the same gene is inactivated. For example, mutations in the p53 gene are associated with more than half of human cancers and often lead to tumours in a particular set of tissues. However, when the p53 gene is knocked out in mice, the animals develop tumours in a different array of tissues.

There is variability in the whole procedure depending largely on the strain from which the stem cells have been derived. Generally cells derived from strain 129 are used. This specific strain is not suitable for many experiments (e.g., behavioural), so it is very common to backcross
Backcrossing
Backcrossing is a crossing of a hybrid with one of its parents or an individual genetically similar to its parent, in order to achieve offspring with a genetic identity which is closer to that of the parent...
the offspring to other strains. Some genomic loci have been proven very difficult to knock out. Reasons might be the presence of repetitive sequences, extensive DNA methylation
DNA methylation
DNA methylation is a biochemical process that is important for normal development in higher organisms. It involves the addition of a methyl group to the 5 position of the cytosine pyrimidine ring or the number 6 nitrogen of the adenine purine ring...
, or heterochromatin
Heterochromatin
Heterochromatin is a tightly packed form of DNA, which comes in different varieties. These varieties lie on a continuum between the two extremes of constitutive and facultative heterochromatin...
. The confounding presence of neighbouring 129 genes on the knockout segment of genetic material has been dubbed the "flanking-gene effect". Methods and guidelines to deal with this problem have been proposed.

Another limitation is that conventional (i.e. non-conditional) knockout mice develop in the absence of the gene being investigated. At times, loss of activity during development may mask the role of the gene in the adult state, especially if the gene is involved in numerous processes spanning development. Conditional/inducible mutation approaches are then required that first allow the mouse to develop and mature normally prior to ablation of the gene of interest.

Another serious limitation is a lack of evolutive adaptations in knockout model that might occur in wild type animals after they naturally mutate. For instance, erythrocyte-specific coexpression of GLUT1
GLUT1
Glucose transporter 1 , also known as solute carrier family 2, facilitated glucose transporter member 1 is a protein that in humans is encoded by the SLC2A1 gene...
with stomatin constitutes a compensatory mechanism in mammals that are unable to synthesize vitamin C
Vitamin C
Vitamin C or L-ascorbic acid or L-ascorbate is an essential nutrient for humans and certain other animal species. In living organisms ascorbate acts as an antioxidant by protecting the body against oxidative stress...
.