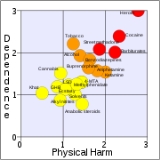 Encyclopedia
A substance-related disorder is an umbrella term
Umbrella term
An umbrella term is a word that provides a superset or grouping of concepts that all fall under a single common category. Umbrella term is also called a hypernym. For example, cryptology is an umbrella term that encompasses cryptography and cryptanalysis, among other fields...
used to describe several different conditions (such as intoxication, harmful use/abuse, dependence, withdrawal, and psychoses or amnesia associated with the use of the substance) associated with several different substances (such as alcohol
Alcohol
In chemistry, an alcohol is an organic compound in which the hydroxy functional group is bound to a carbon atom. In particular, this carbon center should be saturated, having single bonds to three other atoms....
or opiods).

A substance related disorder is a condition in which an individual uses or abuses a substance to the point where it leads to maladaptive behaviours, manifested by at least one symptom that interferes with normal life functioning within a 12 month period. Diagnostic criteria for substance dependence requires at least three of the following during a 12 month period: development of tolerance to the substance, withdrawal symptoms, persistent desire/unsuccessful attempts to stop using the substance, ingestion of larger amounts of substance, declined life functioning, and persistent use of substance. Substance abuse is most prevalent among people 18 to 25 years of age and is also more common in males than females and in urban residents compared to those who live in rural areas. Over 50 percent of individuals with substance abuse issues have another psychiatric disorder, something that is termed Comorbid Psychiatric Diagnosis. Substance abuse can manifest in a variety of ways, differing in terms of the substance abused, the pattern of use and the comorbid illness present. Commonly abused substances include alcohol, stimulants, sedatives/hypnotic drugs, opioids, hallucinogens, "designer drugs", inhalants and marijuana.
Substance-related disorders can be subcategorized into "substance use disorders" (SUD) and "substance-induced disorders" (SID).

Though DSM-IV makes a firm distinction between the two, SIDs often occur in the context of SUDs.

Some people can have strong drug cravings even after they have not used the drug for a long period of time. They call this being "clean". To figure out how the brain triggers these cravings they have done multiple test on mice.

Substance-induced disorders include medical conditions that can be directly attributed to the use of a substance.