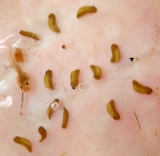 Overview
An embryo is a multicellular
Multicellular organism
Multicellular organisms are organisms that consist of more than one cell, in contrast to single-celled organisms. Most life that can be seen with the the naked eye is multicellular, as are all animals and land plants.-Evolutionary history:Multicellularity has evolved independently dozens of times...
diploid
Ploidy
Ploidy is the number of sets of chromosomes in a biological cell.Human sex cells have one complete set of chromosomes from the male or female parent. Sex cells, also called gametes, combine to produce somatic cells. Somatic cells, therefore, have twice as many chromosomes. The haploid number is...
eukaryote
Eukaryote
A eukaryote is an organism whose cells contain complex structures enclosed within membranes. Eukaryotes may more formally be referred to as the taxon Eukarya or Eukaryota. The defining membrane-bound structure that sets eukaryotic cells apart from prokaryotic cells is the nucleus, or nuclear...
in its earliest stage of development
Developmental biology
Developmental biology is the study of the process by which organisms grow and develop. Modern developmental biology studies the genetic control of cell growth, differentiation and "morphogenesis", which is the process that gives rise to tissues, organs and anatomy.- Related fields of study...
, from the time of first cell division
Cell division
Cell division is the process by which a parent cell divides into two or more daughter cells . Cell division is usually a small segment of a larger cell cycle. This type of cell division in eukaryotes is known as mitosis, and leaves the daughter cell capable of dividing again. The corresponding sort...
until birth
Birth
Birth is the act or process of bearing or bringing forth offspring. The offspring is brought forth from the mother. The time of human birth is defined as the time at which the fetus comes out of the mother's womb into the world...
, hatching
Egg (biology)
An egg is an organic vessel in which an embryo first begins to develop. In most birds, reptiles, insects, molluscs, fish, and monotremes, an egg is the zygote, resulting from fertilization of the ovum, which is expelled from the body and permitted to develop outside the body until the developing...
, or germination
Germination
Germination is the process in which a plant or fungus emerges from a seed or spore, respectively, and begins growth. The most common example of germination is the sprouting of a seedling from a seed of an angiosperm or gymnosperm. However the growth of a sporeling from a spore, for example the...
. In humans, it is called an embryo until about eight weeks after fertilization
Fertilisation
Fertilisation is the fusion of gametes to produce a new organism. In animals, the process involves the fusion of an ovum with a sperm, which eventually leads to the development of an embryo...
(i.e. ten weeks Last Menstrual Period or LMP
Gestational age
Gestational age relates to the age of an embryo or fetus . There is some ambiguity in how it is defined:*In embryology, gestational age is the time elapsed since conception. This interval is also termed fertilisation age....
), and from then it is instead called a fetus
Fetus
A fetus is a developing mammal or other viviparous vertebrate after the embryonic stage and before birth.In humans, the fetal stage of prenatal development starts at the beginning of the 11th week in gestational age, which is the 9th week after fertilization.-Etymology and spelling variations:The...
.

The development of the embryo is called embryogenesis. In organisms that reproduce sexually
Sex
In biology, sex is a process of combining and mixing genetic traits, often resulting in the specialization of organisms into a male or female variety . Sexual reproduction involves combining specialized cells to form offspring that inherit traits from both parents...
, once a sperm
Spermatid
The spermatid is the haploid male gametid that results from division of secondary spermatocytes. As a result of meiosis, each spermatid contains only half of the genetic material present in the original primary spermatocyte....
fertilizes an egg cell
Ovum
An ovum is a haploid female reproductive cell or gamete. Both animals and embryophytes have ova. The term ovule is used for the young ovum of an animal, as well as the plant structure that carries the female gametophyte and egg cell and develops into a seed after fertilization...
, the result is a cell
Cell (biology)
The cell is the basic structural and functional unit of all known living organisms. It is the smallest unit of life that is classified as a living thing, and is often called the building block of life. The Alberts text discusses how the "cellular building blocks" move to shape developing embryos....
called the zygote
Zygote
A zygote , or zygocyte, is the initial cell formed when two gamete cells are joined by means of sexual reproduction. In multicellular organisms, it is the earliest developmental stage of the embryo...
that has half of the DNA
DNA
Deoxyribonucleic acid is a nucleic acid that contains the genetic instructions used in the development and functioning of all known living organisms . The DNA segments that carry this genetic information are called genes, but other DNA sequences have structural purposes, or are involved in...
of each of two parents.

what provides the embryo with energy
More

Is it possible to tell the blood type of 7 week old human embtro? If so, how? Roy
More
x