Encyclopedia
The Kingdom of Saxony lasting between 1806 and 1918, was an independent member of a number of historical confederacies in Napoleonic through post-Napoleonic Germany
Germany
Germany , officially the Federal Republic of Germany , is a federal parliamentary republic in Europe. The country consists of 16 states while the capital and largest city is Berlin. Germany covers an area of 357,021 km2 and has a largely temperate seasonal climate...
. From 1871 it was part of the German Empire
German Empire
The German Empire refers to Germany during the "Second Reich" period from the unification of Germany and proclamation of Wilhelm I as German Emperor on 18 January 1871, to 1918, when it became a federal republic after defeat in World War I and the abdication of the Emperor, Wilhelm II.The German...
. It became a Free state
Free state
Free state may refer to:* Free state , a loosely defined term used by various states at different times and places to describe themselves...
in the era of Weimar Republic
Weimar Republic
The Weimar Republic is the name given by historians to the parliamentary republic established in 1919 in Germany to replace the imperial form of government...
in 1918 after the end of World War I
World War I
World War I , which was predominantly called the World War or the Great War from its occurrence until 1939, and the First World War or World War I thereafter, was a major war centred in Europe that began on 28 July 1914 and lasted until 11 November 1918...
and the abdication of King Frederick Augustus III of Saxony
Frederick Augustus III of Saxony
This article is about King Frederick Augustus III of Saxony. For the elector Frederick Augustus III, see Frederick Augustus I of Saxony.Frederick Augustus III was the last King of Saxony and a member of the House of Wettin.Born in Dresden, Frederick Augustus was the son of King George of Saxony...
. Its capital was the city of Dresden
Dresden
Dresden is the capital city of the Free State of Saxony in Germany. It is situated in a valley on the River Elbe, near the Czech border. The Dresden conurbation is part of the Saxon Triangle metropolitan area....
, and its modern successor state is the Free State of Saxony
Saxony
The Free State of Saxony is a landlocked state of Germany, contingent with Brandenburg, Saxony Anhalt, Thuringia, Bavaria, the Czech Republic and Poland. It is the tenth-largest German state in area, with of Germany's sixteen states....
.


The Napoleonic Era and the German Confederation

Following the defeat of Saxony's ally Prussia
Prussia
Prussia was a German kingdom and historic state originating out of the Duchy of Prussia and the Margraviate of Brandenburg. For centuries, the House of Hohenzollern ruled Prussia, successfully expanding its size by way of an unusually well-organized and effective army. Prussia shaped the history...
at the Battle of Jena in 1806, Saxony joined the Confederation of the Rhine
Confederation of the Rhine
The Confederation of the Rhine was a confederation of client states of the First French Empire. It was formed initially from 16 German states by Napoleon after he defeated Austria's Francis II and Russia's Alexander I in the Battle of Austerlitz. The Treaty of Pressburg, in effect, led to the...
, and remained within the Confederation until its dissolution in 1813 with Napoleon's defeat at the Battle of Leipzig
Battle of Leipzig
The Battle of Leipzig or Battle of the Nations, on 16–19 October 1813, was fought by the coalition armies of Russia, Prussia, Austria and Sweden against the French army of Napoleon. Napoleon's army also contained Polish and Italian troops as well as Germans from the Confederation of the Rhine...
. Following the battle, in which Saxony — virtually alone of the German states — had fought alongside the French, King Frederick Augustus I
Frederick Augustus I of Saxony
Frederick Augustus I was King of Saxony from the House of Wettin. He was also Elector Frederick Augustus III of Saxony and Duke Frederick Augustus I of Warsaw...
was deserted by his troops, taken prisoner by the Prussians and considered to have forfeited his throne by the allies, who put Saxony under Prussian occupation and administration. This was probably more due to the Prussian desire to annex Saxony than to any crime on Frederick Augustus's part, and the fate of Saxony would prove to be one of the main issues at the Congress of Vienna
Congress of Vienna
The Congress of Vienna was a conference of ambassadors of European states chaired by Klemens Wenzel von Metternich, and held in Vienna from September, 1814 to June, 1815. The objective of the Congress was to settle the many issues arising from the French Revolutionary Wars, the Napoleonic Wars,...
. In the end, 40% of the Kingdom, including the historically significant Wittenberg
Wittenberg
Wittenberg, officially Lutherstadt Wittenberg, is a city in Germany in the Bundesland Saxony-Anhalt, on the river Elbe. It has a population of about 50,000....
, home of the Protestant Reformation
Protestant Reformation
The Protestant Reformation was a 16th-century split within Western Christianity initiated by Martin Luther, John Calvin and other early Protestants. The efforts of the self-described "reformers", who objected to the doctrines, rituals and ecclesiastical structure of the Roman Catholic Church, led...
, was annexed by Prussia, but Frederick Augustus was restored to the throne in the remainder of his kingdom, which still included the major cities of Dresden
Dresden
Dresden is the capital city of the Free State of Saxony in Germany. It is situated in a valley on the River Elbe, near the Czech border. The Dresden conurbation is part of the Saxon Triangle metropolitan area....
and Leipzig
Leipzig
Leipzig Leipzig has always been a trade city, situated during the time of the Holy Roman Empire at the intersection of the Via Regia and Via Imperii, two important trade routes. At one time, Leipzig was one of the major European centres of learning and culture in fields such as music and publishing...
. The Kingdom also joined the German Confederation
German Confederation
The German Confederation was the loose association of Central European states created by the Congress of Vienna in 1815 to coordinate the economies of separate German-speaking countries. It acted as a buffer between the powerful states of Austria and Prussia...
, the new organization of the German states to replace the Holy Roman Empire.


The Austro-Prussian War and the German Empire 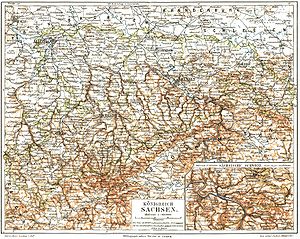 During the 1866 Austro-Prussian War
Austro-Prussian War
The Austro-Prussian War was a war fought in 1866 between the German Confederation under the leadership of the Austrian Empire and its German allies on one side and the Kingdom of Prussia with its German allies and Italy on the...
, Saxony sided with Austria
Austria
Austria , officially the Republic of Austria , is a landlocked country of roughly 8.4 million people in Central Europe. It is bordered by the Czech Republic and Germany to the north, Slovakia and Hungary to the east, Slovenia and Italy to the south, and Switzerland and Liechtenstein to the...
, and the Saxon army was generally seen as the only ally to bring substantial aid to the Austrian cause, having abandoned the defense of Saxony itself to join up with the Austrian army in Bohemia. This effectiveness probably allowed Saxony to escape the fate of other north German states allied with Austria — notably the Kingdom of Hanover
Kingdom of Hanover
The Kingdom of Hanover was established in October 1814 by the Congress of Vienna, with the restoration of George III to his Hanoverian territories after the Napoleonic era. It succeeded the former Electorate of Brunswick-Lüneburg , and joined with 38 other sovereign states in the German...
— which were annexed by Prussia after the war. The Austrians insisted as a point of honour that Saxony must be spared, and the Prussians acquiesced. Saxony nevertheless joined the Prussian-led North German Confederation
North German Confederation
The North German Confederation 1866–71, was a federation of 22 independent states of northern Germany. It was formed by a constitution accepted by the member states in 1867 and controlled military and foreign policy. It included the new Reichstag, a parliament elected by universal manhood...
the next year. With Prussia's victory over France
France
The French Republic , The French Republic , The French Republic , (commonly known as France , is a unitary semi-presidential republic in Western Europe with several overseas territories and islands located on other continents and in the Indian, Pacific, and Atlantic oceans. Metropolitan France...
in the Franco-Prussian War
Franco-Prussian War
The Franco-Prussian War or Franco-German War, often referred to in France as the 1870 War was a conflict between the Second French Empire and the Kingdom of Prussia. Prussia was aided by the North German Confederation, of which it was a member, and the South German states of Baden, Württemberg and...
of 1871, the members of the Confederation were organised by Otto von Bismarck
Otto von Bismarck
Otto Eduard Leopold, Prince of Bismarck, Duke of Lauenburg , simply known as Otto von Bismarck, was a Prussian-German statesman whose actions unified Germany, made it a major player in world affairs, and created a balance of power that kept Europe at peace after 1871.As Minister President of...
into the German Empire
German Empire
The German Empire refers to Germany during the "Second Reich" period from the unification of Germany and proclamation of Wilhelm I as German Emperor on 18 January 1871, to 1918, when it became a federal republic after defeat in World War I and the abdication of the Emperor, Wilhelm II.The German...
, with Wilhelm I as its Emperor. John I
John I of Saxony
John was a King of Saxony and a member of the House of Wettin....
, as Saxony's incumbent king, was subordinate and owed allegiance to the Emperor, although he, like the other German princes, retained some of the prerogatives of a sovereign ruler, including the ability to enter into diplomatic relations with other states.


End of the kingdom