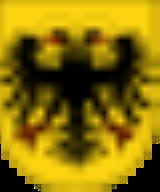 Encyclopedia
The Confederation of the Rhine was a confederation
Confederation
A confederation in modern political terms is a permanent union of political units for common action in relation to other units. Usually created by treaty but often later adopting a common constitution, confederations tend to be established for dealing with critical issues such as defense, foreign...
of client state
Client state
Client state is one of several terms used to describe the economic, political and/or military subordination of one state to a more powerful state in international affairs...
s of the First French Empire
First French Empire
The First French Empire , also known as the Greater French Empire or Napoleonic Empire, was the empire of Napoleon I of France...
. It was formed initially from 16 German states by Napoleon
Napoleon I of France
Napoleon Bonaparte was a French military and political leader during the latter stages of the French Revolution.As Napoleon I, he was Emperor of the French from 1804 to 1815...
after he defeated Austria's Francis II
Francis II, Holy Roman Emperor
Francis II was the last Holy Roman Emperor, ruling from 1792 until 6 August 1806, when he dissolved the Empire after the disastrous defeat of the Third Coalition by Napoleon at the Battle of Austerlitz...
and Russia's Alexander I
Alexander I of Russia
Alexander I of Russia , served as Emperor of Russia from 23 March 1801 to 1 December 1825 and the first Russian King of Poland from 1815 to 1825. He was also the first Russian Grand Duke of Finland and Lithuania....
in the Battle of Austerlitz
Battle of Austerlitz
The Battle of Austerlitz, also known as the Battle of the Three Emperors, was one of Napoleon's greatest victories, where the French Empire effectively crushed the Third Coalition...
. The Treaty of Pressburg, in effect, led to the creation of the Confederation of the Rhine. It lasted from 1806 to 1813.

The members of the confederation were German princes (Fürst
Fürst
Fürst is a German title of nobility, usually translated into English as Prince.The term refers to the head of a principality and is distinguished from the son of a monarch, who is referred to as Prinz...
en) from the Holy Roman Empire
Holy Roman Empire
The Holy Roman Empire was a realm that existed from 962 to 1806 in Central Europe.It was ruled by the Holy Roman Emperor. Its character changed during the Middle Ages and the Early Modern period, when the power of the emperor gradually weakened in favour of the princes...
. They were later joined by 19 others, all together ruling a total of over 15 million subjects providing a significant strategic advantage to the French Empire on its eastern front.

On 12 July 1806, on signing the Treaty of the Confederation of the Rhine , 16 states in present-day Germany formally left the Holy Roman Empire and joined together in a confederation
Confederation
A confederation in modern political terms is a permanent union of political units for common action in relation to other units. Usually created by treaty but often later adopting a common constitution, confederations tend to be established for dealing with critical issues such as defense, foreign...
(the treaty called it the , with a precursor in the League of the Rhine
League of the Rhine
The League of the Rhine was a defensive union of more than 50 German princes and their cities along the River Rhine, formed in 14 August 1658 by Louis XIV of France and negotiated by Cardinal Mazarin , Hugues de Lionne and Johann...
). Napoleon was its "protector." On 6 August, following an ultimatum by Napoleon, Francis II
Francis II, Holy Roman Emperor
Francis II was the last Holy Roman Emperor, ruling from 1792 until 6 August 1806, when he dissolved the Empire after the disastrous defeat of the Third Coalition by Napoleon at the Battle of Austerlitz...
gave up his title of Emperor and declared the Holy Roman Empire
Holy Roman Empire
The Holy Roman Empire was a realm that existed from 962 to 1806 in Central Europe.It was ruled by the Holy Roman Emperor. Its character changed during the Middle Ages and the Early Modern period, when the power of the emperor gradually weakened in favour of the princes...
dissolved. In the years that followed, 23 more German states joined the Confederation; Francis's Habsburg
Habsburg
The House of Habsburg , also found as Hapsburg, and also known as House of Austria is one of the most important royal houses of Europe and is best known for being an origin of all of the formally elected Holy Roman Emperors between 1438 and 1740, as well as rulers of the Austrian Empire and...
dynasty would rule the remainder of the empire as Austria. Only Austria, Prussia
Prussia
Prussia was a German kingdom and historic state originating out of the Duchy of Prussia and the Margraviate of Brandenburg. For centuries, the House of Hohenzollern ruled Prussia, successfully expanding its size by way of an unusually well-organized and effective army. Prussia shaped the history...
, Danish Holstein
Holstein
Holstein is the region between the rivers Elbe and Eider. It is part of Schleswig-Holstein, the northernmost state of Germany....
, and Swedish Pomerania
Pomerania
Pomerania is a historical region on the south shore of the Baltic Sea. Divided between Germany and Poland, it stretches roughly from the Recknitz River near Stralsund in the West, via the Oder River delta near Szczecin, to the mouth of the Vistula River near Gdańsk in the East...
stayed outside, not counting the west bank of the Rhine and Principality of Erfurt
Principality of Erfurt
The Principality of Erfurt existed from 1806 to 1814 and included Erfurt and the surrounding land, including the Grafschaft Blankenhain...
, which were annexed by the French empire.

According to the treaty, the confederation was to be run by common constitutional bodies, but the individual states (in particular the larger ones) wanted unlimited sovereignty
Sovereignty
Sovereignty is the quality of having supreme, independent authority over a geographic area, such as a territory. It can be found in a power to rule and make law that rests on a political fact for which no purely legal explanation can be provided...
.

Instead of a monarchical head of state
Head of State
A head of state is the individual that serves as the chief public representative of a monarchy, republic, federation, commonwealth or other kind of state. His or her role generally includes legitimizing the state and exercising the political powers, functions, and duties granted to the head of...
, as the Holy Roman Emperor had been, its highest office was held by Karl Theodor von Dalberg, the former Arch Chancellor, who now bore the title of a Prince-Primate of the confederation. As such, he was President of the College of Kings and presided over the Diet
Diet (assembly)
In politics, a diet is a formal deliberative assembly. The term is mainly used historically for the Imperial Diet, the general assembly of the Imperial Estates of the Holy Roman Empire, and for the legislative bodies of certain countries.-Etymology:...
of the Confederation, designed to be a parliament-like body though it never actually assembled. The President of the Council of the Princes was the Prince of Nassau-Usingen.

The Confederation was above all a military alliance: the members had to supply France with large numbers of military personnel. In return for their cooperation some state rulers were given higher statuses: Baden, Hesse
Hesse
Hesse or Hessia is both a cultural region of Germany and the name of an individual German state.* The cultural region of Hesse includes both the State of Hesse and the area known as Rhenish Hesse in the neighbouring Rhineland-Palatinate state...
, Cleves, and Berg were made into grand duchies
Grand duchy
A grand duchy, sometimes referred to as a grand dukedom, is a territory whose head of state is a monarch, either a grand duke or grand duchess.Today Luxembourg is the only remaining grand duchy...
, and Württemberg
Württemberg
Württemberg , formerly known as Wirtemberg or Wurtemberg, is an area and a former state in southwestern Germany, including parts of the regions Swabia and Franconia....
and Bavaria
Bavaria
Bavaria, formally the Free State of Bavaria is a state of Germany, located in the southeast of Germany. With an area of , it is the largest state by area, forming almost 20% of the total land area of Germany...
became kingdoms. States were also made larger by incorporating the many smaller "Kleinstaaten
Kleinstaaterei
is a German word, mainly used for the political situation in Germany and neighbouring regions during the Holy Roman Empire and during the German Confederation...
," or small former imperial member states.

After Prussia lost to France in 1806, many medium-sized and small states joined the Rheinbund. It was at its largest in 1808, including four kingdoms, five grand duchies, 13 duchies
Duchy
A duchy is a territory, fief, or domain ruled by a duke or duchess.Some duchies were sovereign in areas that would become unified realms only during the Modern era . In contrast, others were subordinate districts of those kingdoms that unified either partially or completely during the Medieval era...
, seventeen principalities
Principality
A principality is a monarchical feudatory or sovereign state, ruled or reigned over by a monarch with the title of prince or princess, or by a monarch with another title within the generic use of the term prince....
, and the Free Hansa
Hanseatic League
The Hanseatic League was an economic alliance of trading cities and their merchant guilds that dominated trade along the coast of Northern Europe...
towns of Hamburg
Hamburg
-History:The first historic name for the city was, according to Claudius Ptolemy's reports, Treva.But the city takes its modern name, Hamburg, from the first permanent building on the site, a castle whose construction was ordered by the Emperor Charlemagne in AD 808...
, Lübeck, and Bremen
Bremen (state)
The Free Hanseatic City of Bremen is the smallest of Germany's 16 states. A more informal name, but used in some official contexts, is Land Bremen .-Geography:...
.

The Confederation of the Rhine collapsed in 1813, with the aftermath of Napoleon's failed campaign against the Russian Empire
Russian Empire
The Russian Empire was a state that existed from 1721 until the Russian Revolution of 1917. It was the successor to the Tsardom of Russia and the predecessor of the Soviet Union...
. Many of its members changed sides after the Battle of Leipzig
Battle of Leipzig
The Battle of Leipzig or Battle of the Nations, on 16–19 October 1813, was fought by the coalition armies of Russia, Prussia, Austria and Sweden against the French army of Napoleon. Napoleon's army also contained Polish and Italian troops as well as Germans from the Confederation of the Rhine...
, when it became apparent Napoleon would lose the War of the Sixth Coalition
War of the Sixth Coalition
In the War of the Sixth Coalition , a coalition of Austria, Prussia, Russia, the United Kingdom, Portugal, Sweden, Spain and a number of German States finally defeated France and drove Napoleon Bonaparte into exile on Elba. After Napoleon's disastrous invasion of Russia, the continental powers...
.

The following table shows the members of the confederation, with their date of joining, as well as the number of troops provided, listed in parentheses. 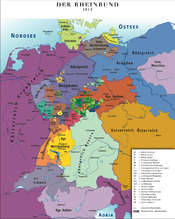 The College of Kings


The College of Princes