Encyclopedia
The kilometre is a unit
Units of measurement
A unit of measurement is a definite magnitude of a physical quantity, defined and adopted by convention and/or by law, that is used as a standard for measurement of the same physical quantity. Any other value of the physical quantity can be expressed as a simple multiple of the unit of...
of length
Length
In geometric measurements, length most commonly refers to the longest dimension of an object.In certain contexts, the term "length" is reserved for a certain dimension of an object along which the length is measured. For example it is possible to cut a length of a wire which is shorter than wire...
in the metric system
Metric system
The metric system is an international decimalised system of measurement. France was first to adopt a metric system, in 1799, and a metric system is now the official system of measurement, used in almost every country in the world...
, equal to one thousand metre
Metre
The metre , symbol m, is the base unit of length in the International System of Units . Originally intended to be one ten-millionth of the distance from the Earth's equator to the North Pole , its definition has been periodically refined to reflect growing knowledge of metrology...
s and is therefore exactly equal to the distance travelled by light
Light
Light or visible light is electromagnetic radiation that is visible to the human eye, and is responsible for the sense of sight. Visible light has wavelength in a range from about 380 nanometres to about 740 nm, with a frequency range of about 405 THz to 790 THz...
in free space in of a second
Second
The second is a unit of measurement of time, and is the International System of Units base unit of time. It may be measured using a clock....
. It is now the measurement unit used officially for expressing distances between geographical places on land in most of the world; notable exceptions are the United States and the United Kingdom where the statute mile is the official unit used.

k (kay) is commonly used as an alternative for the word kilometre in everyday writing and speech. A slang
Slang
Slang is the use of informal words and expressions that are not considered standard in the speaker's language or dialect but are considered more acceptable when used socially. Slang is often to be found in areas of the lexicon that refer to things considered taboo...
term for the kilometre in the U.S. military is klick.

There are two common pronunciations for the word: and
The former pronunciation follows the general pattern in English
English language
English is a West Germanic language that arose in the Anglo-Saxon kingdoms of England and spread into what was to become south-east Scotland under the influence of the Anglian medieval kingdom of Northumbria...
whereby SI units of measurement are pronounced with the stress on the first syllable, and the pronunciation of the actual base unit does not change irresepective of the prefix. It is generally preferred by the British Broadcasting Corporation (BBC) and the Australian Broadcasting Corporation (ABC).

Many scientists and other users, particularly in countries where the Metric System (SI) is not widely used, use the pronunciation with stress on the second syllable. The latter pronunciation follows the stress pattern used for the names of measuring instruments (such as micrometer, barometer, thermometer, tachometer and speedometer). The problem with this reasoning, however, is that the word meter in those usages refers to a measuring device, not a unit of length. The contrast is even more obvious in countries using the English rather than American spelling of the word metre.

When Australia introduced the metric system in 1975, the first pronunciation was declared official by the government's Metric Conversion Board. However, the Australian Prime Minister at the time, Gough Whitlam
Gough Whitlam
Edward Gough Whitlam, AC, QC , known as Gough Whitlam , served as the 21st Prime Minister of Australia. Whitlam led the Australian Labor Party to power at the 1972 election and retained government at the 1974 election, before being dismissed by Governor-General Sir John Kerr at the climax of the...
, insisted that the second pronunciation was the correct one because of the Greek origins of the two parts of the word.


Equivalence to other units of length

Units are given to three significant figures: 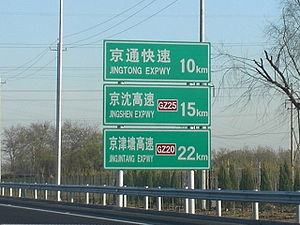 The United Kingdom and the United States are the only two developed countries which continue to use miles on road signs.