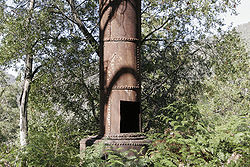 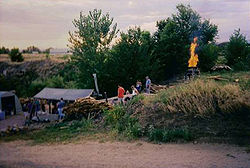 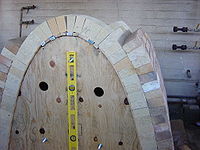 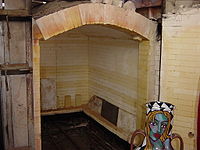 A kiln is a thermally insulated chamber, or oven
Oven
An oven is a thermally insulated chamber used for the heating, baking or drying of a substance. It is most commonly used for cooking. Kilns, and furnaces are special-purpose ovens...
, in which a controlled temperature regime is produced. Uses include the hardening, burning or drying of materials. Kilns are also used for the firing of materials, such as clay
Clay
Clay is a general term including many combinations of one or more clay minerals with traces of metal oxides and organic matter. Geologic clay deposits are mostly composed of phyllosilicate minerals containing variable amounts of water trapped in the mineral structure.- Formation :Clay minerals...
and other raw materials, to form ceramic
Ceramic
A ceramic is an inorganic, nonmetallic solid prepared by the action of heat and subsequent cooling. Ceramic materials may have a crystalline or partly crystalline structure, or may be amorphous...
s (including pottery
Pottery
Pottery is the material from which the potteryware is made, of which major types include earthenware, stoneware and porcelain. The place where such wares are made is also called a pottery . Pottery also refers to the art or craft of the potter or the manufacture of pottery...
, bricks
Brick
A brick is a block of ceramic material used in masonry construction, usually laid using various kinds of mortar. It has been regarded as one of the longest lasting and strongest building materials used throughout history.-History:...
etc.).

Specific other uses include:

Kilns are an essential part of the manufacture of all ceramics, which, by definition, require heat treatment, often at high temperature. During this process, chemical and physical reactions occur which cause the material to be permanently altered. In the case of pottery, clay materials are shaped, dried and then fired in a kiln. The final characteristics are determined by the composition and preparation of the clay body, by the temperature at which it is fired, and by the glaze
Ceramic glaze
Glaze is a layer or coating of a vitreous substance which has been fired to fuse to a ceramic object to color, decorate, strengthen or waterproof it.-Use:...
s that may be used. Although modern kilns often have sophisticated electrical systems to control the firing temperatures, pyrometric device
Pyrometric device
Pyrometric devices gauge heatwork when firing materials inside a kiln. Pyrometric devices do not measure temperature, but can report temperature equivalents...
s have been
used to provide visual indication of the firing regime since around 1000 AD.

Clay consists of fine-grained particles, that are relatively weak and porous. Clay is combined with other minerals to create a workable clay body. Part of the firing process includes sintering
Sintering
Sintering is a method used to create objects from powders. It is based on atomic diffusion. Diffusion occurs in any material above absolute zero, but it occurs much faster at higher temperatures. In most sintering processes, the powdered material is held in a mold and then heated to a temperature...
. This process heats the clay until the particles partially melt and flow together, creating a strong, single mass, composed of a glassy phase interspersed with pores and crystalline material. Through firing, the pores are reduced in size, causing the material to shrink slightly. This crystalline material is a matrix of predominantly silicon
Silicon
Silicon is a chemical element with the symbol Si and atomic number 14. A tetravalent metalloid, it is less reactive than its chemical analog carbon, the nonmetal directly above it in the periodic table, but more reactive than germanium, the metalloid directly below it in the table...
and aluminium
Aluminium
Aluminium or aluminum is a silvery white member of the boron group of chemical elements. It has the symbol Al, and its atomic number is 13. It is not soluble in water under normal circumstances....
oxides, and is very hard and strong, although usually somewhat brittle.

In the broadest terms, there are two types of kiln, both sharing the same basic characteristics of being an insulate
Thermal insulation
Thermal insulation is the reduction of the effects of the various processes of heat transfer between objects in thermal contact or in range of radiative influence. Heat transfer is the transfer of thermal energy between objects of differing temperature...
d box with controlled inner temperature and atmosphere.

In using an intermittent kiln, the ware to be fired is loaded into the kiln. The kiln is sealed, and the internal temperature
Temperature
Temperature is a physical property of matter that quantitatively expresses the common notions of hot and cold. Objects of low temperature are cold, while various degrees of higher temperatures are referred to as warm or hot...
increased according to a schedule. After the firing process is completed, both the kiln and the ware are cooled.

A continuous kiln, sometimes called a tunnel kiln, is a long structure in which only the central portion is directly heated. From the cool entrance, ware is slowly transported through the kiln, and its temperature is increased steadily as it approaches the central, hottest part of the kiln. From there, its transportation continues and the temperature is reduced until it exits the kiln at near room temperature. A continuous kiln is the most energy-efficient, because heat given off during cooling is recycled to pre-heat the incoming ware.

A special type of kiln, common in tableware and tile manufacture, is the roller-hearth kiln, in which ware placed on bats is carried through the kiln on rollers.

Kiln technology is very old. The development of the kiln from a simple earthen trench filled with pots and fuel, pit firing
Pit fired pottery
Pit firing is the oldest known method for the firing of pottery. Examples have been dated as early as 29,000–25,000 BCE. Kilns have since replaced pit firing as the most widespread method of firing pottery, although the technique still finds limited use amongst certain studio potters.Unfired...
, to modern methods happened in stages. One improvement was to build a firing chamber around pots with baffles and a stoking hole, this allowed heat to be conserved and used more efficiently. The use of a chimney stack improves the air flow or draw of the kiln, thus burning the fuel more completely. Early examples of kilns found in Britain
Great Britain
Great Britain or Britain is an island situated to the northwest of Continental Europe. It is the ninth largest island in the world, and the largest European island, as well as the largest of the British Isles...
include those made for the making of roof-tiles during the Roman
Roman Britain
Roman Britain was the part of the island of Great Britain controlled by the Roman Empire from AD 43 until ca. AD 410.The Romans referred to the imperial province as Britannia, which eventually comprised all of the island of Great Britain south of the fluid frontier with Caledonia...
occupation. These kilns were built up the side of a slope, such that a fire could be lit at the bottom and the heat would rise up into the kiln.

With the advent of the industrial age
Industrial Age
Industrial Age may refer to:*Industrialisation*The Industrial Revolution...
, kilns were designed to utilize electricity and more refined fuels, including natural gas
Natural gas
Natural gas is a naturally occurring gas mixture consisting primarily of methane, typically with 0–20% higher hydrocarbons . It is found associated with other hydrocarbon fuel, in coal beds, as methane clathrates, and is an important fuel source and a major feedstock for fertilizers.Most natural...
and propane
Propane
Propane is a three-carbon alkane with the molecular formula , normally a gas, but compressible to a transportable liquid. A by-product of natural gas processing and petroleum refining, it is commonly used as a fuel for engines, oxy-gas torches, barbecues, portable stoves, and residential central...
. The majority of large, industrial pottery kilns now use natural gas, as it is generally clean, efficient and easy to control. Modern kilns can be fitted with computerized controls, allowing for refined adjustments during the firing cycle. A user may choose to control the rate of temperature climb or ramp, hold or soak the temperature at any given point, or control the rate of cooling. Both electric and gas kilns are common for smaller scale production in industry and craft, handmade and sculptural work.

Heat is typically introduced via steam running through fin/tube heat exchangers controlled by on/off pneumatic valves. Less common are proportional pneumatic valves or even various electrical actuators. Humidity is removed via a system of vents, the specific layout of which are usually particular to a given manufacturer. In general, cool dry air is introduced at one end of the kiln while warm moist air is expelled at the other. Hardwood conventional kilns also require the introduction of humidity via either steam spray or cold water misting systems to keep the relative humidity inside the kiln from dropping too low during the drying cycle. Fan directions are typically reversed periodically to ensure even drying of larger kiln charges.

Dehumidification kilns are very similar to conventional kilns in basic construction. Drying times are usually comparable. Heat is primarily supplied by an integral dehumidification unit which also serves to remove humidity. Auxiliary heat is often provided early in the schedule where the heat required may exceed the heat generated by the DH unit.

Newer wood drying technologies have included the use of reduced atmospheric pressure to attempt to speed up the drying process. A variety of vacuum technologies exist, varying primarily in the method heat is introduced into the wood charge. Hot water platten vacuum kilns use aluminum heating plates with the water circulating within as the heat source, and typically operate at significantly reduced absolute pressure. Discontinuous and SSV (super-heated steam) use atmosphere to introduce heat into the kiln charge. Discontinuous technology allows the entire kiln charge to come up to full atmospheric pressure, the air in the chamber is then heated, and finally vacuum is pulled. SSV run at partial atmospheres (typically around 1/3 of full atmospheric pressure) in a hybrid of vacuum and conventional kiln technology (SSV kilns are significantly more popular in Europe where the locally harvested wood is easier to dry versus species found in North America). RF/V (radio frequency + vacuum) kilns use microwave radiation to heat the kiln charge, and typically have the highest operating cost due to the heat of vaporization being provided by electricity rather than local fossil fuel or waste wood sources.

Valid economic studies of different wood drying technologies are based on the total energy, capital, insurance/risk, environmental impacts, labor, maintenance, and product degrade costs for the task of removing water from the wood fiber. These costs (which can be a significant part of the entire plant costs)involve the differential impact of the presence of drying equipment in a specific plant. An example of this is that every piece of equipment (in a lumber manufacturing plant) from the green trimmer to the infeed system at the planer mill is the "drying system". Since thousands of different types of wood products manufacturing plants exist around the globe, and may be integrated (lumber, plywood, paper, etc.) or stand alone (lumber only), the true costs of the drying system can only be determined when comparing the total plant costs and risks with and without drying.

The total (harmful) air emissions produced by wood kilns, including their heat source, can be significant. Typically, the higher the temperature the kiln operates at, the larger amount of emissions are produced (per pound of water removed). This is especially true in the drying of thin veneers and high-temperature drying of softwoods.