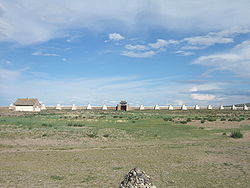 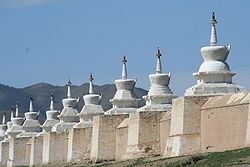 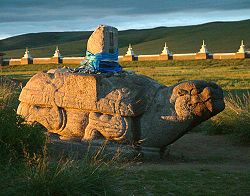 Karakorum was the capital
Capital City
Capital City was a television show produced by Euston Films which focused on the lives of investment bankers in London living and working on the corporate trading floor for the fictional international bank Shane-Longman....
of the Mongol Empire
Mongol Empire
The Mongol Empire , initially named as Greater Mongol State was a great empire during the 13th and 14th centuries...
in the 13th century, and of the Northern Yuan in the 14-15th century. Its ruins lie in the northwestern corner of the Övörkhangai Province of Mongolia
Mongolia
Mongolia is a landlocked country in East and Central Asia. It is bordered by Russia to the north and China to the south, east and west. Although Mongolia does not share a border with Kazakhstan, its western-most point is only from Kazakhstan's eastern tip. Ulan Bator, the capital and largest...
, near today's town of Kharkhorin
Kharkhorin
Kharkhorin is a city and sum center in the Övörkhangai Province in Mongolia. Sum population was 13,828 , 13,964 , 13,496. Kharkhorin city population is 8,977 , city area is 20.5 km2....
, and adjacent to the Erdene Zuu monastery
Erdene Zuu monastery
The Erdene Zuu Monastery is probably the most ancient surviving Buddhist monastery in Mongolia. It is in Övörkhangai Province, near the town of Kharkhorin and adjacent to the ancient city of Karakorum...
. They are part of the upper part of the World Heritage Site
World Heritage Site
A UNESCO World Heritage Site is a place that is listed by the UNESCO as of special cultural or physical significance...
Orkhon Valley Cultural Landscape.

The Orkhon valley was a center of the Xiongnu
Xiongnu
The Xiongnu were ancient nomadic-based people that formed a state or confederation north of the agriculture-based empire of the Han Dynasty. Most of the information on the Xiongnu comes from Chinese sources...
, Göktürk
Göktürks
The Göktürks or Kök Türks, were a nomadic confederation of peoples in medieval Inner Asia. Known in Chinese sources as 突厥 , the Göktürks under the leadership of Bumin Qaghan The Göktürks or Kök Türks, (Old Turkic: Türük or Kök Türük or Türük; Celestial Turks) were a nomadic confederation of...
and Uyghur
Uyghur Empire
The Uyghur Khaganate, or, Uyghur Empire or Uighur Khaganate or Toquz Oghuz Country was a Turkic empire that existed for about a century between the mid 8th and 9th centuries...
empires. To the Göktürks, the nearby Khangai Mountains had been the location of the Ötüken
Ötüken
Ötüken Old Turkic: , Ötüken yïš, , Mount Ötüken, 於都斤山, Linghu Defen, Book of Zhou, Vol. 50, Li Dashi, Li Yanshou, History of Northern Dynasties, Vol. 9, 都尉揵山, Liu Xu etc, Book of Tang, Vol. 199-II, 烏德鞬山/乌德鞬山, Ouyang Xiu etc, New Book of Tang, Vol. 93, 都斤山, Yan Shigu, Kong Yingda etc, Book of Sui,...
, and the Uighur capital Karabalgasun was located close to where later Karakorum would be erected. This area is probably also one of the oldest farming areas in Mongolia.

In 1218/19, Genghis Khan
Genghis Khan
Genghis Khan , born Temujin and occasionally known by his temple name Taizu , was the founder and Great Khan of the Mongol Empire, which became the largest contiguous empire in history after his death....
rallied his troops for the campaign against the Khwarezm Empire in a place called Karakorum, but the actual foundation of a city is usually said to have only occurred in 1220. Until 1235, Karakorum seems to have been little more than a yurt
Yurt
A yurt is a portable, bent wood-framed dwelling structure traditionally used by Turkic nomads in the steppes of Central Asia. The structure comprises a crown or compression wheel usually steam bent, supported by roof ribs which are bent down at the end where they meet the lattice wall...
town; only then, after the defeat of the Jin empire, did Genghis' successor Ögedei
Ögedei Khan
Ögedei Khan, born Ögedei was the third son of Genghis Khan and second Great Khan of the Mongol Empire by succeeding his father...
erect walls around the place and build a fixed palace.

Under Ögedei and his successors, Karakorum became a major site for world politics. Möngke Khan
Möngke Khan
Möngke Khan , born Möngke, , was the fourth Great Khan of the Mongol Empire from July 1, 1251 – August 11, 1259. He was the first Great Khan from the Toluid line, and made significant reforms to improve the administration of the Empire during his reign...
had the palace enlarged, and the great stupa
Stupa
A stupa is a mound-like structure containing Buddhist relics, typically the remains of Buddha, used by Buddhists as a place of worship....
temple completed. They also adorned the famous Silver Tree of Karakorum at the city center.

William of Rubruck
William of Rubruck
William of Rubruck was a Flemish Franciscan missionary and explorer. His account is one of the masterpieces of medieval geographical literature comparable to that of Marco Polo....
, a Flemish Franciscan
Franciscan
Most Franciscans are members of Roman Catholic religious orders founded by Saint Francis of Assisi. Besides Roman Catholic communities, there are also Old Catholic, Anglican, Lutheran, ecumenical and Non-denominational Franciscan communities....
missionary and papal
Pope
The Pope is the Bishop of Rome, a position that makes him the leader of the worldwide Catholic Church . In the Catholic Church, the Pope is regarded as the successor of Saint Peter, the Apostle...
envoy to the Mongols
Mongol Empire
The Mongol Empire , initially named as Greater Mongol State was a great empire during the 13th and 14th centuries...
reached Karakorum in 1254. He has left one of the most detailed, though not always flattering, accounts of the city. He compared it rather unfavourably to the village of Saint-Denis
Saint-Denis
Saint-Denis is a commune in the northern suburbs of Paris, France. It is located from the centre of Paris. Saint-Denis is a sous-préfecture of the Seine-Saint-Denis département, being the seat of the Arrondissement of Saint-Denis....
near Paris, and was of the opinion that the royal abbey there was ten times as important as the Khan's palace. On the other hand, he also described the town as a very cosmopolitan and religiously tolerant place, and the silver tree he described as part of Möngke Khan's palace has become the symbol of Karakorum. He described the walled city as having four gates facing the four directions, two quarters of fixed houses, one for the "Saracen
Saracen
Saracen was a term used by the ancient Romans to refer to a people who lived in desert areas in and around the Roman province of Arabia, and who were distinguished from Arabs. In Europe during the Middle Ages the term was expanded to include Arabs, and then all who professed the religion of Islam...
es" and one for the "Cathai
Cathay
Cathay is the Anglicized version of "Catai" and an alternative name for China in English. It originates from the word Khitan, the name of a nomadic people who founded the Liao Dynasty which ruled much of Northern China from 907 to 1125, and who had a state of their own centered around today's...
", twelve pagan temples, two mosques, as well as a Nestorian
Nestorianism
Nestorianism is a Christological doctrine advanced by Nestorius, Patriarch of Constantinople from 428–431. The doctrine, which was informed by Nestorius's studies under Theodore of Mopsuestia at the School of Antioch, emphasizes the disunion between the human and divine natures of Jesus...
church.

After the collapse of the Yuan dynasty in 1368 Karakorum became the residence of Biligtü Khan
Biligtü Khan
Biligtü Khan, born Ayushiridara , was a ruler of the Northern Yuan Dynasty in Mongolia...
in 1370. In 1388, Ming
Ming Dynasty
The Ming Dynasty, also Empire of the Great Ming, was the ruling dynasty of China from 1368 to 1644, following the collapse of the Mongol-led Yuan Dynasty. The Ming, "one of the greatest eras of orderly government and social stability in human history", was the last dynasty in China ruled by ethnic...
troops took and destroyed the town. Saghang Sechen's Erdeni-yin Tobči claims that a khuriltai in 1415 decided to rebuild it, but no archeological evidence for such a venture has been found yet. However, Karakorum was inhabited at the beginning of the 16th century, when Batu-Möngke Dayan Khan made it a capital once again. In the following years, the town changed hands between Oirads and Chinggisids several times, and was consequently given up permanently.

Erdene Zuu monastery
Erdene Zuu monastery
The Erdene Zuu Monastery is probably the most ancient surviving Buddhist monastery in Mongolia. It is in Övörkhangai Province, near the town of Kharkhorin and adjacent to the ancient city of Karakorum...
stands near the site. Various construction materials were taken from the ruin to build this monastery.

The actual location of Karakorum was long unclear. First hints that Karakorum was located at Erdene Zuu were already known in the 18th century, but until the 20th century there was a dispute whether or not the ruins of Karabalgasun, or Ordu-Baliq, were in fact those of Karakorum. In 1889, the site was conclusively identified as the former Mongol capital by Nikolai Yadrintsev
Nikolai Yadrintsev
Nikolai Mikhailovich Yadrintsev was a Russian public figure, explorer, archaeologist, and turkologist. His discoveries include the Orkhon script, Genghis Khan's capital Karakorum and Ordu-Baliq, the capital of the Uyghur Khaganate. He was also one of the founding fathers of Siberian separatism.-...
, who discovered examples of the Orkhon script
Orkhon script
The Old Turkic script is the alphabet used by the Göktürk and other early Turkic Khanates from at least the 7th century to record the Old Turkic language. It was later used by the Uyghur Empire...
during the same expedition. Yadrintsev's conclusions were confirmed by Wilhelm Radloff.

Findings of the excavations include paved roads, some brick
Brick
A brick is a block of ceramic material used in masonry construction, usually laid using various kinds of mortar. It has been regarded as one of the longest lasting and strongest building materials used throughout history.-History:...
and many adobe
Adobe
Adobe is a natural building material made from sand, clay, water, and some kind of fibrous or organic material , which the builders shape into bricks using frames and dry in the sun. Adobe buildings are similar to cob and mudbrick buildings. Adobe structures are extremely durable, and account for...
buildings, floor heating systems, bed-stoves
Kang bed-stove
The Kang is a traditional long sleeping platform made of bricks or other forms of fired clay and more recently of concrete in some locations. Its interior cavity, leading to a flue, channels the exhaust from a wood or coal stove...
, evidence for processing of copper, gold, silver, iron (including iron wheel nave
Nave
In Romanesque and Gothic Christian abbey, cathedral basilica and church architecture, the nave is the central approach to the high altar, the main body of the church. "Nave" was probably suggested by the keel shape of its vaulting...
s), glass, jewels, bones, and birch bark
Birch bark
Birch bark or birchbark is the bark of several Eurasian and North American birch trees of the genus Betula.The strong and water-resistant cardboard-like bark can be easily cut, bent, and sewn, which made it a valuable building, crafting, and writing material, since pre-historic times...
, as well as ceramics and coins from China and Central Asia. Four kiln
Kiln
A kiln is a thermally insulated chamber, or oven, in which a controlled temperature regime is produced. Uses include the hardening, burning or drying of materials...
s have also been unearthed. 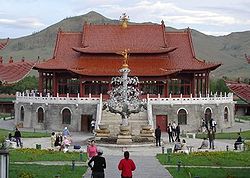 Prime Minister Tsakhiagiin Elbegdorj appointed in 2004 a working group of professionals to develop a project to build a new city at the site of the ancient capital Karakorum. According to him, the new Karakorum was to be designed to be an exemplary city with a vision of becoming the capital of Mongolia. After his resignation and appointment of Miyeegombiin Enkhbold as Prime Minister this project was abandoned.