What all the type of yurts?
More 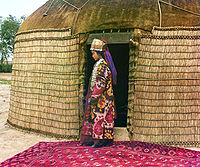 The similar Mongolic
Mongols
Mongols ) are a Central-East Asian ethnic group that lives mainly in the countries of Mongolia, China, and Russia. In China, ethnic Mongols can be found mainly in the central north region of China such as Inner Mongolia...
nomadic structure the ger is often wrongly referred to by westerners as a yurt but differs in that the heavier roof wheel (toono) is supported on posts and the roof ribs are straight rather than bending down at the wall junction. The wall lattice is of a ger is constructed of straight pieces as opposed to the the yurt's curved lattice .

Yurts have been in use at least since the 13th century, and there are indications that the design is much older.

Traditional yurts consist of a circular wooden frame carrying a felt cover. The felt
Felt
Felt is a non-woven cloth that is produced by matting, condensing and pressing woollen fibres. While some types of felt are very soft, some are tough enough to form construction materials. Felt can be of any colour, and made into any shape or size....
is made from the wool of the flocks of sheep that accompany the pastoralists. The timber
Timber
Timber may refer to:* Timber, a term common in the United Kingdom and Australia for wood materials * Timber, Oregon, an unincorporated community in the U.S...
to make the external structure is not to be found on the treeless steppes, and must be obtained by trade in the valleys below.

The frame consists of one or more lattice
Latticework
Latticework is a framework consisting of a criss-crossed pattern of strips of building material, typically wood or metal. The design is created by crossing the strips to form a network...
wall-sections, a door-frame, bent roof poles and a crown. The mongolian ger has one or more columns to support the crown and straight roof poles. The (self-supporting) wood frame is covered with pieces of felt. Depending on availability, the felt is additionally covered with canvas and/or sun-covers. The frame is held together with one or more ropes or ribbons. The structure is kept under compression by the weight of the covers, sometimes supplemented by a heavy weight hung from the center of the roof. They vary with different sizes, and relative weight.

A yurt is designed to be dismantled and the parts carried on camel
Camel
A camel is an even-toed ungulate within the genus Camelus, bearing distinctive fatty deposits known as humps on its back. There are two species of camels: the dromedary or Arabian camel has a single hump, and the bactrian has two humps. Dromedaries are native to the dry desert areas of West Asia,...
s or yak
Yak
The yak, Bos grunniens or Bos mutus, is a long-haired bovine found throughout the Himalayan region of south Central Asia, the Tibetan Plateau and as far north as Mongolia and Russia. In addition to a large domestic population, there is a small, vulnerable wild yak population...
s to be rebuilt on another site.

Examples of common patterns:
Traditional decoration within a yurt is primarily pattern based. These patterns are generally not according to taste, but are derived from sacred ornaments with certain symbolism. Symbols representing strength are among the most common, including the khas (swastika) and four powerful beasts (lion, tiyurt, garuda and dragon), as well as stylized representations of the five elements (fire, water, earth, metal, and wood), considered to be the fundamental, unchanging elements of the cosmos. Such patterns are commonly used in the home with the belief that they will bring strength and offer protection.

Repeating geometric patterns are also widely used. The most widespread geometric pattern is the continuous hammer or walking pattern (alkhan khee). Commonly used as a border decoration it represents unending strength and constant movement. Another common pattern is the ulzii which as a symbol of long life and happiness. The khamar ugalz (nose pattern) and ever ugalz (horn pattern) are derived from the shape of the animal's nose and horns, and are the oldest traditional patterns. All patterns can be found among not only the yurts themselves, but also on embroidery, furniture, books, clothing, doors, and other objects.

The wooden crown of the yurt is itself emblematic in many Central Asian cultures. In old Kazakh
Kazakhstan
Kazakhstan , officially the Republic of Kazakhstan, is a transcontinental country in Central Asia and Eastern Europe. Ranked as the ninth largest country in the world, it is also the world's largest landlocked country; its territory of is greater than Western Europe...
communities, the yurt itself would often be repaired and rebuilt, but the shangrak would remain intact, passed from father to son upon the father's death. A family's length of heritage could be measured by the accumulation of stains on the shangrak from decades of smoke passing through it. A stylized version of the crown is in the center of the coat of arms of Kazakhstan
Coat of arms of Kazakhstan
The emblem of Kazakhstan was adopted on June 4, 1992. The authors of the emblem are Jandarbek Melibekov and Shota Walikhanov. About 245 projects and 67 description designs of the future arms took part in the final competition.-Overview:...
, and forms the main image on the flag of Kyrgyzstan
Flag of Kyrgyzstan
The flag of Kyrgyzstan was adopted on 3 March 1992 by the Supreme Council of Kyrgyzstan. It consists of a red field with a yellow sun in the center having 40 uniformly spaced rays...
.

Today the yurt is seen as a nationalistic symbol among many Central Asian groups, and as such, yurts may be used as cafés (especially those specialising in traditional food), museums (especially relating to national culture), and souvenir shops.


Buddhist symbolism in the Mongolian gers

The design of the Mongolian ger developed from its ancient simple forms to actively integrate with Buddhist culture. The crown—toono adopted the shape of Dharmachakra. The earlier style of toono, nowadays more readily found in Central Asian yurts, is called in Mongolia "sarkhinag toono" while the toono representing Buddhist dharmachakra is called "khorlo
Dharmacakra
The Dharmachakra , lit. "Wheel of Dharma" or "Wheel of Life" is a symbol that has represented dharma, the Buddha's teaching of the path to enlightenment, since the early period of Indian Buddhism. A similar symbol is also in use in Jainism...
" (Tibetan འཀོར་ལོ།) toono. Also the shapes, colours and ornaments of the wooden elements—toono, pillars and poles of the Mongolian yurt are in accord with the artistic style found in Buddhist monasteries of Mongolia. Such yurts are called "uyangiin ger" -- literally meaning "home of lyrics" or "home of melodies".

Enthusiasts in other countries have taken the visual idea of the yurt—a round, semi-permanent tent—and have adapted it to their cultural needs. Although those structures may be copied to some extent from the originals found in Central Asia, they often have some different features in their design that adapt them to different climate and use.

In the United States
United States
The United States of America is a federal constitutional republic comprising fifty states and a federal district...
and Canada
Canada
Canada is a North American country consisting of ten provinces and three territories. Located in the northern part of the continent, it extends from the Atlantic Ocean in the east to the Pacific Ocean in the west, and northward into the Arctic Ocean...
, yurts are made using hi-tech materials. They are highly engineered and built for extreme weather conditions. In addition, erecting one can take days and they are not intended to be moved often. These North American yurts are better named yurt derivations, as they are no longer round felt homes that are easy to mount, dismount and transport. North American yurts and yurt derivations were pioneered by William Coperthwaite
William Coperthwaite
William S. Coperthwaite, a native of Maine, U.S., pioneered yurt building in the United States. For his book "A Handmade Life: In Search of Simplicity", the received the Nautilus book award....
in the 1960s, after he was inspired to build them by an article about Supreme Court Justice William O. Douglas
William O. Douglas
William Orville Douglas was an Associate Justice of the United States Supreme Court. With a term lasting 36 years and 209 days, he is the longest-serving justice in the history of the Supreme Court...
' visit to Mongolia.

In 1978, Oregon-based company Pacific Yurts became the first to manufacture yurts using architectural fabrics and structural engineering, paving the way for yurts to become popular attractions at ski resorts and campgrounds.
In 1993, Oregon became the first state to incorporate yurts into its Parks Department as year round camping facilities. Since then, at least 17 other US States have introduced yurt camping into their own parks departments.

In Europe
Europe
Europe is, by convention, one of the world's seven continents. Comprising the westernmost peninsula of Eurasia, Europe is generally 'divided' from Asia to its east by the watershed divides of the Ural and Caucasus Mountains, the Ural River, the Caspian and Black Seas, and the waterways connecting...
, a closer approximation to the Mongolian and Central Asian yurt is in production in several countries. These tents use local hardwood
Hardwood
Hardwood is wood from angiosperm trees . It may also be used for those trees themselves: these are usually broad-leaved; in temperate and boreal latitudes they are mostly deciduous, but in tropics and subtropics mostly evergreen.Hardwood contrasts with softwood...
, and often are adapted for a wetter climate with steeper roof
Roof
A roof is the covering on the uppermost part of a building. A roof protects the building and its contents from the effects of weather. Structures that require roofs range from a letter box to a cathedral or stadium, dwellings being the most numerous....
profiles and waterproof canvas. In essence they are yurts, but some lack the felt cover that is present in traditional yurt.

Different groups and individuals use yurts for a variety of purposes, from full-time housing to school rooms. In some provincial parks in Canada, and state parks in several US states, permanent yurts are available for camping
Camping
Camping is an outdoor recreational activity. The participants leave urban areas, their home region, or civilization and enjoy nature while spending one or several nights outdoors, usually at a campsite. Camping may involve the use of a tent, caravan, motorhome, cabin, a primitive structure, or no...
.