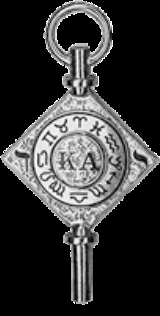 Encyclopedia
The Kappa Alpha Society (ΚΑ), founded in 1825, was the progenitor of the modern fraternity
Fraternities and sororities
Fraternities and sororities are fraternal social organizations for undergraduate students. In Latin, the term refers mainly to such organizations at colleges and universities in the United States, although it is also applied to analogous European groups also known as corporations...
system in North America
North America
North America is a continent wholly within the Northern Hemisphere and almost wholly within the Western Hemisphere. It is also considered a northern subcontinent of the Americas...
. It was the first of the fraternities which would eventually become known as the Union Triad. In addition, Baird's Manual
Baird's Manual of American College Fraternities
Baird's Manual of American College Fraternities is a compendium of fraternities and sororities in the United States and Canada first published in 1879. It covers national and international general , professional, and honor fraternities, including defunct organizations, with an overview of each...
states that KA, unlike other fraternities with claims to the contrary, has maintained a continuous existence since its foundation, making it the oldest undergraduate fraternity that exists today. As of 2011, there are eight active chapters in the United States
United States
The United States of America is a federal constitutional republic comprising fifty states and a federal district...
and Canada
Canada
Canada is a North American country consisting of ten provinces and three territories. Located in the northern part of the continent, it extends from the Atlantic Ocean in the east to the Pacific Ocean in the west, and northward into the Arctic Ocean...
.

According to Baird's Manual
Baird's Manual of American College Fraternities
Baird's Manual of American College Fraternities is a compendium of fraternities and sororities in the United States and Canada first published in 1879. It covers national and international general , professional, and honor fraternities, including defunct organizations, with an overview of each...
, nine undergraduates at Union College
Union College
Union College is a private, non-denominational liberal arts college located in Schenectady, New York, United States. Founded in 1795, it was the first institution of higher learning chartered by the New York State Board of Regents. In the 19th century, it became the "Mother of Fraternities", as...
in Schenectady, New York
Schenectady, New York
Schenectady is a city in Schenectady County, New York, United States, of which it is the county seat. As of the 2010 census, the city had a population of 66,135...
—John Hart Hunter
John Hart Hunter
John Hart Hunter is recognized as the father of the American college fraternity system. He founded the Kappa Alpha Society in 1825 at Union College.http://www.johnharthuntereducationalfoundation.org/-Early life:...
, John McGeoch, Isaac W. Jackson, Thomas Hun, Orlando Meads, James Proudfit, and Joseph Anthony Constant of the class of 1826, and Arthur Burtis and Joseph Law of the Class of 1827—established the Society on November 26, 1825 from an informal group calling itself The Philosophers, which was established by Hunter, Jackson, and Hun in 1823. The organization represents the middle link between secret societies
Secret society
A secret society is a club or organization whose activities and inner functioning are concealed from non-members. The society may or may not attempt to conceal its existence. The term usually excludes covert groups, such as intelligence agencies or guerrilla insurgencies, which hide their...
, literary societies, and Greek-letter organizations like Phi Beta Kappa. In the words of founding member Arthur Burtis:
The first expansion of the Society took place in 1833 at Williams College at the request of fourteen students led by Azariah S. Clark of the class of 1834.

The Kappa Alpha Society, emulated by Sigma Phi
Sigma Phi
The Sigma Phi Society was founded on 4 March 1827, on the campus of Union College as a part of the Union Triad in Schenectady, New York.It is the second oldest Greek fraternal organization in the United States, and the oldest in continuous existence...
(est. 1827) and Delta Phi
Delta Phi
Delta Phi is a fraternity founded in 1827 at Union College in Schenectady, New York. Founded as part of the Union Triad, along with the Kappa Alpha Society and Sigma Phi Society, Delta Phi was the third and last member of the Triad...
(est. 1827), constitute the Union Triad, the pioneers of the North American system of social fraternities.
This organization is not to be confused with the Kappa Alpha Order
Kappa Alpha Order
Kappa Alpha Order is a social fraternity and fraternal order. Kappa Alpha Order has 124 active chapters, 3 provisional chapters, and 2 commissions...
, a completely separate national fraternity.

The Kappa Alpha Society was distinguished by a highly selective process of chapter formation, averaging a steady pace of one a decade for the society's first 150 years..

Chapters are designated with an abbreviation of the institution's Latin
Latin
Latin is an Italic language originally spoken in Latium and Ancient Rome. It, along with most European languages, is a descendant of the ancient Proto-Indo-European language. Although it is considered a dead language, a number of scholars and members of the Christian clergy speak it fluently, and...
name.

The Union and Wesleyan chapters were co-educational (male and female members) in the recent past. The chapter at Wesleyan University, which existed from 1967 to about 1997, was at various times co-educational both as part of The Society and as a local starting in 1974. The Union Chapter was co-ed from 1991 until 2003. There are currently no co-educational chapters.