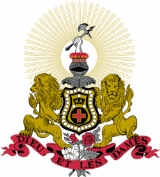 Kappa Alpha Order was originally founded as Phi Kappa Chi on December 21, 1865, at Washington and Lee University
Washington and Lee University
Washington and Lee University is a private liberal arts college in Lexington, Virginia, United States.The classical school from which Washington and Lee descended was established in 1749 as Augusta Academy, about north of its present location. In 1776 it was renamed Liberty Hall in a burst of...
in Lexington, Virginia
Lexington, Virginia
Lexington is an independent city within the confines of Rockbridge County in the Commonwealth of Virginia. The population was 7,042 in 2010. Lexington is about 55 minutes east of the West Virginia border and is about 50 miles north of Roanoke, Virginia. It was first settled in 1777.It is home to...
. James Ward Wood, William Archibald Walsh, and brothers William Nelson Scott and Stanhope McClelland Scott are the founders of the fraternity. Soon after the founding, the local Virginia Beta chapter of Phi Kappa Psi
Phi Kappa Psi
Phi Kappa Psi is an American collegiate social fraternity founded at Jefferson College in Canonsburg, Pennsylvania on February 19, 1852. There are over a hundred chapters and colonies at accredited four year colleges and universities throughout the United States. More than 112,000 men have been...
protested the name "Phi Kappa Chi", due to the similarity of the names, leading Wood to change the name of the fraternity to K.A. by April 1866. The popular Kuklos Adelphon
Kuklos Adelphon
Kuklos Adelphon was a college fraternity widespread throughout the Southern states of the United States in the pre-Civil war period. Its name means Circle of Brothers...
society had gone defunct during the Civil War, and it is suspected that Wood selected the letters K.A. to attract those who were familiar with the old society. Within one year, the order's ritual would be expanded upon and given a new vision by "practical founder", Samuel Zenas Ammen. In the years that followed, the Order spread throughout the Southern United States
Southern United States
The Southern United States—commonly referred to as the American South, Dixie, or simply the South—constitutes a large distinctive area in the southeastern and south-central United States...
, as well as many other states such as California, Arizona and New Mexico, a distinguishing factor that separates it from the smaller, northern-based Kappa Alpha Society
Kappa Alpha Society
The Kappa Alpha Society , founded in 1825, was the progenitor of the modern fraternity system in North America. It was the first of the fraternities which would eventually become known as the Union Triad...
.

KA is one-third of the Lexington Triad, along with Alpha Tau Omega
Alpha Tau Omega
Alpha Tau Omega is a secret American leadership and social fraternity.The Fraternity has more than 250 active and inactive chapters, more than 200,000 initiates, and over 7,000 active undergraduate members. The 200,000th member was initiated in early 2009...
and Sigma Nu
Sigma Nu
Sigma Nu is an undergraduate, college fraternity with chapters in the United States, Canada and the United Kingdom. Sigma Nu was founded in 1869 by three cadets at the Virginia Military Institute in Lexington, Virginia...
. Robert E. Lee
Robert E. Lee
Robert Edward Lee was a career military officer who is best known for having commanded the Confederate Army of Northern Virginia in the American Civil War....
, whose ideals of chivalry and gentlemanly conduct inspired the founders, was designated the "Spiritual Founder" of the Order by John Temple Graves at the 1923 Convention.

The I’s Leadership Institute is an intensive informational and educational retreat set at a Christian conference center. The focus of the Institute is to educate and empower the Number I’s to understand their role and responsibility as the chapter’s highest elected officer. In addition, they are taught to recognize the tools and support systems provided, and to understand the standards and policies of operating an active chapter of Kappa Alpha Order.

The purpose of The Crusade is to provide members with educational opportunities throughout their collegiate experience. The emphasis placed on academic excellence, community service, teambuilding and leadership.

This is done over the member's active membership service, and is broken up into 4 phases (usually coinciding with 4 years of undergraduate classes).
The Crusade's four phases are:

Established in 1982, the Kappa Alpha Order Educational Foundation (KAOEF) is a 501(c)(3) charitable organization. The Foundation provides grants for educational programs of the fraternity, such as the National Leadership Institute and Province Councils, and provides scholarships to deserving graduate and undergraduate students. KAOEF funds these programs with donations contributed by KA alumni. In 2006, KAOEF awarded $93,000 to 73 members to further their studies.

The Kappa Alpha Journal seeks to reflect the Kappa Alpha experience by presenting news of active and alumni chapters, individual members, and the national organization; by addressing current issues facing the Greek system and the Order; by educating and entertaining those interested in the welfare of Kappa Alpha; and by serving as a historical record. The Journal has been published since 1879.

The Loyal Order is an alumni program for alumnus members of Kappa Alpha Order. The National office uses the money from Loyal Order memberships to help defray the cost of distributing the KA Journal, as well as other alumni resources. Benefits of membership include a subscription to The Kappa Alpha Journal and member identification.

The members of Kappa Alpha Order pride themselves on a tradition of chivalry and of the values of the gentleman. This is reminiscent of a romanticized version of the Knights of the Crusades. This all culminates into a modern college fraternal experience. A member of Kappa Alpha Order strives to offer reverence to both God and women, as described in the motto. Further, the idea that "Excellence is our Aim" further emboldens members to always apply themselves to self-improvement, realizing that you should always continue to strive for excellence. Finally, being that the organization is an Order, members typically have an idea of the above values before joining. Kappa Alpha does not intend to change anyone, rather bond together those men who have these similar values so that they may experience brotherhood, and pursue improvement, with one another.

The colors of The Order are traditionally Crimson and Old Gold. The colors represent the blood sacrificed and treasures spent in defense of Christianity.

The crest itself is representative of several things. The hand holding the axe is representative of the continuing power of the Knight Commander and of the Order. The Helmet was, at one time, a symbol used by the Knight Commander of the Order. The badge is featured at the center of the crest, and the lions on either side represent different things each. The lion on the left, looking away, symbolizes "rampant", meaning magnanimous. The lion on the right, looking towards you, symbolizes "regardent", which means cautious or circumspect. The design of the crest, featuring both lions, suggests that a balance is needed in life.

The Kappa Alpha Order motto is "Dieu et les Dames" (God and the Ladies) and is written on the ceiling of the Mississippi Capitol.

The fraternity has been criticized for racial insensitivity and identification with the Confederacy
Confederacy
Confederacy may refer to:A Confederation, an association of sovereign states or communities. Examples include:* Confederate States of America, eleven southern states of the United States of America between 1861 and 1865...
. In November 2002, the Zeta Psi and Kappa Alpha Order chapters at the University of Virginia were suspended and subsequently cleared after the fraternities held a Halloween party where a few guests were photographed wearing blackface
Blackface
Blackface is a form of theatrical makeup used in minstrel shows, and later vaudeville, in which performers create a stereotyped caricature of a black person. The practice gained popularity during the 19th century and contributed to the proliferation of stereotypes such as the "happy-go-lucky darky...
and dressed up as Uncle Sam and Venus and Serena Williams.