Encyclopedia
is a prefecture
Prefectures of Japan
The prefectures of Japan are the country's 47 subnational jurisdictions: one "metropolis" , Tokyo; one "circuit" , Hokkaidō; two urban prefectures , Osaka and Kyoto; and 43 other prefectures . In Japanese, they are commonly referred to as...
of Japan
Japan
Japan is an island nation in East Asia. Located in the Pacific Ocean, it lies to the east of the Sea of Japan, China, North Korea, South Korea and Russia, stretching from the Sea of Okhotsk in the north to the East China Sea and Taiwan in the south...
located on the island of Kyushu
Kyushu
is the third largest island of Japan and most southwesterly of its four main islands. Its alternate ancient names include , , and . The historical regional name is referred to Kyushu and its surrounding islands....
. The capital is the city of Kagoshima
Kagoshima, Kagoshima
is the capital city of Kagoshima Prefecture at the southwestern tip of the Kyūshū island of Japan, and the largest city in the prefecture by some margin...
.

Kagoshima Prefecture is located at the southwest tip of Kyushu and includes a chain of islands stretching further to the southwest for a few hundred kilometers. The most important group is the Amami Islands
Amami Islands
The are a group of islands that is part of the Satsunan Islands, which are then part of the Nansei Islands. The islands are part of Kagoshima Prefecture, in the Kyūshū region of Japan...
.
Surrounded by the Yellow Sea
Yellow Sea
The Yellow Sea is the name given to the northern part of the East China Sea, which is a marginal sea of the Pacific Ocean. It is located between mainland China and the Korean Peninsula. Its name comes from the sand particles from Gobi Desert sand storms that turn the surface of the water golden...
to the west, at least since 1879 by Okinawa Prefecture
Okinawa Prefecture
is one of Japan's southern prefectures. It consists of hundreds of the Ryukyu Islands in a chain over long, which extends southwest from Kyūshū to Taiwan. Okinawa's capital, Naha, is located in the southern part of Okinawa Island...
in the south, Kumamoto Prefecture
Kumamoto Prefecture
is a prefecture of Japan located on Kyushu Island. The capital is the city of Kumamoto.- History :Historically the area was called Higo Province; and the province was renamed Kumamoto during the Meiji Restoration. The creation of prefectures was part of the abolition of the feudal system...
to the north, and Miyazaki Prefecture
Miyazaki Prefecture
is a prefecture of Japan located on the island of Kyushu. The capital is the city of Miyazaki.- History :Historically, after the Meiji Restoration, Hyūga Province was renamed Miyazaki Prefecture....
to the east, it has 2,632 km of coastline (including the 28 islands). It has a bay called Kagoshima Bay
Kagoshima Bay
is a deep inlet on the coast of Japan.Kagoshima Bay is on the south coast of the island of Kyūshū. The port city of Kagoshima and its well-protected harbor lie on the bays western coast....
(Kinkowan), which is sandwiched by two peninsulas, Satsuma
Satsuma Peninsula
thumb|right|240px|Landsat imageThe Satsuma Peninsula is a peninsula which projects south from the southwest part of Kyūshū Island, Japan. To the west lies the East China Sea, while to the east it faces the Osumi Peninsula across Kagoshima Bay...
and Ōsumi
Osumi Peninsula
thumb|right|240px|Satellite image of Osumi PeninsulaThe projects south from the Japanese island of Kyūshū and includes the southernmost point on the island, Cape Sata. Its east coast lies on the Pacific Ocean, while to the west it faces the Satsuma Peninsula across Kagoshima Bay...
. Its position made it a 'gateway' to Japan at various times in history.
While Kyushu has about 13 million people there are less than 2 million in this prefecture.

The prefecture boasts a chain of active and dormant volcano
Volcano
2. Bedrock3. Conduit 4. Base5. Sill6. Dike7. Layers of ash emitted by the volcano8. Flank| 9. Layers of lava emitted by the volcano10. Throat11. Parasitic cone12. Lava flow13. Vent14. Crater15...
es, including the great Sakurajima
Sakurajima
, also romanized as Sakurashima or Sakura-jima, is an active composite volcano and a former island of the same name in Kagoshima Prefecture in Kyūshū, Japan...
, which towers out of the Kagoshima bay opposite Kagoshima
Kagoshima, Kagoshima
is the capital city of Kagoshima Prefecture at the southwestern tip of the Kyūshū island of Japan, and the largest city in the prefecture by some margin...
city. A steady trickle of smoke and ash emerges from the caldera
Caldera
A caldera is a cauldron-like volcanic feature usually formed by the collapse of land following a volcanic eruption, such as the one at Yellowstone National Park in the US. They are sometimes confused with volcanic craters...
, punctuated by louder mini-eruptions on an almost daily basis. On active days in Kagoshima city an umbrella is advisable to ward off the ash. Sakurajima is one of Japan's most active volcanoes. Major eruptions occurred in 1914, when the island mountain spilled enough material to become permanently connected to the mainland, and a lesser eruption in 1960. Volcanic materials in the soil make Sakurajima a source for record daikon
Daikon
Daikon , Raphanus sativus var. longipinnatus, also called White Radish, Japanese radish, Oriental radish, Chinese radish, lo bok and Mooli , is a mild flavoured, very large, white East Asian radish...
radishes, roughly the size of a basketball. Many beaches around the Kagoshima Bay are littered with well-worn pumice stones. A crater lake in the southwestern tip of the prefecture, near the spa town of Ibusuki
Ibusuki, Kagoshima
is a city in Kagoshima, Japan, that was founded on April 1, 1954.Following the incorporation of Kaimon and Yamagawa on January 1, 2006, the city has an estimated population of 45,039 and a population density of 302 persons per km²...
, is home to a rare species of giant eel. 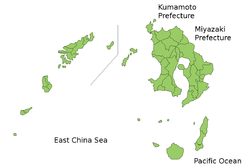 Kagoshima Prefecture corresponds to the ancient Japanese provinces Ōsumi
Osumi Province
was an old province of Japan in the area that is today the eastern part of Kagoshima Prefecture. It was sometimes called . Ōsumi bordered on Hyūga and Satsuma Provinces.Osumi's ancient capital was near modern Kokubu...
and Satsuma
Satsuma Province
was an old province of Japan that is now the western half of Kagoshima Prefecture on the island of Kyūshū. Its abbreviation is Sasshū .During the Sengoku Period, Satsuma was a fief of the Shimazu daimyo, who ruled much of southern Kyūshū from their castle at Kagoshima city.In 1871, with the...
, including the northern part of the Ryukyu Islands
Ryukyu Islands
The , also known as the , is a chain of islands in the western Pacific, on the eastern limit of the East China Sea and to the southwest of the island of Kyushu in Japan. From about 1829 until the mid 20th century, they were alternately called Luchu, Loochoo, or Lewchew, akin to the Mandarin...
. This region played a key role in the Meiji Restoration
Meiji Restoration
The , also known as the Meiji Ishin, Revolution, Reform or Renewal, was a chain of events that restored imperial rule to Japan in 1868...
(Saigo Takamori
Saigo Takamori
was one of the most influential samurai in Japanese history, living during the late Edo Period and early Meiji Era. He has been dubbed the last true samurai.-Early life:...
), and the city of Kagoshima
Kagoshima, Kagoshima
is the capital city of Kagoshima Prefecture at the southwestern tip of the Kyūshū island of Japan, and the largest city in the prefecture by some margin...
was an important naval base during Japan's 20th century wars and the home of admiral Tōgō Heihachirō
Togo Heihachiro
Fleet Admiral Marquis was a Fleet Admiral in the Imperial Japanese Navy and one of Japan's greatest naval heroes. He was termed by Western journalists as "the Nelson of the East".-Early life:...
.
More recent incidents are the sinking of a North Korean spy ship (100 ton class) in 2001 by the coast guard, which was later salvaged and exhibited in Tokyo, and the abduction of an office clerk from a Kagoshima beach in 1978 by agents from the same country. This became known only recently under the Koizumi
Junichiro Koizumi
is a Japanese politician who served as Prime Minister of Japan from 2001 to 2006. He retired from politics when his term in parliament ended.Widely seen as a maverick leader of the Liberal Democratic Party , he became known as an economic reformer, focusing on Japan's government debt and the...
administration.

The prefecture has strong agricultural roots, which are reflected in its most well-known exports: green tea
Green tea
Green tea is made solely from the leaves of Camellia sinensis that have undergone minimal oxidation during processing. Green tea originates from China and has become associated with many cultures throughout Asia. It has recently become more widespread in the West, where black tea is traditionally...
, sweet potato
Sweet potato
The sweet potato is a dicotyledonous plant that belongs to the family Convolvulaceae. Its large, starchy, sweet-tasting, tuberous roots are an important root vegetable. The young leaves and shoots are sometimes eaten as greens. Of the approximately 50 genera and more than 1,000 species of...
, radish
Radish
The radish is an edible root vegetable of the Brassicaceae family that was domesticated in Europe, in pre-Roman times. They are grown and consumed throughout the world. Radishes have numerous varieties, varying in size, color and duration of required cultivation time...
, Pongee rice
Rice
Rice is the seed of the monocot plants Oryza sativa or Oryza glaberrima . As a cereal grain, it is the most important staple food for a large part of the world's human population, especially in East Asia, Southeast Asia, South Asia, the Middle East, and the West Indies...
, Satsuma ware
Satsuma ware
]Satsuma ware , sometimes referred to as "Satsuma porcelain", is a type of Japanese earthenware pottery. It originated in the late 16th century, during the Azuchi-Momoyama period, and is still produced today...
and Berkshire
Berkshire (pig)
Berkshire pigs are a rare breed of pig originating from Berkshire in England.Herds of the breed are still maintained in England by the Rare Breeds Survival Trust at Aldenham Country Park, Hertfordshire, and by the South of England Rare Breeds Centre in Kent. The Berkshire is listed as 'vulnerable',...
pork ("kurobuta"). Kagoshima prefecture's production of bonito flakes is second only to that of Shizuoka
Shizuoka Prefecture
is a prefecture of Japan located in the Chūbu region on Honshu island. The capital is the city of Shizuoka.- History :Shizuoka prefecture was formed from the former Tōtōmi, Suruga and Izu provinces.The area was the home of the first Tokugawa Shogun...
. In addition it produces Japan's largest volume of unagi eels.

The Japan Aerospace Exploration Agency
Japan Aerospace Exploration Agency
The , or JAXA, is Japan's national aerospace agency. Through the merger of three previously independent organizations, JAXA was formed on October 1, 2003, as an Independent Administrative Institution administered by the Ministry of Education, Culture, Sports, Science and Technology and the...
(JAXA) has several facilities within the prefecture, including the country's main launch facility
Tanegashima Space Center
The is one of Japan's space development facilities. It is located on Tanegashima, an island located 115 km south of Kyūshū. It was established in 1969 when the National Space Development Agency of Japan was formed...
on Tanegashima and the Uchinoura Space Center
Uchinoura Space Center
The is a space launch facility close to the Japanese town of Kimotsuki, in Kagoshima Prefecture. Before the establishment of the JAXA space agency in 2003, it was simply called the . All Japan's scientific satellites were launched from Uchinoura prior to the M-V launch vehicles being decommissioned...
.

The following is a list of Kagoshima Prefecture's cities, and its administrative districts with their constituent towns and villages:

In the 2000s, many administrative mergers of cities towns and districts have occurred in Kagoshima Prefecture.

No major baseball or soccer club is based in the prefecture. A number of Kagoshima's ballparks play host to well-known teams: