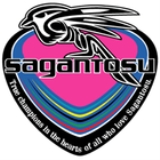 Encyclopedia
is a Japan
Japan
Japan is an island nation in East Asia. Located in the Pacific Ocean, it lies to the east of the Sea of Japan, China, North Korea, South Korea and Russia, stretching from the Sea of Okhotsk in the north to the East China Sea and Taiwan in the south...
ese professional football (soccer)
Football (soccer)
Association football, more commonly known as football or soccer, is a sport played between two teams of eleven players with a spherical ball...
club, currently playing in the J. League Division 2
J. League Division 2
The or is the second division of and is the second-tier professional association football league in Japan. Currently, J. League Division 2 is the second level of the Japanese association football league system. The first tier is represented by J...
. The team is located in Tosu
Tosu, Saga
is a city located in the east part of Saga Prefecture on the island of Kyūshū, Japan.-Overview:Tosu is one of the major transportation hubs of Kyūshū. Its main train station is Tosu Station which connects the Nagasaki Main Line and the Kagoshima Main Line. There is also a junction connecting the...
, Saga Prefecture
Saga Prefecture
is located in the northwest part of the island of Kyūshū, Japan. It touches both the Sea of Japan and the Ariake Sea. The western part of the prefecture is a region famous for producing ceramics and porcelain, particularly the towns of Karatsu, Imari, and Arita...
.

Sagan is a coined word with a couple of meanings behind it. One of its homophone
Homophone
A homophone is a word that is pronounced the same as another word but differs in meaning. The words may be spelled the same, such as rose and rose , or differently, such as carat, caret, and carrot, or to, two, and too. Homophones that are spelled the same are also both homographs and homonyms...
s is in Japanese. This symbolises many small elements uniting to form one formidable object. Also, Sagan Tosu can be interpreted as in the area's dialect. In addition, it is widely believed that the word is meant to be a pun with Italian giants Juventus although the club hasn't confirmed it.

In February 1997, Sagan was established as a new club which virtually takes over Tosu Futures
Tosu Futures
was a Japanese football club that played in the former Japan Football League between 1993 and 1997.-History:PJM Futures was originally founded in Hamamatsu, Shizuoka in 1987 and moved to Tosu, Saga in 1995, changing its name to Tosu Futures. This happened one year after joining the former Japan...
, which became insolvent in the previous month, and admitted to participate Japan Football League
Japan Football League (former)
The former was an association football league that existed from 1992 to 1998. Also known as the JFL, it was the 2nd tier of the Japanese football hierarchy following J...
from 1997 to 1998, as well as J. League Cup
J. League Cup
J. League Cup is a Japanese football competition organized by J. League. It is also known as Yamazaki Nabisco Cup or Nabisco Cup because confectionery/bakery company Yamazaki Nabisco have sponsored the competition since its inception in 1992.It is generally regarded as the Japanese equivalent to...
in 1997 as a preferential measure, although J. League Associate Membership
J. League Associate Membership
J. League Associate Membership  is a status given to Japanese non-league football clubs. The applicant must have an intention to become a professional club and to join the professional league, J. League, governed in the top two levels of the Japanese football pyramid...
status is not awarded to Sagan. In 1999 they were admitted to the new J. League Division 2 (J2), where they remain. Due to Montedio Yamagata
Montedio Yamagata
Montedio Yamagata is a professional association football club based in Yamagata Prefecture in Japan. The club plays in J. League Division 1.Montedio is a coined word combining two Italian words Monte and Dio .-History:...
's promotion to Division 1 (J1) in 2009 season, Sagan became the only club which plays in J2 for entire period since its establishment in 1999.