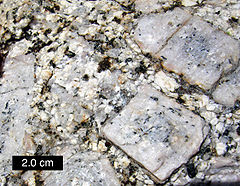 Porphyritic is an adjective used in geology
Geology
Geology is the science comprising the study of solid Earth, the rocks of which it is composed, and the processes by which it evolves. Geology gives insight into the history of the Earth, as it provides the primary evidence for plate tectonics, the evolutionary history of life, and past climates...
, specifically for igneous rock
Igneous rock
Igneous rock is one of the three main rock types, the others being sedimentary and metamorphic rock. Igneous rock is formed through the cooling and solidification of magma or lava...
s, for a rock that has a distinct difference in the size of the crystals, with at least one group of crystals obviously larger than another group. Porphyritic rocks may be aphanite
Aphanite
Aphanite, or aphanitic as an adjective, is a name given to certain igneous rocks which are so fine-grained that their component mineral crystals are not detectable by the unaided eye...
s or extrusive, with large crystals or phenocryst
Phenocryst
thumb|right|300px|[[Granite]]s often have large [[feldspar|feldspatic]] phenocrysts. This granite, from the [[Switzerland|Swiss]] side of the [[Mont Blanc]] massif, has large white [[plagioclase]] phenocrysts, [[triclinic]] [[mineral]]s that give [[trapezium|trapezoid]] shapes when cut through)...
s floating in a fine-grained groundmass of non-visible crystals, as in a porphyritic basalt
Basalt
Basalt is a common extrusive volcanic rock. It is usually grey to black and fine-grained due to rapid cooling of lava at the surface of a planet. It may be porphyritic containing larger crystals in a fine matrix, or vesicular, or frothy scoria. Unweathered basalt is black or grey...
, or phanerite
Phanerite
A phanerite is an igneous rock having the grains of its essential minerals large enough to be seen macroscopically, i.e. are distinguishable with the unaided eye. Synonymous with coarse grained or megascopically crystalline.Cf: aphanitic....
s or intrusive, with individual crystals of the groundmass may be easily distinguished with the eye, but one group of crystals clearly much bigger than the rest, as in a porphyritic granite
Granite
Granite is a common and widely occurring type of intrusive, felsic, igneous rock. Granite usually has a medium- to coarse-grained texture. Occasionally some individual crystals are larger than the groundmass, in which case the texture is known as porphyritic. A granitic rock with a porphyritic...
. Most types of igneous rocks may display some degree of porphyritic texture. One main type of rock that has a porphyritic texture are porphyry
Porphyry (geology)
Porphyry is a variety of igneous rock consisting of large-grained crystals, such as feldspar or quartz, dispersed in a fine-grained feldspathic matrix or groundmass. The larger crystals are called phenocrysts...
, though not all porphyritic rocks are porphyries.

Porphyritic rocks are formed when a column of rising magma
Magma
Magma is a mixture of molten rock, volatiles and solids that is found beneath the surface of the Earth, and is expected to exist on other terrestrial planets. Besides molten rock, magma may also contain suspended crystals and dissolved gas and sometimes also gas bubbles. Magma often collects in...
is cooled in two stages. In the first stage, the magma is cooled slowly deep in the crust, creating the large crystal grains, with a diameter of 2 mm or more. In the final stage, the magma is cooled rapidly at relatively shallow depth or as it erupts from a volcano
Volcano
2. Bedrock3. Conduit 4. Base5. Sill6. Dike7. Layers of ash emitted by the volcano8. Flank| 9. Layers of lava emitted by the volcano10. Throat11. Parasitic cone12. Lava flow13. Vent14. Crater15...
, creating small grains that are usually invisible to the unaided eye.
The source of this article is wikipedia, the free encyclopedia.  The text of this article is licensed under the GFDL.