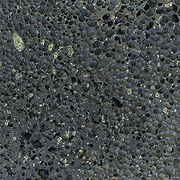 Vesicular texture is a volcanic rock
Rock (geology)
In geology, rock or stone is a naturally occurring solid aggregate of minerals and/or mineraloids.The Earth's outer solid layer, the lithosphere, is made of rock. In general rocks are of three types, namely, igneous, sedimentary, and metamorphic...
texture characterised by a rock being pitted with many cavities (known as vesicles) at its surface and inside. The texture is often found in extrusive aphanitic
Aphanite
Aphanite, or aphanitic as an adjective, is a name given to certain igneous rocks which are so fine-grained that their component mineral crystals are not detectable by the unaided eye...
, or glassy, igneous rock
Igneous rock
Igneous rock is one of the three main rock types, the others being sedimentary and metamorphic rock. Igneous rock is formed through the cooling and solidification of magma or lava...
. These vesicles form during the extrusion of magma to the surface; as the pressure decreases dissolved, magmatic gases are able to come out of solution, forming gas bubbles (the cavities) in the magma. When the magma is extruded as lava and cools the lava solidifies around the gas bubbles, preserving them as vesicles.

A related texture is amygdaloid
Amygdaloid
Amygdaloid, derived from the ancient Greek for almond, can refer to:* the amygdala in the brain.* any almond shape.* a volcanic rock texture in which small volatile cavities or vesicles are filled with secondary minerals....
al in which the volcanic rock, usually basalt
Basalt
Basalt is a common extrusive volcanic rock. It is usually grey to black and fine-grained due to rapid cooling of lava at the surface of a planet. It may be porphyritic containing larger crystals in a fine matrix, or vesicular, or frothy scoria. Unweathered basalt is black or grey...
or andesite
Andesite
Andesite is an extrusive igneous, volcanic rock, of intermediate composition, with aphanitic to porphyritic texture. In a general sense, it is the intermediate type between basalt and dacite. The mineral assemblage is typically dominated by plagioclase plus pyroxene and/or hornblende. Magnetite,...
, has cavities, or vesicles, that are filled with secondary minerals, such as zeolite
Zeolite
Zeolites are microporous, aluminosilicate minerals commonly used as commercial adsorbents. The term zeolite was originally coined in 1756 by Swedish mineralogist Axel Fredrik Cronstedt, who observed that upon rapidly heating the material stilbite, it produced large amounts of steam from water that...
s, calcite
Calcite
Calcite is a carbonate mineral and the most stable polymorph of calcium carbonate . The other polymorphs are the minerals aragonite and vaterite. Aragonite will change to calcite at 380-470°C, and vaterite is even less stable.-Properties:...
, quartz
Quartz
Quartz is the second-most-abundant mineral in the Earth's continental crust, after feldspar. It is made up of a continuous framework of SiO4 silicon–oxygen tetrahedra, with each oxygen being shared between two tetrahedra, giving an overall formula SiO2. There are many different varieties of quartz,...
, or chalcedony
Chalcedony
Chalcedony is a cryptocrystalline form of silica, composed of very fine intergrowths of the minerals quartz and moganite. These are both silica minerals, but they differ in that quartz has a trigonal crystal structure, while moganite is monoclinic...
. Individual cavity fillings are termed amygdules (American usage), or amygdales (British usage). Sometimes these can be sources of semi-precious stones such as agate
Agate
Agate is a microcrystalline variety of silica, chiefly chalcedony, characterised by its fineness of grain and brightness of color. Although agates may be found in various kinds of rock, they are classically associated with volcanic rocks and can be common in certain metamorphic rocks.-Etymology...
.

Rock types that display a vesicular texture include pumice
Pumice
Pumice is a textural term for a volcanic rock that is a solidified frothy lava typically created when super-heated, highly pressurized rock is violently ejected from a volcano. It can be formed when lava and water are mixed. This unusual formation is due to the simultaneous actions of rapid...
and scoria
Scoria
Scoria is a volcanic rock containing many holes or vesicles. It is most generally dark in color , and basaltic or andesitic in composition. Scoria is relatively low in mass as a result of its numerous macroscopic ellipsoidal vesicles, but in contrast to pumice, all scoria has a specific gravity...
.
The source of this article is wikipedia, the free encyclopedia.  The text of this article is licensed under the GFDL.