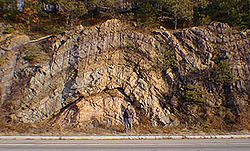 In structural geology
Structural geology
Structural geology is the study of the three-dimensional distribution of rock units with respect to their deformational histories. The primary goal of structural geology is to use measurements of present-day rock geometries to uncover information about the history of deformation in the rocks, and...
, an anticline is a fold
Fold (geology)
The term fold is used in geology when one or a stack of originally flat and planar surfaces, such as sedimentary strata, are bent or curved as a result of permanent deformation. Synsedimentary folds are those due to slumping of sedimentary material before it is lithified. Folds in rocks vary in...
that is convex
Convex set
In Euclidean space, an object is convex if for every pair of points within the object, every point on the straight line segment that joins them is also within the object...
up and has its oldest beds
Stratum
In geology and related fields, a stratum is a layer of sedimentary rock or soil with internally consistent characteristics that distinguish it from other layers...
at its core. The term is not to be confused with antiform, which is a purely descriptive term for any fold that is convex up. Therefore if age relationships (i.e. younging direction) between various strata are unknown, the term antiform must be used.

On a geologic map, anticlines are usually recognized by a sequence of rock
Rock (geology)
In geology, rock or stone is a naturally occurring solid aggregate of minerals and/or mineraloids.The Earth's outer solid layer, the lithosphere, is made of rock. In general rocks are of three types, namely, igneous, sedimentary, and metamorphic...
layers
Stratum
In geology and related fields, a stratum is a layer of sedimentary rock or soil with internally consistent characteristics that distinguish it from other layers...
that are progressively older toward the center of the fold because the uplifted core of the fold is preferentially eroded to a deeper stratigraphic level relative to the topographically lower flanks. The strata dip
Strike and dip
Strike and dip refer to the orientation or attitude of a geologic feature. The strike line of a bed, fault, or other planar feature is a line representing the intersection of that feature with a horizontal plane. On a geologic map, this is represented with a short straight line segment oriented...
away from the center, or crest, of the fold.

If an anticline plunges (i.e., is inclined to the Earth's surface), the surface strata will form Vs that point in the direction of plunge.
Anticlines are typically flanked by syncline
Syncline
In structural geology, a syncline is a fold, with younger layers closer to the center of the structure. A synclinorium is a large syncline with superimposed smaller folds. Synclines are typically a downward fold, termed a synformal syncline In structural geology, a syncline is a fold, with younger...
s although faulting can complicate and obscure the relationship between the two. Folds typically form during crustal deformation as the result of compression that accompanies orogenic
Orogeny
Orogeny refers to forces and events leading to a severe structural deformation of the Earth's crust due to the engagement of tectonic plates. Response to such engagement results in the formation of long tracts of highly deformed rock called orogens or orogenic belts...
mountain building.

Any fold whose form is convex upward is an antiform. Antiforms containing progressively younger rocks from their core outwards are anticlines.

An anticline or antiform has a crest, which is the highest point on a given stratum along the top of the fold. A hinge in an anticline is the locus of maximum curvature or bending in a given stratum in the fold. An axis is an imaginary line connecting the hinges in the different strata in a two-dimensional cross-section through the anticline. Connecting the hinges or points of maximum curvature in the different layers in three dimensions produces an axial plane or axial surface. In a symmetrical anticline, a surface trace of the axial plane coincides with the crest. With an asymmetrical anticline, the surface trace of the axial plane or axis will be offset from the crest toward the steeper flank of the fold. An overturned anticline is an asymmetrical anticline with a flank or limb that has been tilted beyond perpendicular so that the beds in that limb are upside-down.

A structure that plunges in all directions to form a circular or elongate structure is a dome
Dome (geology)
In structural geology, a dome is a deformational feature consisting of symmetrically-dipping anticlines; their general outline on a geologic map is circular or oval...
. Domes are generally formed from one main deformation event, or via diapir
Diapir
A diapir is a type of intrusion in which a more mobile and ductily-deformable material is forced into brittle overlying rocks. Depending on the tectonic environment, diapirs can range from idealized mushroom-shaped Rayleigh-Taylor instability-type structures in regions with low tectonic stress...
ism from underlying magmatic intrusions or movement of upwardly mobile, mechanically ductile material such as rock salt (salt dome) and shale (shale diapir). The famous Richat Structure
Richat Structure
The Richat Structure, also known as the Eye of the Sahara and Guelb er Richat, is a prominent circular feature in the Sahara desert of west – central Mauritania near Ouadane. This structure is a deeply eroded, slightly elliptical, 40-km in diameter, dome...
is thought to be an anticline or dome that has been laid bare by erosion.

An anticline which plunges at both ends is termed a doubly plunging anticline, and may be formed from multiple deformations, or superposition of two sets of folds, or be related to the geometry of the underlying detachment fault and the varying amount of displacement along the surface of that detachment fault. The highest point on a doubly plunging anticline (or any geologic structure for that matter) is called the "culmination."

An elongate dome which developed as the sediments were being deposited is referred to as a pericline.

An anticlinorium is a series of parallel anticlinal folds on a regional-scale anticline. Examples include the Late Jurassic
Jurassic
The Jurassic is a geologic period and system that extends from about Mya to  Mya, that is, from the end of the Triassic to the beginning of the Cretaceous. The Jurassic constitutes the middle period of the Mesozoic era, also known as the age of reptiles. The start of the period is marked by...
to Early Cretaceous
Cretaceous
The Cretaceous , derived from the Latin "creta" , usually abbreviated K for its German translation Kreide , is a geologic period and system from circa to million years ago. In the geologic timescale, the Cretaceous follows the Jurassic period and is followed by the Paleogene period of the...
Purcell Anticlinorium in British Columbia
British Columbia
British Columbia is the westernmost of Canada's provinces and is known for its natural beauty, as reflected in its Latin motto, Splendor sine occasu . Its name was chosen by Queen Victoria in 1858...
and the Blue Ridge anticlinorium of northern Virginia
Virginia
The Commonwealth of Virginia , is a U.S. state on the Atlantic Coast of the Southern United States. Virginia is nicknamed the "Old Dominion" and sometimes the "Mother of Presidents" after the eight U.S. presidents born there...
and Maryland
Maryland
Maryland is a U.S. state located in the Mid Atlantic region of the United States, bordering Virginia, West Virginia, and the District of Columbia to its south and west; Pennsylvania to its north; and Delaware to its east...
in the Appalachians, or the Nittany Valley
Nittany Valley
The Nittany Valley is an eroded anticlinal valley in the central portion of Centre County, Pennsylvania in the United States. It is separated from the Bald Eagle Valley by Bald Eagle Mountain and from Penns Valley by Mount Nittany. The valley is closed to the north by a high plateau that joins...
in central Pennsylvania
Pennsylvania
The Commonwealth of Pennsylvania is a U.S. state that is located in the Northeastern and Mid-Atlantic regions of the United States. The state borders Delaware and Maryland to the south, West Virginia to the southwest, Ohio to the west, New York and Ontario, Canada, to the north, and New Jersey to...
.

Doubly plunging or faulted anticlines, culminations, and structural domes are favored locations for oil
Oil
An oil is any substance that is liquid at ambient temperatures and does not mix with water but may mix with other oils and organic solvents. This general definition includes vegetable oils, volatile essential oils, petrochemical oils, and synthetic oils....
and natural gas
Natural gas
Natural gas is a naturally occurring gas mixture consisting primarily of methane, typically with 0–20% higher hydrocarbons . It is found associated with other hydrocarbon fuel, in coal beds, as methane clathrates, and is an important fuel source and a major feedstock for fertilizers.Most natural...
drilling; the low density of petroleum causes it to buoyantly migrate upward to the highest parts of the fold, until stopped by a low-permeability barrier such as an impermeable stratum or fault zone. Examples of low-permeability seals that contain the hydrocarbons, oil and gas, in the ground include shale, limestone, sandstone, and even salt domes. The actual type of stratum does not matter as long as it has low permeability.

Periclines are important focal points for pooling of hot, metal-laden formational brine
Brine
Brine is water, saturated or nearly saturated with salt .Brine is used to preserve vegetables, fruit, fish, and meat, in a process known as brining . Brine is also commonly used to age Halloumi and Feta cheeses, or for pickling foodstuffs, as a means of preserving them...
s, which can form manto ore deposits
Manto ore deposits
Manto orebodies are stratabound irregular to rod shaped ore occurrences usually horizontal or near horizontal in attitude.Manto deposits are an important source of copper, forming one of the world major copper resources in Chile and southern North America....
, Irish-type lead-zinc deposits and uranium deposits, amongst others.

Culminations in folded strata which are cut by shears and faults are favoured loci for deposition of saddle-reef style lode gold deposits.