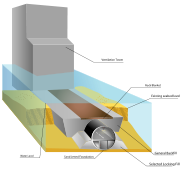 An immersed tube is a kind of underwater tunnel
Tunnel
A tunnel is an underground passageway, completely enclosed except for openings for egress, commonly at each end.A tunnel may be for foot or vehicular road traffic, for rail traffic, or for a canal. Some tunnels are aqueducts to supply water for consumption or for hydroelectric stations or are sewers...
composed of segments, constructed elsewhere and floated to the tunnel site to be sunk into place and then linked together. They are commonly used for road and rail crossings of rivers, estuaries and sea channels/harbours. Immersed tubes are often used in conjunction with other forms of tunnel at their end, such as a cut and cover or bored tunnel, which is usually necessary to continue the tunnel from near the water's edge to the entrance (portal) at the land surface.

The tunnel is made up of separate elements, each prefabricated
Prefabrication
Prefabrication is the practice of assembling components of a structure in a factory or other manufacturing site, and transporting complete assemblies or sub-assemblies to the construction site where the structure is to be located...
in a manageable length, then having the ends sealed with bulkheads so they can be floated. At the same time, the corresponding parts of the path of the tunnel are prepared, with a trench on the bottom of the channel being dredged and graded to fine tolerances to support the elements. The next stage is to place the elements into place, each towed to the final location, in most cases requiring some assistance to remain buoyant. Once in position, additional weight is used to sink the element into the final location, this being a critical stage to ensure each piece is aligned correctly. After being put into place the joint between the new element and the tunnel is dewatered and then made water tight, this process continuing sequentially along the tunnel.

The trench is then backfilled and any necessary protection, such as rock armour, added over the top. The ground beside each end tunnel element will often be reinforced, to permit a tunnel boring machine
Tunnel boring machine
A tunnel boring machine also known as a "mole", is a machine used to excavate tunnels with a circular cross section through a variety of soil and rock strata. They can bore through anything from hard rock to sand. Tunnel diameters can range from a metre to almost 16 metres to date...
to drill the final links to the portals on land. After these stages the tunnel is complete, and the internal fitout can be carried out.

The segments of the tube may be constructed in one of two methods. In the United States, the preferred method has been to construct steel or cast iron tubes which are then lined with concrete. This allows use of conventional shipbuilding techniques, with the segments being launched after assembly in dry docks. In Europe, reinforced concrete box tube construction has been the standard; the sections are cast in a basin which is then flooded to allow their removal.

The main advantage of an immersed tube is that they can be considerably more cost effective than alternative options – i.e. a bored tunnel beneath the water being crossed (if indeed this is possible at all due to other factors such as the geology and seismic activity) or a bridge. Other advantages relative to these alternatives include:

Tubes can be round, oval and rectangular. Larger strait crossings have selected wider rectangular shapes as more cost effective for wider tunnels.

The first tunnel constructed with this method was the Shirley Gut Siphon, a six foot sewer main laid in Boston, Massachusetts in 1893. The first example built to carry traffic was constructed in 1910 to carry the Michigan Central Railroad
Michigan Central Railroad
The Michigan Central Railroad was originally incorporated in 1846 to establish rail service between Detroit, Michigan and St. Joseph, Michigan. The railroad later operated in the states of Michigan, Indiana, and Illinois in the United States, and the province of Ontario in Canada...
under the Detroit River
Detroit River
The Detroit River is a strait in the Great Lakes system. The name comes from the French Rivière du Détroit, which translates literally as "River of the Strait". The Detroit River has served an important role in the history of Detroit and is one of the busiest waterways in the world. The river...
.