Encyclopedia
Conwy is a walled
Defensive wall
A defensive wall is a fortification used to protect a city or settlement from potential aggressors. In ancient to modern times, they were used to enclose settlements...
market town
Market town
Market town or market right is a legal term, originating in the medieval period, for a European settlement that has the right to host markets, distinguishing it from a village and city...
and community
Community (Wales)
A community is a division of land in Wales that forms the lowest-tier of local government in Wales. Welsh communities are analogous to civil parishes in England....
in Conwy County Borough on the north coast of Wales
Wales
Wales is a country that is part of the United Kingdom and the island of Great Britain, bordered by England to its east and the Atlantic Ocean and Irish Sea to its west. It has a population of three million, and a total area of 20,779 km²...
. The town, which faces Deganwy
Deganwy
Deganwy is a village in Conwy County Borough in Wales with a population of 3,700. It is in a more English-speaking region of North Wales, with only 1 in 4 residents speaking Welsh as a first language...
across the River Conwy
River Conwy
The River Conwy is a river in north Wales. From its source to its discharge in Conwy Bay it is a little over long. "Conwy" is sometimes Anglicized as "Conway."...
, formerly lay in Gwynedd
Gwynedd
Gwynedd is a county in north-west Wales, named after the old Kingdom of Gwynedd. Although the second biggest in terms of geographical area, it is also one of the most sparsely populated...
and prior to that in Caernarfonshire
Caernarfonshire
Caernarfonshire , historically spelled as Caernarvonshire or Carnarvonshire in English during its existence, was one of the thirteen historic counties, a vice-county and a former administrative county of Wales....
. Conwy has a population of 14,208 (Including nearby Llandudno Junction
Llandudno Junction
Llandudno Junction , once known as Tremarl, is a small town in the county borough of Conwy, Wales. It is part of the ancient parish of Llangystennin, and it is located south of Llandudno. It adjoins Deganwy and is to the east of the walled town of Conwy, which is on the opposite side of the River...
and Deganwy). (The town itself has a population of around 4,000). and is a popular tourist destination on the north Wales coast. It is a place in Wales where the old Welsh tongue can still be heard in widespread, casual usage. 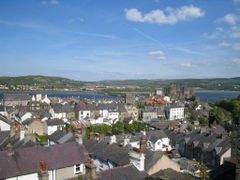 Conwy Castle
Conwy Castle
Conwy Castle is a castle in Conwy, on the north coast of Wales.It was built between 1283 and 1289 during King Edward I's second campaign in North Wales....
and the town walls
Conwy town walls
Conwy's town walls are a medieval defensive structure around the town of Conwy in North Wales. The walls were constructed between 1283 and 1287 after the foundation of Conwy by Edward I, and were designed to form an integrated system of defence alongside Conwy Castle. The walls are 1.3 km ...
were built, on the instruction of Edward I of England
Edward I of England
Edward I , also known as Edward Longshanks and the Hammer of the Scots, was King of England from 1272 to 1307. The first son of Henry III, Edward was involved early in the political intrigues of his father's reign, which included an outright rebellion by the English barons...
, between 1283 and 1289, as part of his conquest of the principality of Wales
Principality of Wales
The Principality of Wales existed between 1216 and 1542, encompassing two-thirds of modern Wales.It was formally founded in 1216 at the Council of Aberdyfi, and later recognised by the 1218 Treaty of Worcester between Llywelyn the Great of Wales and Henry III of England...
. Conwy was the original site of Aberconwy Abbey
Aberconwy Abbey
Aberconwy Abbey was a Cistercian foundation at Conwy, later transferred to Maenan near Llanrwst and in the 13th century was the most important abbey in North Wales....
, founded by Llywelyn the Great
Llywelyn the Great
Llywelyn the Great , full name Llywelyn ab Iorwerth, was a Prince of Gwynedd in north Wales and eventually de facto ruler over most of Wales...
. Edward and his troops took over the abbey site and moved the monks down the Conwy valley to a new site at Maenan. The parish church
Parish church
A parish church , in Christianity, is the church which acts as the religious centre of a parish, the basic administrative unit of episcopal churches....
still retains some parts of the original abbey church in the east and west walls. English settlers were given incentives to move to the walled garrison town, which for decades the Welsh were forbidden from entering.

The Conwy Railway Bridge
Conwy Railway Bridge
Conwy railway bridge carries the North Wales coast railway line across the River Conwy between Llandudno Junction and the town of Conwy. The wrought iron tubular bridge was built by Robert Stephenson to a design by William Fairbairn, and is similar in construction to Stephenson's other famous...
, a Tubular bridge
Tubular bridge
A tubular bridge is a bridge built as a rigid box girder section within which the traffic is carried. Famous examples include the original Britannia Bridge over the Menai Strait and the Conwy railway bridge over the River Conwy, designed and tested by William Fairbairn and built by Robert...
, was built for the Chester and Holyhead Railway by Robert Stephenson
Robert Stephenson
Robert Stephenson FRS was an English civil engineer. He was the only son of George Stephenson, the famed locomotive builder and railway engineer; many of the achievements popularly credited to his father were actually the joint efforts of father and son.-Early life :He was born on the 16th of...
in 1849. The bridge is still in use on the North Wales Coast Line
North Wales Coast Line
The North Wales Coast Line is the railway line from Crewe to Holyhead. Virgin Trains consider their services along it to be a spur of the West Coast Main Line. The first section from Crewe to Chester was built by the Chester and Crewe Railway and absorbed by the Grand Junction Railway shortly...
, along with station
Conwy railway station
Conwy railway station serves the ancient walled town of Conwy and is located on the Crewe to Holyhead North Wales Coast Line. There are through services to Chester via Colwyn Bay, Rhyl, Prestatyn and Flint in one direction and to Bangor & Holyhead in the other. After arrival at Chester, most trains...
, which is located within the town walls. In addition to a modern bridge serving the town, the A55 road
A55 road
The A55, also known as the North Wales Expressway, is a major road in Britain. Its entire length is a dual carriageway primary route, with the exception of the point where it crosses the Britannia Bridge over the Menai Strait. All junctions are grade separated except for two roundabouts — one...
passes under the river by a tunnel which was built between 1986 and 1991. The old mountain road to Penmaenmawr
Penmaenmawr
PenmaenmawrConwyPenmaenmawr is a town in the parish of Dwygyfylchi, in Conwy County Borough, Wales. The population was 3857 in 2001. It is a quarrying town, though the latter is no longer a major employer, on the North Wales coast between Conwy and Llanfairfechan.The town was bypassed by the A55...
runs through the Sychnant Pass
Sychnant Pass
Sychnant Pass in Conwy County Borough, Wales, links Conwy to Penmaenmawr via Dwygyfylchi. Much of the pass is in Snowdonia National Park, and a large area of land within it has been designated a Site of Special Scientific Interest.Before the coming of the railroad to the north Wales coast, the...
, at the foot of Conwy Mountain. 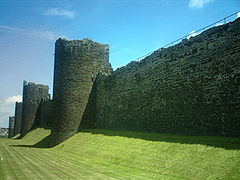 The National Trust also owns Aberconwy House, which is Conwy's only surviving 14th-century merchant's house, one of the first buildings built inside the walls of Conwy. Another fine house open to the public is Plas Mawr
Plas Mawr
right|thumb|250px|Plas MawrPlas Mawr is a historic house in Conwy, north Wales, dating from the 16th century. The house has been restored to its original appearance, with assistance from Cadw, in whose care it is now...
, an Elizabethan
Elizabethan architecture
Elizabethan architecture is the term given to early Renaissance architecture in England, during the reign of Queen Elizabeth I. Historically, the period corresponds to the Cinquecento in Italy, the Early Renaissance in France, and the Plateresque style in Spain...
house built in 1576 by the Wynn family, has been extensively refurbished to its original 16th-century appearance and is now in the care of Cadw
Cadw
-Conservation and Protection:Many of Wales's great castles and other monuments, such as bishop's palaces, historic houses, and ruined abbeys, are now in Cadw's care. Cadw does not own them but is responsible for their upkeep and for making them accessible to the public...
.

The church standing in Conwy, has been marked as the oldest building in Conwy and has stood in the walls of Conwy since the 14th-century. However, the oldest structure is part of the town walls, at the southern end of the east side. Here one wall and the tower of Llewellyn the Great's Llys [court house] have been incorporated into the wall. Built on a rocky outcrop, with an aspidal tower, it is a classic, native, Welsh build and stands out from the rest of the town walls, due to the presence of 4 window openings. It dates from the early 13th century and is the most complete remnant of any of his Llys.

The house named in the Guinness Book of Records as The Smallest House in Great Britain
The Smallest House in Great Britain
The Smallest House in Great Britain, also known as the Quay House, is a tourist attraction on the quay in Conwy, Wales. The 3.05 metre by 1.8 metre structure was used as a residence from the 16th century until 1900; as its name indicates, it is reputed to be Britain's smallest house.The house was...
, with dimensions of 3.05 metres x 1.8 metres, can be found on the quay. It was in continuous occupation from the 16th century (and was even inhabited by a family at one point) until 1900 when the owner a (6 ft fisherman – Robert Jones) was forced to move out on the grounds of hygiene. The rooms were too small for him to stand up in fully. The house is still owned by his descendants today, and you can go on a tour around it for a small charge. 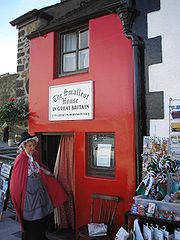 Conwy Morfa
Conwy Morfa
The Conwy Morfa is a piece of originally marshy-sand based spit, north of the western end of the modern A55 entrance to Conwy in Conwy county borough, north-west Wales....
, a marshy spit of land on the west side of the estuary, was probably the location where golf was first played on Welsh soil. It was also the place where Hugh Iorys Hughes
Hugh Iorys Hughes
Hugh Iorys Hughes was a civil engineer and unsung hero of World War II who advised on the design of the Mulberry harbours used in Operation Overlord....
developed, and later built, the floating Mulberry Harbour
Mulberry harbour
A Mulberry harbour was a British type of temporary harbour developed in World War II to offload cargo on the beaches during the Allied invasion of Normandy....
, used in Operation Overlord
Operation Overlord
Operation Overlord was the code name for the Battle of Normandy, the operation that launched the invasion of German-occupied western Europe during World War II by Allied forces. The operation commenced on 6 June 1944 with the Normandy landings...
in World War II. 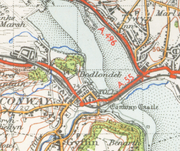