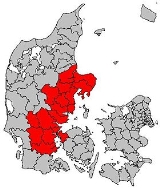 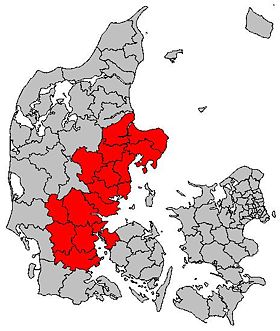 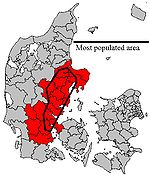 East Jutland metropolitan area is a geographic term for an area in Jutland
Jutland
Jutland , historically also called Cimbria, is the name of the peninsula that juts out in Northern Europe toward the rest of Scandinavia, forming the mainland part of Denmark. It has the North Sea to its west, Kattegat and Skagerrak to its north, the Baltic Sea to its east, and the Danish–German...
, Denmark
Denmark
Denmark is a Scandinavian country in Northern Europe. The countries of Denmark and Greenland, as well as the Faroe Islands, constitute the Kingdom of Denmark . It is the southernmost of the Nordic countries, southwest of Sweden and south of Norway, and bordered to the south by Germany. Denmark...
.

the area stretches from Randers to Kolding, a distance of 129 km so that the region has also been called the "The-100-kilometer-City"

The area is sufficiently small to be flexible. However, at the same time, it has the critical mass to achieve international visibility with Aarhus
Aarhus
Aarhus or Århus is the second-largest city in Denmark. The principal port of Denmark, Aarhus is on the east side of the peninsula of Jutland in the geographical center of Denmark...
as the driving force. Aarhus has been described as an emerging World city, in line with cities like Antwerp, Dresden
Dresden
Dresden is the capital city of the Free State of Saxony in Germany. It is situated in a valley on the River Elbe, near the Czech border. The Dresden conurbation is part of the Saxon Triangle metropolitan area....
, Glasgow
Glasgow
Glasgow is the largest city in Scotland and third most populous in the United Kingdom. The city is situated on the River Clyde in the country's west central lowlands...
, Marseille
Marseille
Marseille , known in antiquity as Massalia , is the second largest city in France, after Paris, with a population of 852,395 within its administrative limits on a land area of . The urban area of Marseille extends beyond the city limits with a population of over 1,420,000 on an area of...
, Saint Petersburg
Saint Petersburg
Saint Petersburg is a city and a federal subject of Russia located on the Neva River at the head of the Gulf of Finland on the Baltic Sea...
and Turin
Turin
Turin is a city and major business and cultural centre in northern Italy, capital of the Piedmont region, located mainly on the left bank of the Po River and surrounded by the Alpine arch. The population of the city proper is 909,193 while the population of the urban area is estimated by Eurostat...
. Aarhus accounts for a large share of growth in the area with an annual growth of more than 4.000 new inhabitant annually, that makes the city the driving force in the area.

East Jutland had previously been the fastest growing region in Denmark in terms of population, about 10,000 per year. However, in recent years has been out-paced by the Copenhagen metropolitan area. East Jutland's current growth rate is on par with the Øresund Region.

The core area around Aarhus
Aarhus
Aarhus or Århus is the second-largest city in Denmark. The principal port of Denmark, Aarhus is on the east side of the peninsula of Jutland in the geographical center of Denmark...
is the most populated area in East Jutland, and that area is much smaller in km² - 6,182 km² and with a population of more than one million.

There are two primary commercial international airports serving the area:

Football
Football (soccer)
Association football, more commonly known as football or soccer, is a sport played between two teams of eleven players with a spherical ball...
is the most popular spectator sport in Denmark and East Jutland metropolitan area has 5 teams contesting the Danish football championship in the Danish Superliga
Danish Superliga
The Danish Superliga is the current Danish football championship tournament, and administered by the Danish Football Association. It is the highest association football league in Denmark and is currently contested by 12 teams each year, with 2 teams to be relegated, which proves to be one of the...
(there are 12 clubs in the league in all):

Handball
Team handball
Handball is a team sport in which two teams of seven players each pass a ball to throw it into the goal of the other team...
is one of the most popular sports in Denmark with 5 out of 12 of the women's best league teams coming from the East Jutland metropolitan area:

East Jutland Metropolitan Area is also home to the current national champions in Ice hockey
Ice hockey
Ice hockey, often referred to as hockey, is a team sport played on ice, in which skaters use wooden or composite sticks to shoot a hard rubber puck into their opponent's net. The game is played between two teams of six players each. Five members of each team skate up and down the ice trying to take...
SønderjyskE.

Industrial hub, technological trendsetter, political frontrunner
Greater Aarhus boasts a unique position in the global wind energy market. It is home to some of the world’s biggest manufacturers of wind turbines. It constitutes the world’s most advanced knowledge center. It has an array of suppliers and subcontractors, covering the entire supply chain. Wind energy enjoys solid political backing on local, regional and national levels. And the wind cluster has a long legacy of cooperation between manufacturers, suppliers, scientific communities and public authorities.

This makes Aarhus an unparalleled knowledge hub and gathering point for the wind industry. As such, it will play a vital role in developing the wind energy systems of the future.

· 14.000 employees in the Danish wind industry work within Central Region Denmark – 11.000 of them within one hour drive from Aarhus.. 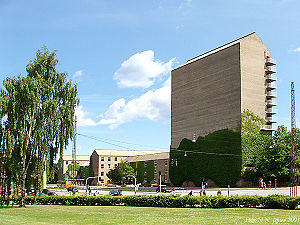 The figures below are for the core area and most populous area in the East Jutland metropolitan area as of 1 October 2011.