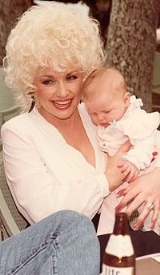 Overview
Dolly Rebecca Parton is an American singer-songwriter, author, multi-instrumentalist, actress and philanthropist, best known for her work in country music
Country music
Country music is a popular American musical style that began in the rural Southern United States in the 1920s. It takes its roots from Western cowboy and folk music...
. Dolly Parton has appeared in movies like 9 to 5, The Best Little Whorehouse in Texas
The Best Little Whorehouse in Texas (film)
The Best Little Whorehouse in Texas is a 1982 film adaptation of the musical of the same name released by Universal Pictures, which was co-written and directed by Colin Higgins...
, Steel Magnolias
Steel Magnolias
Steel Magnolias is a 1989 American comedy-drama film directed by Herbert Ross that stars Sally Field, Shirley MacLaine, Olympia Dukakis, Dolly Parton, Daryl Hannah and Julia Roberts....
and Straight Talk
Straight Talk
Straight Talk is an 1992 American comedy-film distributed by Hollywood Pictures, directed by Barnet Kellman and starring Dolly Parton and James Woods. Parton did not receive star-billing in any other theatrically-released films until the 2012 film Joyful Noise, alongside Queen Latifah...
. She is one of the most successful female country artists of all time, with more #1 hits than any other
and is known as "The Queen of Country Music."
Dolly Parton was born in Sevierville
Sevierville, Tennessee
Sevierville is a city in Sevier County, Tennessee, located in the Southeastern United States. Its population was 11,757 at the 2000 United States Census; in 2004 the estimated population was 14,101. Sevierville is the county seat of Sevier County, Tennessee....
, Tennessee, the fourth of twelve children born to Robert Lee Parton (March 22, 1921 – November 12, 2000) and Avie Lee Parton (née Owens; October 5, 1923 – December 5, 2003).

Hello My name is Deborah and I am a southern gospel song writer. The Lord made a way for me to write and record a c.d. I was hoping I could make anoth...
More

I concerned father of a 10 daughter that is in remission from be cell lithomia cancer for 4 years has been hosiptalised from when she was 4 years old ...
More

I Will Always Love You from the album Jolene

Now Momma's done away with the old black kettle she used to cook in when I was just little And the door ain't sprung on her electric range That little old farm and home we had it ain't there no more and that's too bad Folks are doing away with the simple things...

They didn't understand it and I tried to make them see That one is only poor only if they choose to be Now I know we had no money but I was rich as I could be In my coat of many colors that Momma made for me Made just for me...

Coat of Many Colors from the album of the same name

You can have your choice of men but I could never love again He's the only one for me Jolene I have to have this talk with you My happiness depends on you and whatever You decide to do Jolene...

Jolene from the album of the same name
More
x