Encyclopedia
The Home Office is the United Kingdom government department responsible for immigration control, security, and order. As such it is responsible for the police, UK Border Agency
UK Border Agency
The UK Border Agency is the border control body of the United Kingdom government and part of the Home Office. It was formed on 1 April 2008 by a merger of the Border and Immigration Agency , UKvisas and the Detection functions of HM Revenue and Customs...
, and the Security Service (MI5
MI5
The Security Service, commonly known as MI5 , is the United Kingdom's internal counter-intelligence and security agency and is part of its core intelligence machinery alongside the Secret Intelligence Service focused on foreign threats, Government Communications Headquarters and the Defence...
). It is also in charge of government policy on security-related issues such as drugs, counter-terrorism, and ID cards. It was formerly responsible for the Prison Service
Her Majesty's Prison Service
Her Majesty's Prison Service is a part of the National Offender Management Service of the Government of the United Kingdom tasked with managing most of the prisons within England and Wales...
and Probation Service, but these are now under a newly created Ministry of Justice
Ministry of Justice (United Kingdom)
The Ministry of Justice is a ministerial department of the UK Government headed by the Secretary of State for Justice and Lord Chancellor, who is responsible for improvements to the justice system so that it better serves the public...
.

It continues to be known, especially in official papers and when referred to in Parliament, by its former title, the Home Department.

The Home Office is currently undergoing a major reform programme, following well-publicised issues in early 2006. This is the current organisation of the Home Office, but is likely to change. It is also immensely complex as there are many sub-groups within the Home Office, such as the UK Border Agency
UK Border Agency
The UK Border Agency is the border control body of the United Kingdom government and part of the Home Office. It was formed on 1 April 2008 by a merger of the Border and Immigration Agency , UKvisas and the Detection functions of HM Revenue and Customs...
, who look after inward migration and asylum applications to the United Kingdom. The Home Office is also responsible for the Counter-Terrorism and Intelligence Directorate and the Office for Security and Counter-Terrorism
Office for Security and Counter-Terrorism
The Office for Security and Counter-Terrorism is an executive directorate of the Home Office responsible for leading the work on counter-terrorism in the UK, working closely with the police and security services...
, which manage the UK's response to terrorist incidents through the emergency and security services
Security agency
A security agency is a governmental organization which conducts intelligence activities for the internal security of a nation. They are the domestic cousins of foreign intelligence agencies...
, and develops legislation relating to terrorism
Terrorism
Terrorism is the systematic use of terror, especially as a means of coercion. In the international community, however, terrorism has no universally agreed, legally binding, criminal law definition...
.

The Home Office has the following stated objectives:

The Home Office Ministers are as follows:

Theresa May
Theresa May
Theresa Mary May is a British Conservative politician who is Home Secretary in the Conservative – Liberal Democrat Coalition government. She was elected to Parliament in 1997 as the Member of Parliament for Maidenhead, and served as the Chairman of the Conservative Party, 2003–04...
is also Minister for Women and Equalities and Lynne Featherstone
Lynne Featherstone
Lynne Choona Featherstone , is a British Liberal Democrat politician, and the Member of Parliament for Hornsey and Wood Green....
Parliamentary Under Secretary of State at the Government Equalities Office
Government Equalities Office
The Government Equalities Office is a United Kingdom government department. It was created in October 2007 when the Women and Equality Unit, based within the Department for Communities and Local Government was converted into an independent department.It has lead responsibility for gender equality...
.
Nick Herbert
Nick Herbert
Nicholas Le Quesne "Nick" Herbert is a British Conservative Party politician and the Member of Parliament for Arundel and South Downs...
works between the Home Office and the Ministry of Justice
Ministry of Justice (United Kingdom)
The Ministry of Justice is a ministerial department of the UK Government headed by the Secretary of State for Justice and Lord Chancellor, who is responsible for improvements to the justice system so that it better serves the public...
. 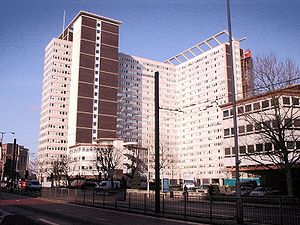 To match the new names, there was a transferring of responsibilities between the two Departments of State. All domestic responsibilities were moved to the Home Office, and all foreign matters became the concern of the Foreign Office.

Most subsequently created domestic departments (excluding, for instance, those dealing with education) have been formed by splitting responsibilities away from the Home Office.

The initial responsibilities were:

Responsibilities were subsequently changed over the years that followed:

The Home Office retains a variety of functions that have not found a home elsewhere, and sit oddly with the main law-and-order focus of the department, such as regulation of British Summer Time
British Summer Time
Western European Summer Time is a summer daylight saving time scheme, 1 hour ahead of Coordinated Universal Time. It is used in the following places:* the Canary Islands* Portugal * Ireland...
.


Permanent Under Secretaries of State of the Home Office 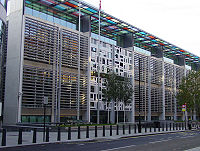 From 1978 to 2004, the Home Office was located at 50 Queen Anne's Gate, a Brutalist
Brutalist architecture
Brutalist architecture is a style of architecture which flourished from the 1950s to the mid 1970s, spawned from the modernist architectural movement.-The term "brutalism":...
office block in Westminster
Westminster
Westminster is an area of central London, within the City of Westminster, England. It lies on the north bank of the River Thames, southwest of the City of London and southwest of Charing Cross...
designed by Sir Basil Spence
Basil Spence
Sir Basil Urwin Spence, OM, OBE, RA was a Scottish architect, most notably associated with Coventry Cathedral in England and the Beehive in New Zealand, but also responsible for numerous other buildings in the Modernist/Brutalist style.-Training:Spence was born in Bombay, India, the son of Urwin...
, close to St. James's Park tube station
St. James's Park tube station
St James's Park is a London Underground station near St James's Park in the City of Westminster. It is served by the District and Circle Lines and is between Victoria and Westminster stations. It is in Travelcard Zone 1....
. Many functions, however, were devolved to offices in other parts of London and the country, notably the headquarters of the Immigration and Nationality Directorate
Immigration and Nationality Directorate
The Immigration and Nationality Directorate was part of the Home Office, a department of the United Kingdom government. The headquarters were in Croydon, South London where it occupied thirteen buildings...
in Croydon
Croydon
Croydon is a town in South London, England, located within the London Borough of Croydon to which it gives its name. It is situated south of Charing Cross...
.

In Spring 2005, the Home Office moved to a new main office designed by Sir Terry Farrell
Terry Farrell (architect)
Sir Terry Farrell, CBE, RIBA, FRSA, FCSD, MRTPI is a British architect.-Life and career:Farrell was born in Sale, Cheshire. As a youth he moved to Newcastle upon Tyne, where he attended St Cuthbert's High School. He graduated with a degree from Newcastle University, followed by a Masters in urban...
at 2 Marsham Street
2 Marsham Street
2 Marsham Street London has been the headquarters of the Home Office, a department of the British Government, since March 2005. Before this date the Home Office was located at 50 Queen Anne's Gate.-History:...
, Westminster, SW1P 4DF, on the site of the demolished Marsham Towers
Marsham Towers
The Marsham Towers were three towers at the corner of Marsham Street and Great Peter Street in Westminster, London. They served as the headquarters of the Department of the Environment.-Redevelopment:The redevelopment of the site was long planned...
building of the Department of the Environment
Secretary of State for the Environment
The Secretary of State for the Environment was a UK cabinet position, responsible for the Department of the Environment . This was created by Edward Heath as a combination of the Ministry of Housing and Local Government, the Ministry of Transport and the Ministry of Public Building and Works on 15...
. The contract to build the new headquarters was a public-private partnership
Public-private partnership
Public–private partnership describes a government service or private business venture which is funded and operated through a partnership of government and one or more private sector companies...
deal intended to last for around 29 years.

Most front-line law and order policy areas, such as policing, are devolved in Scotland and Northern Ireland but the following reserved and excepted matters are handled by Westminster.

The Scottish Government Justice and Communities Directorates are responsible for policing and community safety policy.

The following matters were not transferred at the devolution of policing and justice on 12 April 2010 and remain reserved:

The Home Office's main counterparts in Northern Ireland are: