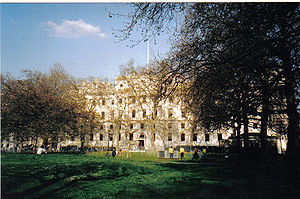 HM Treasury, in full Her Majesty's Treasury, informally The Treasury, is the United Kingdom government department responsible for developing and executing the British government's public finance
Public finance
Public finance is the revenue and expenditure of public authoritiesThe purview of public finance is considered to be threefold: governmental effects on efficient allocation of resources, distribution of income, and macroeconomic stabilization.-Overview:The proper role of government provides a...
policy and economic policy
Economic policy
Economic policy refers to the actions that governments take in the economic field. It covers the systems for setting interest rates and government budget as well as the labor market, national ownership, and many other areas of government interventions into the economy.Such policies are often...
. The Treasury maintains the Combined Online Information System
Combined Online Information System
The Combined Online Information System is a database containing HM Treasury's detailed analysis of departmental spending under thousands of category headings. The database contains around 24 million lines of data...
(COINS) containing a detailed analysis of departmental spending under thousands of category headings.

The Treasury of the United Kingdom traces its origins to the Treasury of the Kingdom of England
Kingdom of England
The Kingdom of England was, from 927 to 1707, a sovereign state to the northwest of continental Europe. At its height, the Kingdom of England spanned the southern two-thirds of the island of Great Britain and several smaller outlying islands; what today comprises the legal jurisdiction of England...
, which had come into existence by 1126, in the reign of Henry I
Henry I of England
Henry I was the fourth son of William I of England. He succeeded his elder brother William II as King of England in 1100 and defeated his eldest brother, Robert Curthose, to become Duke of Normandy in 1106...
. The Treasury emerged out of the Royal Household
Royal Household
A Royal Household in ancient and medieval monarchies formed the basis for the general government of the country as well as providing for the needs of the sovereign and his relations....
, and served as the location where the king kept his treasures. The head of the Treasury was called the Lord Treasurer. Starting in Tudor
Tudor dynasty
The Tudor dynasty or House of Tudor was a European royal house of Welsh origin that ruled the Kingdom of England and its realms, including the Lordship of Ireland, later the Kingdom of Ireland, from 1485 until 1603. Its first monarch was Henry Tudor, a descendant through his mother of a legitimised...
times, the Lord Treasurer became one of the chief officers of state, and competed with the Lord Chancellor
Lord Chancellor
The Lord High Chancellor of Great Britain, or Lord Chancellor, is a senior and important functionary in the government of the United Kingdom. He is the second highest ranking of the Great Officers of State, ranking only after the Lord High Steward. The Lord Chancellor is appointed by the Sovereign...
for the principal place. In 1667 Charles II of England
Charles II of England
Charles II was monarch of the three kingdoms of England, Scotland, and Ireland.Charles II's father, King Charles I, was executed at Whitehall on 30 January 1649, at the climax of the English Civil War...
was responsible for appointing George Downing
Sir George Downing, 1st Baronet
Sir George Downing, 1st Baronet was an Anglo-Irish soldier, statesman, and diplomat. Downing Street in London is named after him. As Treasury Secretary he is credited with instituting major reforms in public finance. His influence was substantial on the passage and substance of the mercantilist...
, the builder of Downing Street
Downing Street
Downing Street in London, England has for over two hundred years housed the official residences of two of the most senior British cabinet ministers: the First Lord of the Treasury, an office now synonymous with that of Prime Minister of the United Kingdom, and the Second Lord of the Treasury, an...
, to radically reform the Treasury and the collection of taxes.

Banknotes in the UK are normally issued
Bank of England note issues
The Bank of England, which is now the Central Bank of the United Kingdom, has issued banknotes since 1694. Since 1970, its new series of notes have featured portraits of British historical figures. Of the eight banks authorised to issue banknotes in the UK, only the Bank of England can issue...
by the Bank of England
Bank of England
The Bank of England is the central bank of the United Kingdom and the model on which most modern central banks have been based. Established in 1694, it is the second oldest central bank in the world...
and a number of commercial banks (see Banknotes of the pound sterling). At the start of the First World War, the Currency and Bank Notes Act 1914 was passed which gave the Treasury temporary powers for issuing banknotes to the value of £1 and 10/- (ten shillings) in the UK. Treasury notes had full legal tender status and were not convertible for gold through the Bank of England, replacing the gold coin in circulation to prevent a run on sterling and to enable raw material purchases for armament production. These notes featured an image of King George V
George V of the United Kingdom
George V was King of the United Kingdom and the British Dominions, and Emperor of India, from 6 May 1910 through the First World War until his death in 1936....
- Bank of England notes did not begin to display an image of the monarch until 1960. They replaced coins in circulation, were produced by the Treasury, not the Bank of England. The wording on each note was UNITED KINGDOM OF GREAT BRITAIN AND IRELAND — Currency notes are Legal Tender for the payment of any amount — Issued by the Lords Commissioners of His Majesty's Treasury under the Authority of Act of Parliament (4 & 5 Geo. V c.14).

The promise (never adhered to) was their removal from circulation after the war had finished and the return to the circulation of gold as money.

Some of the Government Whips
Whip (politics)
A whip is an official in a political party whose primary purpose is to ensure party discipline in a legislature. Whips are a party's "enforcers", who typically offer inducements and threaten punishments for party members to ensure that they vote according to the official party policy...
are also associated in name with the Treasury: the Chief Whip
Chief Whip
The Chief Whip is a political office in some legislatures assigned to an elected member whose task is to administer the whipping system that ensures that members of the party attend and vote as the party leadership desires.-The Whips Office:...
is nominally Parliamentary Secretary to the Treasury and traditionally had an office in 12 Downing Street
Downing Street
Downing Street in London, England has for over two hundred years housed the official residences of two of the most senior British cabinet ministers: the First Lord of the Treasury, an office now synonymous with that of Prime Minister of the United Kingdom, and the Second Lord of the Treasury, an...
. Some of the other Whips are nominally a Lord Commissioner of HM Treasury though these are all members of the House of Commons
British House of Commons
The House of Commons is the lower house of the Parliament of the United Kingdom, which also comprises the Sovereign and the House of Lords . Both Commons and Lords meet in the Palace of Westminster. The Commons is a democratically elected body, consisting of 650 members , who are known as Members...
. This led to the Government frontbench in the Commons being known as the Treasury Bench. However, since the Whips no longer have any effective ministerial role in the Treasury, they are usually not listed as Treasury ministers.

The Treasury Ministers are as follows:

The position of Permanent Secretary
Permanent Secretary
The Permanent secretary, in most departments officially titled the permanent under-secretary of state , is the most senior civil servant of a British Government ministry, charged with running the department on a day-to-day basis...
of HM Treasury is generally regarded as the second most influential in the British Civil Service
British Civil Service
Her Majesty's Home Civil Service, also known as the Home Civil Service, is the permanent bureaucracy of Crown employees that supports Her Majesty's Government - the government of the United Kingdom, composed of a Cabinet of ministers chosen by the prime minister, as well as the devolved...
; the last two incumbents have gone on to be Cabinet Secretary
Cabinet Secretary
A Cabinet Secretary is almost always a senior official who provides services and advice to a Cabinet of Ministers. In many countries, the position can have considerably wider functions and powers, including general responsibility for the entire civil service...
, the only post out-ranking it.


The Second Permanent Secretary is Tom Scholar, the managing director of the International and Finance division. With effect from June 2007, the post of Head of the Government Economic Service
Government Economic Service
The Government Economic Service was founded in 1964 by Sir Alec Cairncross. It is a professional grouping of public sector economists who work across some 40 government departments and agencies, the Bank of England is also a Corporate Member of the GES. The GES recruits economists on behalf of the...
(GES) is held jointly by the Managing Director of Macroeconomic and Fiscal Policy in HM Treasury, Dave Ramsden
Dave Ramsden
David Edward John Ramsden CBE is a senior British civil servant, serving as the Managing Director of Macroeconomic and Fiscal Policy in HM Treasury...
, and Vicky Pryce
Vicky Pryce
Vicky Pryce CB is an economist, and former Joint Head of the United Kingdom's Government Economic Service.-Early life:She was born in Athens, the daughter of Nicolas and Voula Courmouzis...
, Chief Economist in the Department for Business, Innovation and Skills
Department for Business, Innovation and Skills
The Department for Business, Innovation and Skills is a ministerial department of the United Kingdom Government created on 5 June 2009 by the merger of the Department for Innovation, Universities and Skills and the Department for Business, Enterprise and Regulatory Reform .-Ministers:The BIS...
. The previous Head of the GES was Sir Nick Stern
Nicholas Stern
Nicholas Herbert Stern, Baron Stern of Brentford, Kt, FBA is a British economist and academic. He is IG Patel Professor of Economics and Government, Chair of the Grantham Research Institute on Climate Change and the Environment at the London School of Economics , and 2010 Professor of Collège de...
. Management support for GES members is provided by the Economists in Government team, which is located in HM Treasury's building.


Other bodies reporting to Treasury Ministers

The Treasury Main Building at 1 Horse Guards Road, often referred to as the Government Offices Great George Street ('GOGGS'), was designed by John Brydon following a competition. Construction took place in two phases: the West end was completed in 1908 and the East end was completed in 1917. It was originally built as offices for Board of Education
Board of education
A board of education or a school board or school committee is the title of the board of directors or board of trustees of a school, local school district or higher administrative level....
, the Local Government Board
Local Government Board
The Local Government Board was a British Government supervisory body overseeing local administration in England and Wales from 1871 to 1919.The LGB was created by the Local Government Board Act 1871 The Local Government Board (LGB) was a British Government supervisory body overseeing local...
and the local Ministry of Works Office: HM Treasury only moved in the building in 1940. A major refurbishment of the building was completed under a PFI
Private Finance Initiative
The private finance initiative is a way of creating "public–private partnerships" by funding public infrastructure projects with private capital...
contract by Bovis Lend Lease
Bovis Lend Lease
Lend Lease Project Management & Construction is the international project management and construction division of Lend Lease Group.-History:...
in 2004.