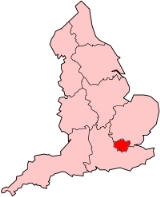 Shared services are borough council services shared between two or more boroughs. Shared services were previously resisted due to councils jealously guarding their authority however as the need for budget cuts in the late 2000s became apparent some councils have sought service mergers. Westminster and Hammersmith & Fulham will merge their education services, including school admissions and transport by 2011. In October 2010 Westminster, Hammersmith & Fulham and Kensington & Chelsea announced plans to merge all their services to create a "super-council". Each would retain its own political identity, leadership and councillors but staff and budgets would be combined for cost savings. Lambeth and Southwark likewise expressed an interest in sharing services.

There are three boroughs which do not use the term "London Borough of" in their names. They are Westminster, which is termed the City of Westminster as it has city status
City status in the United Kingdom
City status in the United Kingdom is granted by the British monarch to a select group of communities. The holding of city status gives a settlement no special rights other than that of calling itself a "city". Nonetheless, this appellation carries its own prestige and, consequently, competitions...
, Kingston upon Thames and Kensington and Chelsea, which are termed "Royal Borough of", due to their Royal borough status. The Queen
Elizabeth II of the United Kingdom
Elizabeth II is the constitutional monarch of 16 sovereign states known as the Commonwealth realms: the United Kingdom, Canada, Australia, New Zealand, Jamaica, Barbados, the Bahamas, Grenada, Papua New Guinea, the Solomon Islands, Tuvalu, Saint Lucia, Saint Vincent and the Grenadines, Belize,...
has also bestowed the status of Royal Borough upon Greenwich, to take effect in the year of the Diamond Jubilee
Diamond Jubilee
A Diamond Jubilee is a celebration held to mark a 60th anniversary in the case of a person or a 75th anniversary in the case of an event.- Thailand :...
in 2012.

They had wider authority than the inner London metropolitan boroughs
Metropolitan boroughs of the County of London
The term metropolitan borough was used from 1900 to 1965, for the subdivisions of the County of London created by the London Government Act 1899....
and neighbouring urban district
Urban district
In the England, Wales and Ireland, an urban district was a type of local government district that covered an urbanised area. Urban districts had an elected Urban District Council , which shared local government responsibilities with a county council....
s and municipal borough
Municipal borough
Municipal boroughs were a type of local government district which existed in England and Wales between 1835 and 1974, in Northern Ireland from 1840 to 1973 and in the Republic of Ireland from 1840 to 2002...
s which they mostly replaced, but less power than the three county borough
County borough
County borough is a term introduced in 1889 in the United Kingdom of Great Britain and Ireland , to refer to a borough or a city independent of county council control. They were abolished by the Local Government Act 1972 in England and Wales, but continue in use for lieutenancy and shrievalty in...
s of Croydon, West Ham and East Ham, which ceased to exist at the same time.

The City of London
City of London
The City of London is a small area within Greater London, England. It is the historic core of London around which the modern conurbation grew and has held city status since time immemorial. The City’s boundaries have remained almost unchanged since the Middle Ages, and it is now only a tiny part of...
is administered by its own distinct body, the City of London Corporation, which predates the London boroughs.

The boroughs were created as follows. There have been some changes to boundaries and some boroughs have been renamed since 1965.