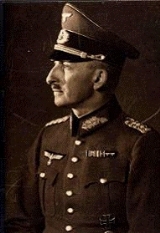 Arnim was born in Ernsdorf
Jaworze, Silesian Voivodeship
Jaworze is a village and the seat of Gmina Jaworze in Bielsko County, Silesian Voivodeship, southern Poland. It has a population of 6,195. It lies in the historical region of Cieszyn Silesia and was first mentioned in a written document in 1305....
in the Prussian
Kingdom of Prussia
The Kingdom of Prussia was a German kingdom from 1701 to 1918. Until the defeat of Germany in World War I, it comprised almost two-thirds of the area of the German Empire...
Province of Silesia
Province of Silesia
The Province of Silesia was a province of the Kingdom of Prussia from 1815 to 1919.-Geography:The territory comprised the bulk of the former Bohemian crown land of Silesia and the County of Kladsko, which King Frederick the Great had conquered from the Austrian Habsburg Monarchy in the 18th...
, the son of General Hans von Arnim (1861–1931) and Martha Honrichs (1865–1953). He served in the German Army
German Army (German Empire)
The German Army was the name given the combined land forces of the German Empire, also known as the National Army , Imperial Army or Imperial German Army. The term "Deutsches Heer" is also used for the modern German Army, the land component of the German Bundeswehr...
from 1907 until the end of World War II
World War II
World War II, or the Second World War , was a global conflict lasting from 1939 to 1945, involving most of the world's nations—including all of the great powers—eventually forming two opposing military alliances: the Allies and the Axis...
. During the First World War he saw action on both the Eastern
Eastern Front (World War I)
The Eastern Front was a theatre of war during World War I in Central and, primarily, Eastern Europe. The term is in contrast to the Western Front. Despite the geographical separation, the events in the two theatres strongly influenced each other...
and Western
Western Front (World War I)
Following the outbreak of World War I in 1914, the German Army opened the Western Front by first invading Luxembourg and Belgium, then gaining military control of important industrial regions in France. The tide of the advance was dramatically turned with the Battle of the Marne...
fronts. After the war he remained in the Reichswehr
Reichswehr
The Reichswehr formed the military organisation of Germany from 1919 until 1935, when it was renamed the Wehrmacht ....
and rose to command the elite 68th Infantry Regiment in Berlin
Berlin
Berlin is the capital city of Germany and is one of the 16 states of Germany. With a population of 3.45 million people, Berlin is Germany's largest city. It is the second most populous city proper and the seventh most populous urban area in the European Union...
.

With the rise of Nazi Germany
Nazi Germany
Nazi Germany , also known as the Third Reich , but officially called German Reich from 1933 to 1943 and Greater German Reich from 26 June 1943 onward, is the name commonly used to refer to the state of Germany from 1933 to 1945, when it was a totalitarian dictatorship ruled by...
, Arnim was made a major-general in 1938. He commanded the 52. Infanterie-Division
52nd Infantry Division (Germany)
The 52nd Infantry Division served in southern Poland, close to Katowice and were primarily a division for training with a lot of young cadets.The officials were especially selected for training young boys...
in both the Battles for Poland
Invasion of Poland (1939)
The Invasion of Poland, also known as the September Campaign or 1939 Defensive War in Poland and the Poland Campaign in Germany, was an invasion of Poland by Germany, the Soviet Union, and a small Slovak contingent that marked the start of World War II in Europe...
and France
Battle of France
In the Second World War, the Battle of France was the German invasion of France and the Low Countries, beginning on 10 May 1940, which ended the Phoney War. The battle consisted of two main operations. In the first, Fall Gelb , German armoured units pushed through the Ardennes, to cut off and...
. In October 1940, Arnim was given command of the 17. Panzer-Division. With the outbreak of the war
Operation Barbarossa
Operation Barbarossa was the code name for Germany's invasion of the Soviet Union during World War II that began on 22 June 1941. Over 4.5 million troops of the Axis powers invaded the USSR along a front., the largest invasion in the history of warfare...
against the Soviet Union
Soviet Union
The Soviet Union , officially the Union of Soviet Socialist Republics , was a constitutionally socialist state that existed in Eurasia between 1922 and 1991....
, he was promoted to lieutenant general
Lieutenant General
Lieutenant General is a military rank used in many countries. The rank traces its origins to the Middle Ages where the title of Lieutenant General was held by the second in command on the battlefield, who was normally subordinate to a Captain General....
under Heinz Guderian
Heinz Guderian
Heinz Wilhelm Guderian was a German general during World War II. He was a pioneer in the development of armored warfare, and was the leading proponent of tanks and mechanization in the Wehrmacht . Germany's panzer forces were raised and organized under his direction as Chief of Mobile Forces...
, but was seriously wounded a few days after the start of the campaign. He was promoted to General der Panzertruppe
General der Panzertruppe
General der Panzertruppe was a rank of German Army General introduced by the Wehrmacht in 1935. As the commander of a Panzer Corp this rank corresponds to a US Army Lieutenant-General...
on 1 October 1941 and commanded the XXXIX. Panzerkorps until November 1942, when he was placed in command of the 5th Panzer Army under Erwin Rommel
Erwin Rommel
Erwin Johannes Eugen Rommel , popularly known as the Desert Fox , was a German Field Marshal of World War II. He won the respect of both his own troops and the enemies he fought....
in North Africa
North Africa
North Africa or Northern Africa is the northernmost region of the African continent, linked by the Sahara to Sub-Saharan Africa. Geopolitically, the United Nations definition of Northern Africa includes eight countries or territories; Algeria, Egypt, Libya, Morocco, South Sudan, Sudan, Tunisia, and...
. When Adolf Hitler
Adolf Hitler
Adolf Hitler was an Austrian-born German politician and the leader of the National Socialist German Workers Party , commonly referred to as the Nazi Party). He was Chancellor of Germany from 1933 to 1945, and head of state from 1934 to 1945...
refused to allow Rommel to return to Tunisia
Tunisia
Tunisia , officially the Tunisian RepublicThe long name of Tunisia in other languages used in the country is: , is the northernmost country in Africa. It is a Maghreb country and is bordered by Algeria to the west, Libya to the southeast, and the Mediterranean Sea to the north and east. Its area...
, Arnim was promoted to full general (Generaloberst) on 4 December 1942, and made Commander-in-Chief of Army Group Africa and de facto commander of the Afrika Korps
Afrika Korps
The German Africa Corps , or the Afrika Korps as it was popularly called, was the German expeditionary force in Libya and Tunisia during the North African Campaign of World War II...
from 9 March 1943 until his capture by the British Indian Army's 4th Infantry Division two months later on 12 May 1943. After he was captured, Arnim allegedly expected to be met by his opposite numbers and asked to see Dwight D. Eisenhower
Dwight D. Eisenhower
Dwight David "Ike" Eisenhower was the 34th President of the United States, from 1953 until 1961. He was a five-star general in the United States Army...
. The American general replied to his aides to get as much information out of him as they could, but a personal meeting was out of the question. He would not meet with any German officers until the final surrender.

Arnim served the rest of the war as a British prisoner of war
Prisoner of war
A prisoner of war or enemy prisoner of war is a person, whether civilian or combatant, who is held in custody by an enemy power during or immediately after an armed conflict...
interned along with 24 other German general officers at Camp Clinton
Camp Clinton
Camp Clinton was a World War II prisoner of war facility located in Clinton, Mississippi, just off present-day McRaven Road, east of Springridge Road. Camp Clinton was home to 3,000 German and Italian POWs, most of whom had been captured in Africa and were members of the Afrika Korps...
, Mississippi, and was released on 1 July 1947. He returned to Germany and died in Bad Wildungen
Bad Wildungen
Bad Wildungen is a state-run spa and a small town in Waldeck-Frankenberg district in Hesse, Germany. It is located on the German Framework Road.-Geography:-Location:...
, Hesse
Hesse
Hesse or Hessia is both a cultural region of Germany and the name of an individual German state.* The cultural region of Hesse includes both the State of Hesse and the area known as Rhenish Hesse in the neighbouring Rhineland-Palatinate state...
.

Arnim's Steyr 1500A Afrika Korps
Afrika Korps
The German Africa Corps , or the Afrika Korps as it was popularly called, was the German expeditionary force in Libya and Tunisia during the North African Campaign of World War II...
staff car from the north African campaign is exhibited at Eastbourne Redoubt
Eastbourne Redoubt
Eastbourne Redoubt is a fort on what is now Royal Parade, Eastbourne, East Sussex, England.-History:The Redoubt was built between 1804 and 1810 to support the associated Martello towers in defending against the threat of an invasion by Napoleon. It has defended the Eastbourne coast for nearly 200...
in the United Kingdom
United Kingdom
The United Kingdom of Great Britain and Northern IrelandIn the United Kingdom and Dependencies, other languages have been officially recognised as legitimate autochthonous languages under the European Charter for Regional or Minority Languages...
.