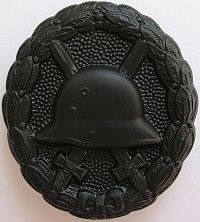 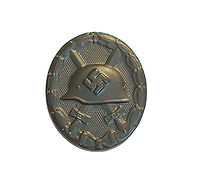 Wound Badge was a German military award for wounded or frost-bitten soldiers of Imperial German Army in World War I
World War I
World War I , which was predominantly called the World War or the Great War from its occurrence until 1939, and the First World War or World War I thereafter, was a major war centred in Europe that began on 28 July 1914 and lasted until 11 November 1918...
, the Reichswehr
Reichswehr
The Reichswehr formed the military organisation of Germany from 1919 until 1935, when it was renamed the Wehrmacht ....
between the wars, and the Wehrmacht
Wehrmacht
The Wehrmacht – from , to defend and , the might/power) were the unified armed forces of Nazi Germany from 1935 to 1945. It consisted of the Heer , the Kriegsmarine and the Luftwaffe .-Origin and use of the term:...
, SS and the auxiliary service organizations during the Second World War. After March 1943, due to the increasing number of Allied bombings, it was also awarded to injured civilians. It was ultimately one of the most common of all Third Reich decorations, yet also one of the most highly prized, since it had to be "bought with blood".

The badge had three versions: black (representing Iron), for those wounded once or twice by hostile action (including air raids), or frost-bitten in the line of duty; silver for being wounded three or four times, or suffering loss of a hand, foot or eye from hostile action (also partial loss of hearing), facial disfigurement or brain damage via hostile action; and in gold (which could be awarded posthumously) for five or more times wounded, total blindness, "loss of manhood", or severe brain damage via hostile action. Badges exist in pressed steel, brass and zinc, as well as some base metal privately commissioned versions. Those of the First World War were also produced in a cutout pattern.

All versions of the Wound Badge were worn on the lower left breast of the uniform or tunic. The badge was worn below all other awards on the left. It is thought that more than 5 million were awarded during World War II
World War II
World War II, or the Second World War , was a global conflict lasting from 1939 to 1945, involving most of the world's nations—including all of the great powers—eventually forming two opposing military alliances: the Allies and the Axis...
. In 1957, a revised version of the Wound Badge was authorised for wear; however, the previous type could still be worn if the swastika was removed (for example by grinding).

The unaltered Second World War version is shown in the illustration to the right.

On 1 June 1940, Hitler decreed that any recipient of the Wound Badge in Silver or Gold be automatically awarded the Iron Cross
Iron Cross
The Iron Cross is a cross symbol typically in black with a white or silver outline that originated after 1219 when the Kingdom of Jerusalem granted the Teutonic Order the right to combine the Teutonic Black Cross placed above a silver Cross of Jerusalem....
2nd Class if that individual did not already have that decoration. This pluralism meant that, for example, a sailor who lost a hand or foot in action while serving on an E-boat
E-boat
E-boats was the designation for Motor Torpedo Boats of the German Navy during World War II. It is commonly held that the E stood for Enemy....
at the Kuban
Kuban
Kuban is a geographic region of Southern Russia surrounding the Kuban River, on the Black Sea between the Don Steppe, Volga Delta and the Caucasus...
bridgehead would receive not only the Wound Badge in Silver, but also the Fast Attack Craft War Badge
Fast Attack Craft War Badge
The E-Boat War Badge is a German military decoration awarded to Kriegsmarine members for service on fast attack craft or torpedo boats worn on the lower part of the left breast pocket of the naval service tunic, underneath the 1st class Iron Cross if awarded, or equivalent grade award...
, the Kuban Shield
Kuban Shield
Kuban Shield is a German military award instituted on September 21, 1943 to commemorate those who fought to preserve the bridgeheads in the Kuban region from February 1943 until they were abandoned in October. Luftwaffe and Kriegsmarine personnel were awarded the shield based on a fairly...
, and the Iron Cross 2nd Class, purely on account of the wound sustained.

The 20th of July Wound Badge is by far the rarest of these awards, as it was only issued to those injured during the failed attempt on Adolf Hitler
Adolf Hitler
Adolf Hitler was an Austrian-born German politician and the leader of the National Socialist German Workers Party , commonly referred to as the Nazi Party). He was Chancellor of Germany from 1933 to 1945, and head of state from 1934 to 1945...
's life at the Wolf's Lair headquarters in Rastenburg, East Prussia
East Prussia
East Prussia is the main part of the region of Prussia along the southeastern Baltic Coast from the 13th century to the end of World War II in May 1945. From 1772–1829 and 1878–1945, the Province of East Prussia was part of the German state of Prussia. The capital city was Königsberg.East Prussia...
. Twenty-four were present when the bomb detonated. One officer was killed and three succumbed to their wounds a short time later. Hitler, believing this to be a "moment of destiny" for him, personally directed the designing of a special badge commemorating the event.

The 20 July Wound Badge is based on the common Wound Badge, but the helmet is slightly higher and larger; it also bears the date "20 Juli 1944" and a facsimile of Hitler's signature below the helmet and date.

Hitler presented the survivors with the special wound badge as well as a unique award document in a ceremony on 2 September 1944. Although Hitler had been injured in the bombing, he did not give one of these badges to himself. Hitler had earned his own Wound Badge (in black) in World War I. He had awarded himself the Golden Party Badge
Golden Party Badge
The Golden Party Badge was a special badge of the Nazi Party. The first 100,000 members who had joined and had uninterrupted service in the Party were given the right to wear it...
number 1, but this was a political badge and not a military medal.

The four posthumous awards were sent to the recipients' next-of-kin. These medals were all plated in gold, including the background.

The badge replaced the basic 1939 Wound Badge on those persons who were presented the 20 July Badge. It is important to note however that this badge was more a personal gift from Hitler to those involved, and was intended to be a treasured one-off souvenir of a momentous historical event, and thus was not expected to be worn. While Field Marshal Keitel and Colonel-General Jodl for example did wear their 20 July wound badges on their tunics, other recipients preferred to wear their regular wound badges.

Recipients of the 20 July wound badge could have their 20 July wound badges upgraded if they earned higher grades of the Wound Badge. Konteradmiral
Counter Admiral
Counter admiral is a rank found in many navies of the world, but no longer used in English-speaking countries, where the equivalent rank is rear admiral...
Hans-Erich Voss
Hans-Erich Voss
Hans-Erich Voss was a German Vice Admiral and one of the final occupants of the Führerbunker during the battle of Berlin in 1945....
eventually had the 20 July Wound Badge in all three grades, earning it in black on 20 July 1944, and having it upgraded twice for subsequent battles.
The source of this article is wikipedia, the free encyclopedia.  The text of this article is licensed under the GFDL.