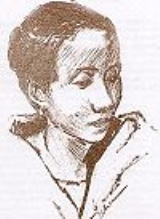 Gregoria de Jesús was born in the city of Caloocan
Caloocan City
The City of Caloocan is one of the cities and municipalities that comprises the Metro Manila region in the Philippines. It is a major residential area inside Metro Manila...
to a Catholic
Catholic
The word catholic comes from the Greek phrase , meaning "on the whole," "according to the whole" or "in general", and is a combination of the Greek words meaning "about" and meaning "whole"...
middle-class family
Family
In human context, a family is a group of people affiliated by consanguinity, affinity, or co-residence. In most societies it is the principal institution for the socialization of children...
. Her father, Nicolás de Jesús, was a carpenter
Carpenter
A carpenter is a skilled craftsperson who works with timber to construct, install and maintain buildings, furniture, and other objects. The work, known as carpentry, may involve manual labor and work outdoors....
who later served as a gobernadorcillo
Gobernadorcillo
The Gobernadorcillo was a municipal judge or governor in the Philippines during the Spanish colonial period, who carried out in a town the combined charge or responsibility of leadership, economic, and judicial administration. The Gobernadorcillo was the leader of a town or pueblo . In a coastal...
. As a young girl, she was an exceptional student and a silver medal recipient in an examination organized by the governor general and parish priest. When she became a secondary school student, she was induced by her parents to stay home and look after her younger sister and the family's farm, since both of her older brothers moved to Manila
Manila
Manila is the capital of the Philippines. It is one of the sixteen cities forming Metro Manila.Manila is located on the eastern shores of Manila Bay and is bordered by Navotas and Caloocan to the north, Quezon City to the northeast, San Juan and Mandaluyong to the east, Makati on the southeast,...
to continue their education.

When Gregoria de Jesús was only 18 years old, Andrés Bonifacio fell in love with her and wanted to marry her. He revealed his intentions to her parents, but her father refused and was against their marriage because Andrés was a Freemason. After almost six months, she had fallen in love with him. She revealed that to her father and asked for his approval on their marriage and the father agreed.

before they got married on March 1893 she joined the katipuneros they got married at Binondo Church. A week later, they were married again in the presence of the Katipuneros, who did not approve of their marriage in a Catholic church. On the evening of the same day, the women’s chapter of the Katipunan was formed, and she was appointed its vice-president and the custodian of the Katipunan documents. She was designated the code name "Lakambini" (Tagalog
Tagalog language
Tagalog is an Austronesian language spoken as a first language by a third of the population of the Philippines and as a second language by most of the rest. It is the first language of the Philippine region IV and of Metro Manila...
for goddess or Muse
Muse
The Muses in Greek mythology, poetry, and literature, are the goddesses who inspire the creation of literature and the arts. They were considered the source of the knowledge, related orally for centuries in the ancient culture, that was contained in poetic lyrics and myths...
) and swore to remain loyal to the Katipunan's holy purposes. The Spanish police usually came unannounced, and Gregoria used to gather all the documents and drive her car all night and return only when it is safe.

A year later, she returned to her family's house, because she was pregnant. She gave birth to their only son, who she christen
Christen
-People:* Adolf Christen , court actor, theater director and theater manager* Brian Christen , Canadian cricketer* Fritz Christen , German Waffen-SS soldier of WWII era* Georges Christen , Luxembourgian strongman...
ed Andrés, after her husband. Two months later, during the Holy Week
Holy Week
Holy Week in Christianity is the last week of Lent and the week before Easter...
of 1896, Gregoria and her husband returned to Manila to find their house destroyed by a fire. The couple were forced to live in friends' and family houses, but had to move quickly from house to house. A few months later, their child, Andrés, died of smallpox
Smallpox
Smallpox was an infectious disease unique to humans, caused by either of two virus variants, Variola major and Variola minor. The disease is also known by the Latin names Variola or Variola vera, which is a derivative of the Latin varius, meaning "spotted", or varus, meaning "pimple"...
.

On 19 August 1896, the Katipunan was exposed and its secrets were revealed by Teodoro Patino, a disgruntled member. The Spanish forces reacted quickly to halt the revolution. Many Filipinos were arrested, jailed, and shot, but Andrés and Gregoria were hiding. The Spanish government was able to tighten its surveillance over the Katipunan. The remaining Katipuneros gathered and planned an attack on a Spanish gunpowder storehouse. With an army of almost 800, the Katipuneros were successful in their first attack, and were encouraged to advance to Manila, but Spanish reinforcements arrived, routing the Katipuneros. Hundreds of the Katipuneros were killed and captured. Furthermore, an inner conflict between Andrés and Emilio Aguinaldo, another leader of the Katipunan, had weakened them. On 8 May 1897, Andrés was captured by Aguinaldo's officers, and was sentenced to death.

Julio Nakpil, a commander of the Katipunan troops in northern Philippines. The two fell in love, and were married in a Catholic church on 10 December 1898 in Manila. After the end of the Philippine Revolution and after peace was restored in the Philippines, Gregoria lived with her husband and eight children in a house with a well-known Filipino philanthropist
Philanthropist
A philanthropist is someone who engages in philanthropy; that is, someone who donates his or her time, money, and/or reputation to charitable causes...
, Dr. Ariston Bautista, and his wife, Petrona Nakpil. The doctor took good care of her and her children and helped raise them and educate them.

De Jesús died
Death
Death is the permanent termination of the biological functions that sustain a living organism. Phenomena which commonly bring about death include old age, predation, malnutrition, disease, and accidents or trauma resulting in terminal injury....
in 1943 during the Japan
Japan
Japan is an island nation in East Asia. Located in the Pacific Ocean, it lies to the east of the Sea of Japan, China, North Korea, South Korea and Russia, stretching from the Sea of Okhotsk in the north to the East China Sea and Taiwan in the south...
ese occupation of the Philippines
Philippines
The Philippines , officially known as the Republic of the Philippines , is a country in Southeast Asia in the western Pacific Ocean. To its north across the Luzon Strait lies Taiwan. West across the South China Sea sits Vietnam...
.
The source of this article is wikipedia, the free encyclopedia.  The text of this article is licensed under the GFDL.