Encyclopedia
The Gobernadorcillo was a municipal judge or governor
Governor
A governor is a governing official, usually the executive of a non-sovereign level of government, ranking under the head of state...
in the Philippines
Philippines
The Philippines , officially known as the Republic of the Philippines , is a country in Southeast Asia in the western Pacific Ocean. To its north across the Luzon Strait lies Taiwan. West across the South China Sea sits Vietnam...
during the Spanish colonial period, who carried out in a town the combined charge or responsibility of leadership, economic, and judicial administration. The Gobernadorcillo was the leader of a town or pueblo (people or population). In a coastal town, the "Gobernadocillo" functioned as a Port Captain. His appointment was done through an exclusive nomination provided by the Spanish law. His term of office lasted for two years. The position of a Gobernadorcillo was honorary and mandatory in order to afford him of those valid exemptions signified in the Philippine law. At the end of his biennial term he would enter and would form part of the Principalía
Principalia
The Principalía or noble class was the ruling and, usually, the educated upper class in the towns of colonial Philippines, composed of the Gobernadorcillo , and the Cabezas de Barangay who governed the districts. The distinction or status of being part of the Principalía is a heriditary right...
, and was entitled to enjoy the honors and preeminence inherent to this state. This "Mayor", who was at the same time "Justice of Peace", and "Port Captain" was directly responsible to the Governor of the province in the exercise of his office.

In 1893, the Maura law was passed with the aim of making the municipal governments in the Philippine Islands more effective and autonomous. One of the changes that this law brought about was the reorganization of certain structures of town governments, among which was the changing of the designation of town head from Gobernadorcillo to "Capitan Municipal", effective 1895.

The Gobernadocillos were elected from among the ranks of the Principalía by twelve senior Cabeza de Barangay
Cabeza de Barangay
The Cabeza de Barangay was the leader or chief of a barangay in the Philippines during the Spanish colonial period. The post was inherited from the first datus who became cabezas de barangay when the many independent barangays fell under the rule of the Spanish Crown...
(Chief of the Barangay). The electors had to choose three candidates who were to compose a list, called the "terna". It was a must that the respective place of each nominee in the "terna" be indicated. It is to be noted that the candidate must be able to speak, read, and write in the Castillan language. If one who did not possess these qualities was elected, the election would be considered null and void. The same requirements were demanded in the election of officers of justice in the municipalities.

The election of a Gobernadorcillo was done in balloting. It was authorized by a notary and presided over by the provincial chief. The priest of the town may be present if he wishes, to express what opinions he may consider fitting, but for no other purpose. The sealed envelops containing the election results in provinces near Manila were sent to superior offices of the government in the capital. From the list or the "terna", the Governor General appoints the Gobernadorcillo, taking into consideration the report of the president of the election. In distant territories, the chief of each province appointed the nominee who got the highest vote.

Among the local leaders in Spanish Philippines, the Gobernadorcillos and Filipino officials of justice received the greatest consideration from the Spanish Crown officials. The colonial officials were under obligation to show them the honor corresponding to their respective duties. They were allowed to sit in the houses of the Spanish Provincial Governors, and in any other places. They were not left to remain standing. It was not permitted for Spanish Parish Priests to treat these Filipino nobles with less consideration.

On the day on which the Gobernadorcillo would take on government duties, his town would hold a grand celebration. The festive banquet was offered in the municipal or city hall where he would occupy a seat, adorned by the coat of arms of Spain and with fanciful designs, if his social footing was of a respectable antiquity.

On holy days the town officials would go to the Church, together in one group. The Principalía
Principalia
The Principalía or noble class was the ruling and, usually, the educated upper class in the towns of colonial Philippines, composed of the Gobernadorcillo , and the Cabezas de Barangay who governed the districts. The distinction or status of being part of the Principalía is a heriditary right...
and "cuadrilleros" (police patrol or assistance) formed two lines in front of the Gobernadorcillo. They were preceded by a band playing the music as they would process towards the Church. In the Church, the Gobernadorcillo occupied a seat in precedence among those of the chiefs or Cabezas de Barangay, who had benches of honor. After the Mass
Mass
Mass can be defined as a quantitive measure of the resistance an object has to change in its velocity.In physics, mass commonly refers to any of the following three properties of matter, which have been shown experimentally to be equivalent:...
, they would usually go to the parish rectory to pay their respects to the parish priest. Then, they would return to the tribunal
Tribunal
A tribunal in the general sense is any person or institution with the authority to judge, adjudicate on, or determine claims or disputes—whether or not it is called a tribunal in its title....
(municipal hall or city hall) in the same order, and still accompanied by the band playing a loud double quick march called in Spanish as paso doble.

The Gobernadorcillo was always accompanied by an "alguecil" or "policia" (police) whenever he went about the streets of his town.

The Gobernadorcillos exercised the command of the towns. They were Port Captains in coastal towns. Their office corresponds to that of the alcalde
Alcalde
Alcalde , or Alcalde ordinario, is the traditional Spanish municipal magistrate, who had both judicial and administrative functions. An alcalde was, in the absence of a corregidor, the presiding officer of the Castilian cabildo and judge of first instance of a town...
s and municipal judges of the Peninsula. They perform at once the functions of judges and even of notaries with defined powers. They also have the rights and powers to elect assistants and several lieutenants and alguaciles, proportionate in number to the inhabitants of the town. 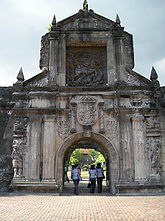