Encyclopedia
A great circle, also known as a Riemannian circle
Riemannian circle
In metric space theory and Riemannian geometry, the Riemannian circle is a great circle equipped with its great-circle distance...
, of a sphere
Sphere
A sphere is a perfectly round geometrical object in three-dimensional space, such as the shape of a round ball. Like a circle in two dimensions, a perfect sphere is completely symmetrical around its center, with all points on the surface lying the same distance r from the center point...
is the intersection of the sphere and a plane which passes through the center point of the sphere, as opposed to a general circle of a sphere where the plane is not required to pass through the center. (A small circle is the intersection of the sphere and a plane which does not pass through the center.) Any diameter
Diameter
In geometry, a diameter of a circle is any straight line segment that passes through the center of the circle and whose endpoints are on the circle. The diameters are the longest chords of the circle...
of any great circle coincides with a diameter of the sphere, and therefore all great circles have the same circumference
Circumference
The circumference is the distance around a closed curve. Circumference is a special perimeter.-Circumference of a circle:The circumference of a circle is the length around it....
as each other, and have the same center as the sphere. A great circle is the largest circle that can be drawn on any given sphere. Every circle
Circle
A circle is a simple shape of Euclidean geometry consisting of those points in a plane that are a given distance from a given point, the centre. The distance between any of the points and the centre is called the radius....
in Euclidean space
Euclidean space
In mathematics, Euclidean space is the Euclidean plane and three-dimensional space of Euclidean geometry, as well as the generalizations of these notions to higher dimensions...
is a great circle of exactly one sphere.

In higher dimensions, the great circles on the n-sphere are the intersection of the n-sphere with two-planes that pass through the origin in the Euclidean space Rn+1. 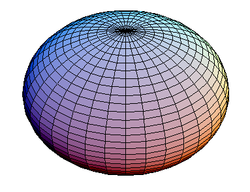 Strictly speaking the Earth is not a perfect sphere
Reference ellipsoid
In geodesy, a reference ellipsoid is a mathematically-defined surface that approximates the geoid, the truer figure of the Earth, or other planetary body....
(it is an oblate spheroid or ellipsoid – i.e., slightly compressed at the poles), which means that the shortest distance between two points (a geodesic) is not quite a great circle. The equatorial radius of the earth is about 6378.137 kilometers. The polar radius of the earth is about 6356.752 kilometers (about 21.4 kilometers less). Nevertheless, the sphere model can be considered a first approximation.

When long distance aviation or nautical routes are drawn on a flat map (for instance, the Mercator projection
Mercator projection
The Mercator projection is a cylindrical map projection presented by the Belgian geographer and cartographer Gerardus Mercator, in 1569. It became the standard map projection for nautical purposes because of its ability to represent lines of constant course, known as rhumb lines or loxodromes, as...
), they often look curved. This is because they lie on great circles. A route that would appear as a straight line on the map would actually be longer. An exception is the gnomonic projection
Gnomonic projection
A gnomonic map projection displays all great circles as straight lines. Thus the shortest route between two locations in reality corresponds to that on the map. This is achieved by projecting, with respect to the center of the Earth , the Earth's surface onto a tangent plane. The least distortion...
, in which all straight lines represent great circles.

On a spherical Earth, the meridians
Meridian (geography)
A meridian is an imaginary line on the Earth's surface from the North Pole to the South Pole that connects all locations along it with a given longitude. The position of a point along the meridian is given by its latitude. Each meridian is perpendicular to all circles of latitude...
(or lines of longitude) are great circles, as is the equator
Equator
An equator is the intersection of a sphere's surface with the plane perpendicular to the sphere's axis of rotation and containing the sphere's center of mass....
. Lines of latitude
Latitude
In geography, the latitude of a location on the Earth is the angular distance of that location south or north of the Equator. The latitude is an angle, and is usually measured in degrees . The equator has a latitude of 0°, the North pole has a latitude of 90° north , and the South pole has a...
are not great circles, because they are smaller than the equator; their centers are not at the center of the Earth -- they are small circle
Small circle
A circle of a sphere is a circle defined as the intersection of a sphere and a plane. If the plane contains the center of the sphere then the circle is called a great circle, otherwise it is a small circle...
s instead. Since Earth is not a perfect sphere, the equator (which is generally considered a spherical great circle) is about 40,075 km, while a north-south meridian line (which is an ellipse) is almost 40,008 km. The quadratic mean or root mean square
Root mean square
In mathematics, the root mean square , also known as the quadratic mean, is a statistical measure of the magnitude of a varying quantity. It is especially useful when variates are positive and negative, e.g., sinusoids...
of these extremes provides a decent approximation of the average great-circle circumference, about 40041.5 km.

Great circle routes are used by ships and aircraft where currents and winds are not a significant factor. Flight length
Flight length
In aviation, the flight length is defined as the time airborne during a flight.- Domestic :A short-haul domestic flight is commonly categorized into being no longer than 1.5 hours in length, meaning that all domestic flights within a country such as the United Kingdom are short-haul...
s can therefore often be approximated to the great-circle distance
Great-circle distance
The great-circle distance or orthodromic distance is the shortest distance between any two points on the surface of a sphere measured along a path on the surface of the sphere . Because spherical geometry is rather different from ordinary Euclidean geometry, the equations for distance take on a...
between two airports. For aircraft travelling west between continents in the northern hemisphere these paths will extend northward near or into the Arctic
Arctic
The Arctic is a region located at the northern-most part of the Earth. The Arctic consists of the Arctic Ocean and parts of Canada, Russia, Greenland, the United States, Norway, Sweden, Finland, and Iceland. The Arctic region consists of a vast, ice-covered ocean, surrounded by treeless permafrost...
region, however easterly flights will often fly a more southerly track to take advantage of the jet stream
Jet stream
Jet streams are fast flowing, narrow air currents found in the atmospheres of some planets, including Earth. The main jet streams are located near the tropopause, the transition between the troposphere and the stratosphere . The major jet streams on Earth are westerly winds...
.

For navigational convenience, Great Circle routes are often broken into a series of shorter rhumb line
Rhumb line
In navigation, a rhumb line is a line crossing all meridians of longitude at the same angle, i.e. a path derived from a defined initial bearing...
s which allow the use of constant headings between waypoint
Waypoint
A waypoint is a reference point in physical space used for purposes of navigation.-Concept:Waypoints are sets of coordinates that identify a point in physical space. Coordinates used can vary depending on the application. For terrestrial navigation these coordinates can include longitude and...
s along the Great Circle.

Consider the class of all regular paths from a point p to another point q. Introduce spherical coordinates so that p coincides with the north pole. Any curve on the sphere that does not intersect either pole, except possibly at the endpoints, can be parametrized by

provided we allow φ to take on arbitrary real values. The infinitesimal arc length in these coordinates is

So the length of a curve γ from p to q is a functional
Functional (mathematics)
In mathematics, and particularly in functional analysis, a functional is a map from a vector space into its underlying scalar field. In other words, it is a function that takes a vector as its input argument, and returns a scalar...
of the curve given by

Note that S[γ] does not exceed the length of the meridian from p to q:

Since the starting point and ending point are fixed, S is minimized if and only if φ' = 0, so the curve must lie on a meridian of the sphere φ = φ0 = constant. In Cartesian coordinates, this is

which is a plane through the origin, i.e., the center of the sphere.