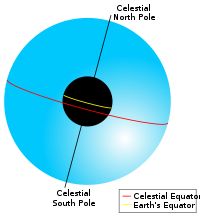 In astronomy
Astronomy
Astronomy is a natural science that deals with the study of celestial objects and phenomena that originate outside the atmosphere of Earth...
and navigation
Navigation
Navigation is the process of monitoring and controlling the movement of a craft or vehicle from one place to another. It is also the term of art used for the specialized knowledge used by navigators to perform navigation tasks...
, the celestial sphere is an imaginary
Imagination
Imagination, also called the faculty of imagining, is the ability of forming mental images, sensations and concepts, in a moment when they are not perceived through sight, hearing or other senses...
sphere
Sphere
A sphere is a perfectly round geometrical object in three-dimensional space, such as the shape of a round ball. Like a circle in two dimensions, a perfect sphere is completely symmetrical around its center, with all points on the surface lying the same distance r from the center point...
of arbitrarily large radius
Radius
In classical geometry, a radius of a circle or sphere is any line segment from its center to its perimeter. By extension, the radius of a circle or sphere is the length of any such segment, which is half the diameter. If the object does not have an obvious center, the term may refer to its...
, concentric
Concentric
Concentric objects share the same center, axis or origin with one inside the other. Circles, tubes, cylindrical shafts, disks, and spheres may be concentric to one another...
with the Earth
Earth
Earth is the third planet from the Sun, and the densest and fifth-largest of the eight planets in the Solar System. It is also the largest of the Solar System's four terrestrial planets...
and rotating upon the same axis. All objects in the sky
Sky
The sky is the part of the atmosphere or outer space visible from the surface of any astronomical object. It is difficult to define precisely for several reasons. During daylight, the sky of Earth has the appearance of a pale blue surface because the air scatters the sunlight. The sky is sometimes...
can be thought of as projected
Projective geometry
In mathematics, projective geometry is the study of geometric properties that are invariant under projective transformations. This means that, compared to elementary geometry, projective geometry has a different setting, projective space, and a selective set of basic geometric concepts...
upon the celestial sphere. Projected upward from Earth's equator
Equator
An equator is the intersection of a sphere's surface with the plane perpendicular to the sphere's axis of rotation and containing the sphere's center of mass....
and pole
Geographical pole
A geographical pole is either of the two points—the north pole and the south pole—on the surface of a rotating planet where the axis of rotation meets the surface of the body...
s are the celestial equator
Celestial equator
The celestial equator is a great circle on the imaginary celestial sphere, in the same plane as the Earth's equator. In other words, it is a projection of the terrestrial equator out into space...
and the celestial pole
Celestial pole
The north and south celestial poles are the two imaginary points in the sky where the Earth's axis of rotation, indefinitely extended, intersects the imaginary rotating sphere of stars called the celestial sphere...
s. The celestial sphere is a very practical tool for positional astronomy.

The Eudoxan planetary model, on which the Aristotelian
Aristotle
Aristotle was a Greek philosopher and polymath, a student of Plato and teacher of Alexander the Great. His writings cover many subjects, including physics, metaphysics, poetry, theater, music, logic, rhetoric, linguistics, politics, government, ethics, biology, and zoology...
and Ptolemaic
Ptolemy
Claudius Ptolemy , was a Roman citizen of Egypt who wrote in Greek. He was a mathematician, astronomer, geographer, astrologer, and poet of a single epigram in the Greek Anthology. He lived in Egypt under Roman rule, and is believed to have been born in the town of Ptolemais Hermiou in the...
models were based, was the first geometric explanation for the "wandering" of the classical planets. The outer most of these "crystal spheres"
Celestial spheres
The celestial spheres, or celestial orbs, were the fundamental entities of the cosmological models developed by Plato, Eudoxus, Aristotle, Ptolemy, Copernicus and others...
was thought to carry the fixed stars. Eudoxus used 27 concentric spherical solids to answer Plato's
Plato
Plato , was a Classical Greek philosopher, mathematician, student of Socrates, writer of philosophical dialogues, and founder of the Academy in Athens, the first institution of higher learning in the Western world. Along with his mentor, Socrates, and his student, Aristotle, Plato helped to lay the...
challenge: "By the assumption of what uniform and orderly motions can the apparent motions of the planets be accounted for?"

The celestial sphere can be used geocentrically and topocentrically. The former means that it is centered upon an imaginary observer in the center of the Earth, and no parallax
Parallax
Parallax is a displacement or difference in the apparent position of an object viewed along two different lines of sight, and is measured by the angle or semi-angle of inclination between those two lines. The term is derived from the Greek παράλλαξις , meaning "alteration"...
effects need to be taken into account. In the latter case it is centered upon an observer on the surface of the Earth and then horizontal
Horizontal plane
In geometry, physics, astronomy, geography, and related sciences, a plane is said to be horizontal at a given point if it is perpendicular to the gradient of the gravity field at that point— in other words, if apparent gravity makes a plumb bob hang perpendicular to the plane at that point.In...
parallax cannot always be ignored; especially for the Moon
Moon
The Moon is Earth's only known natural satellite,There are a number of near-Earth asteroids including 3753 Cruithne that are co-orbital with Earth: their orbits bring them close to Earth for periods of time but then alter in the long term . These are quasi-satellites and not true moons. For more...
.

The reason for this apparent misadjustment of our clocks is that the Sun is not standing still on the celestial sphere, as the stars do, but moves about 1° per day eastwards over a great circle
Great circle
A great circle, also known as a Riemannian circle, of a sphere is the intersection of the sphere and a plane which passes through the center point of the sphere, as opposed to a general circle of a sphere where the plane is not required to pass through the center...
known as the ecliptic
Ecliptic
The ecliptic is the plane of the earth's orbit around the sun. In more accurate terms, it is the intersection of the celestial sphere with the ecliptic plane, which is the geometric plane containing the mean orbit of the Earth around the Sun...
(which is 360° or a full circle in one year, the annual motion of the Sun). As an angle of 1° corresponds to 4 minutes in time (360° = 24 hours), we need therefore 4 extra minutes of diurnal motion to see the Sun back on (for example) the meridian again, making the duration of one rotation just 24 hours exactly (on the average, ignoring small seasonal variations, see equation of time
Equation of time
The equation of time is the difference between apparent solar time and mean solar time. At any given instant, this difference will be the same for every observer...
)

Normal clocks therefore indicate solar time
Solar time
Solar time is a reckoning of the passage of time based on the Sun's position in the sky. The fundamental unit of solar time is the day. Two types of solar time are apparent solar time and mean solar time .-Introduction:...
. Astronomer
Astronomer
An astronomer is a scientist who studies celestial bodies such as planets, stars and galaxies.Historically, astronomy was more concerned with the classification and description of phenomena in the sky, while astrophysics attempted to explain these phenomena and the differences between them using...
s studying the movements of stars may want clocks indicating sidereal time
Sidereal time
Sidereal time is a time-keeping system astronomers use to keep track of the direction to point their telescopes to view a given star in the night sky...
, going around once in 23h56m (solar time units).

A celestial sphere can also refer to a physical model of the celestial sphere or celestial globe.
Such globes map the constellations on the outside of a sphere, resulting in a mirror image of the constellations as seen from Earth. The oldest surviving example of such an artifact is the globe of the Farnese Atlas
Farnese Atlas
The Farnese Atlas is a 2nd-century Roman marble copy of a Hellenistic sculpture of Atlas kneeling with a globe weighing heavily on his shoulders. It is the oldest extant statue of the Titan of Greek mythology, who is represented in earlier vase-painting, and more important, the oldest known...
sculpture, a 2nd-century copy of an older (Hellenistic period
Hellenistic period
The Hellenistic period or Hellenistic era describes the time which followed the conquests of Alexander the Great. It was so named by the historian J. G. Droysen. During this time, Greek cultural influence and power was at its zenith in Europe and Asia...
, ca. 120 BC) work.