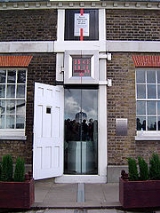 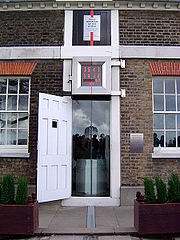 A meridian is an imaginary line on the Earth's surface from the North Pole
North Pole
The North Pole, also known as the Geographic North Pole or Terrestrial North Pole, is, subject to the caveats explained below, defined as the point in the northern hemisphere where the Earth's axis of rotation meets its surface...
to the South Pole
South Pole
The South Pole, also known as the Geographic South Pole or Terrestrial South Pole, is one of the two points where the Earth's axis of rotation intersects its surface. It is the southernmost point on the surface of the Earth and lies on the opposite side of the Earth from the North Pole...
that connects all locations along it with a given longitude
Longitude
Longitude is a geographic coordinate that specifies the east-west position of a point on the Earth's surface. It is an angular measurement, usually expressed in degrees, minutes and seconds, and denoted by the Greek letter lambda ....
. The position of a point along the meridian is given by its latitude
Latitude
In geography, the latitude of a location on the Earth is the angular distance of that location south or north of the Equator. The latitude is an angle, and is usually measured in degrees . The equator has a latitude of 0°, the North pole has a latitude of 90° north , and the South pole has a...
. Each meridian is perpendicular to all circles of latitude
Circle of latitude
A circle of latitude, on the Earth, is an imaginary east-west circle connecting all locations that share a given latitude...
. Each is also the same size, being half of a great circle
Great circle
A great circle, also known as a Riemannian circle, of a sphere is the intersection of the sphere and a plane which passes through the center point of the sphere, as opposed to a general circle of a sphere where the plane is not required to pass through the center...
on the Earth's surface and therefore measuring 20,003.93 km (12,429.9 miles).

The position of the meridian has changed a few times throughout history, mainly due to the transit observatory being built next door to the previous one (to maintain the service to shipping). Such changes have had no significant effect as historically, the accuracy of the determination of longitude was much larger than the change in position. The adoption of WGS84 as the positioning system, has moved the meridian approximately 200 metres east of its last position (measured at Greenwich). The position of the current meridian is not identified at all in Greenwich but may easily be located using a GPS receiver.

For meridians used as references in surveying: