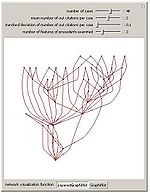 The Wolfram Demonstrations Project is hosted by Wolfram Research, whose stated goal is to bring computational exploration to the widest possible audience. It consists of an organized, open-source collection of small interactive programs called Demonstrations, which are meant to visually and interactively represent ideas from a range of fields. At its launch it contained 1300 demonstrations but this has grown to over 7300.

The Demonstrations run in Mathematica
Mathematica
Mathematica is a computational software program used in scientific, engineering, and mathematical fields and other areas of technical computing...
6 or above and in Wolfram CDF Player which is a free modified version of Wolfram's Mathematica and available for Windows, Linux and Macintosh and can operate as a web browser plugin.

They typically consist of a very direct user interface to a graphic or visualization, which dynamically recomputes in response to user actions such as moving a slider, clicking a button, or dragging a piece of graphics. Each Demonstration also has a brief description about the concept being shown.

The website is organized into topics such as science, mathematics, computer science, art, biology, and finance. They cover a variety of levels, from elementary school mathematics to much more advanced topics, including quantum mechanics and models of biological organisms. The site is aimed at both educators and students, as well as researchers who wish to present their ideas to the broadest possible audience.

Wolfram Research's staff organizes and edits the Demonstrations, which may be created by any user of Mathematica 6, then freely published and freely downloaded. The Demonstrations are open-source, which means that they not only demonstrate the concept itself, but also show how to implement it.

The use of the web to transmit small interactive programs is reminiscent of Sun's
Sun Microsystems
Sun Microsystems, Inc. was a company that sold :computers, computer components, :computer software, and :information technology services. Sun was founded on February 24, 1982...
Java applet
Java applet
A Java applet is an applet delivered to users in the form of Java bytecode. Java applets can run in a Web browser using a Java Virtual Machine , or in Sun's AppletViewer, a stand-alone tool for testing applets...
s, Adobe
Adobe Systems
Adobe Systems Incorporated is an American computer software company founded in 1982 and headquartered in San Jose, California, United States...
's Flash
Adobe Flash
Adobe Flash is a multimedia platform used to add animation, video, and interactivity to web pages. Flash is frequently used for advertisements, games and flash animations for broadcast...
, and the open-source processing
Processing (programming language)
Processing is an open source programming language and integrated development environment built for the electronic arts and visual design communities with the purpose of teaching the basics of computer programming in a visual context, and to serve as the foundation for electronic sketchbooks...
. However, those creating Demonstrations have access to the algorithmic and visualization capabilities of Mathematica making it more suitable for technical demonstrations.

The Demonstrations Project also has similarities to user-generated content websites like Wikipedia
Wikipedia
Wikipedia is a free, web-based, collaborative, multilingual encyclopedia project supported by the non-profit Wikimedia Foundation. Its 20 million articles have been written collaboratively by volunteers around the world. Almost all of its articles can be edited by anyone with access to the site,...
and Flickr
Flickr
Flickr is an image hosting and video hosting website, web services suite, and online community that was created by Ludicorp in 2004 and acquired by Yahoo! in 2005. In addition to being a popular website for users to share and embed personal photographs, the service is widely used by bloggers to...
. However, it provides users with an authoring tool, as well as expert input in the creation of the content. Its business model is similar to Adobe's Acrobat
Adobe Acrobat
Adobe Acrobat is a family of application software developed by Adobe Systems to view, create, manipulate, print and manage files in Portable Document Format . All members of the family, except Adobe Reader , are commercial software, while the latter is available as freeware and can be downloaded...
and Flash strategy of charging for development tools but providing a free reader.

The site won a Parents Choice award in 2008.