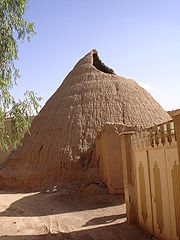 A granary is a storehouse for threshed
Threshing
Threshing is the process of loosening the edible part of cereal grain from the scaly, inedible chaff that surrounds it. It is the step in grain preparation after harvesting and before winnowing, which separates the loosened chaff from the grain...
grain
Cereal
Cereals are grasses cultivated for the edible components of their grain , composed of the endosperm, germ, and bran...
or animal feed
Compound feed
Compound feeds are feedstuffs that are blended from various raw materials and additives. These blends are formulated according to the specific requirements of the target animal...
. In ancient or primitive granaries, pottery
Pottery
Pottery is the material from which the potteryware is made, of which major types include earthenware, stoneware and porcelain. The place where such wares are made is also called a pottery . Pottery also refers to the art or craft of the potter or the manufacture of pottery...
is the most common use of storage in these buildings. Granaries are often built above the ground to keep the stored food away from mice and other animals.

From ancient times grain has been stored in bulk. The oldest granaries yet found date back to 9500 BC
10th millennium BC
The 10th millennium BC marks the beginning of the Mesolithic and Epipaleolithic period, which is the first part of the Holocene epoch. Agriculture, based on the cultivation of primitive forms of millet and rice, occurred in Southwest Asia...
and are located in the Pre-Pottery Neolithic A
Pre-Pottery Neolithic A
Pre-Pottery Neolithic A denotes the first stage in early Levantine Neolithic culture, dating around 9500 to 8500 BC. Archaeological remains are located in the Levantine and upper Mesopotamian region of the Fertile Crescent...
settlements in the Jordan Valley. The first were located in places between other buildings. However beginning around 8500 BC
9th millennium BC
The 9th millennium BC marks the beginning of the Neolithic period.Agriculture spread throughout the Fertile Crescent and use of pottery became more widespread. Larger settlements like Jericho arose along salt and flint trade routes. Northern Eurasia was resettled as the glaciers of the last glacial...
, they were moved inside houses, and by 7500 BC
8th millennium BC
In the 8th millennium BC, agriculture became widely practised in the Fertile Crescent and Anatolia.Pottery became widespread and animal husbandry spread to Africa and Eurasia. World population was approximately 5 million.-Events:*c. 8000 BC—The last glacial period ends.*c...
storage occurred in special rooms. The first granaries measured 3 x 3 m on the outside and had suspended floors that protected the grain from rodents and insects and provided air circulation.

These granaries are followed by those in Mehrgarh
Mehrgarh
Mehrgarh , one of the most important Neolithic sites in archaeology, lies on the "Kachi plain" of Balochistan, Pakistan...
in the Indus Valley from 6000 BC. The ancient Egypt
Ancient Egypt
Ancient Egypt was an ancient civilization of Northeastern Africa, concentrated along the lower reaches of the Nile River in what is now the modern country of Egypt. Egyptian civilization coalesced around 3150 BC with the political unification of Upper and Lower Egypt under the first pharaoh...
ians made a practice of preserving grain in years of plenty against years of scarcity. The climate of Egypt
Egypt
Egypt , officially the Arab Republic of Egypt, Arabic: , is a country mainly in North Africa, with the Sinai Peninsula forming a land bridge in Southwest Asia. Egypt is thus a transcontinental country, and a major power in Africa, the Mediterranean Basin, the Middle East and the Muslim world...
being very dry, grain could be stored in pits for a long time without sensible loss of quality. The silo pit, as it has been termed, has been a favorite way of storing grain from time immemorial in all oriental lands. In Turkey
Turkey
Turkey , known officially as the Republic of Turkey , is a Eurasian country located in Western Asia and in East Thrace in Southeastern Europe...
and Persia, usurers used to buy up wheat
Wheat
Wheat is a cereal grain, originally from the Levant region of the Near East, but now cultivated worldwide. In 2007 world production of wheat was 607 million tons, making it the third most-produced cereal after maize and rice...
or barley
Barley
Barley is a major cereal grain, a member of the grass family. It serves as a major animal fodder, as a base malt for beer and certain distilled beverages, and as a component of various health foods...
when comparatively cheap, and store it in hidden pits against seasons of dearth. In Malta
Malta
Malta , officially known as the Republic of Malta , is a Southern European country consisting of an archipelago situated in the centre of the Mediterranean, south of Sicily, east of Tunisia and north of Libya, with Gibraltar to the west and Alexandria to the east.Malta covers just over in...
a relatively large stock of wheat was preserved in some hundreds of pits (silos) cut in the rock. A single silo stored from 60 to 80 tons of wheat, which, with proper precautions, kept in good condition for four years or more.

Simple storage granaries raised up on four or more posts appeared in the Yangshao culture
Yangshao culture
The Yangshao culture was a Neolithic culture that existed extensively along the central Yellow River in China. The Yangshao culture is dated from around 5000 BC to 3000 BC. The culture is named after Yangshao, the first excavated representative village of this culture, which was discovered in 1921...
in China and after the onset of intensive agriculture in the Korean peninsula during the Mumun pottery period
Mumun pottery period
The Mumun pottery period is an archaeological era in Korean prehistory that dates to approximately 1500-300 BC This period is named after the Korean name for undecorated or plain cooking and storage vessels that form a large part of the pottery assemblage over the entire length of the period, but...
(c. 1000 B.C.) as well as in the Japanese archipelago during the Final Jōmon/Early Yayoi period
Yayoi period
The is an Iron Age era in the history of Japan traditionally dated 300 BC to 300 AD. It is named after the neighbourhood of Tokyo where archaeologists first uncovered artifacts and features from that era. Distinguishing characteristics of the Yayoi period include the appearance of new...
s (c. 800 B.C.). In the archaeological vernacular of Northeast Asia, these features are lumped with those that may have also functioned as residences and together are called 'raised floor buildings'.

Towards the close of the 19th century, warehouses specially intended for holding grain began to multiply in Great Britain
Great Britain
Great Britain or Britain is an island situated to the northwest of Continental Europe. It is the ninth largest island in the world, and the largest European island, as well as the largest of the British Isles...
, but North America
North America
North America is a continent wholly within the Northern Hemisphere and almost wholly within the Western Hemisphere. It is also considered a northern subcontinent of the Americas...
is the home of great granaries, known there as grain elevator
Grain elevator
A grain elevator is a tower containing a bucket elevator, which scoops up, elevates, and then uses gravity to deposit grain in a silo or other storage facility...
s. There are climatic difficulties in the way of storing grain in Great Britain on a large scale, but these difficulties have been largely overcome. To preserve grain in good condition it must be kept away as much as possible from moisture and heat
Heat
In physics and thermodynamics, heat is energy transferred from one body, region, or thermodynamic system to another due to thermal contact or thermal radiation when the systems are at different temperatures. It is often described as one of the fundamental processes of energy transfer between...
. New grain when brought into a warehouse has a tendency to release moisture. Bacteria are more active in this condition and can heat the grain. If the heating is allowed to continue the quality of the grain suffers. An effectual remedy is to turn out the grain in layers, not too thick, on a floor, and to keep turning it over so as to aerate it thoroughly. Grain can thus be conditioned for storage in silos.

In Great Britain
Great Britain
Great Britain or Britain is an island situated to the northwest of Continental Europe. It is the ninth largest island in the world, and the largest European island, as well as the largest of the British Isles...
small granaries were built on mushroom
Mushroom
A mushroom is the fleshy, spore-bearing fruiting body of a fungus, typically produced above ground on soil or on its food source. The standard for the name "mushroom" is the cultivated white button mushroom, Agaricus bisporus; hence the word "mushroom" is most often applied to those fungi that...
shaped stumps called staddle stones
Staddle stones
Staddle stones were originally used as supporting bases for granaries, hayricks, game larders, etc. The staddle stones lifted the granaries above the ground thereby protecting the stored grain from vermin and water seepage...
. They were built of timber frame construction and often had slate roofs. Larger ones were similar to linhays, but with the upper floor enclosed. Access to the first floor was usually via stone staircase on the outside wall.