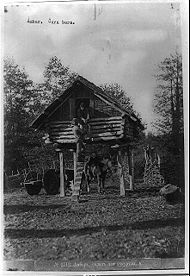 After the harvest, corn, still on the cob, is placed in the crib either with or without the husk
Husk
Husk in botany is the outer shell or coating of a seed. It often refers to the leafy outer covering of an ear of maize as it grows on the plant. Literally, a husk or hull includes the protective outer covering of a seed, fruit or vegetable...
. The typical corn crib had slats in its walls. These slatted sides of the corn crib allow air to circulate through the corn, both allowing it to dry initially and helping it to stay dry. The slats expose the corn to pests, so corn cribs are elevated above the ground beyond the reach of rodents.

Corn cribs were first used by Native Americans
Native Americans in the United States
Native Americans in the United States are the indigenous peoples in North America within the boundaries of the present-day continental United States, parts of Alaska, and the island state of Hawaii. They are composed of numerous, distinct tribes, states, and ethnic groups, many of which survive as...
and were quickly adopted by European settlers. Struggling European settlers often raided corn cribs for food. As a result, at least some Native groups abandoned the corn crib and buried food in caches (Johansen, 125).

Corn crib designs vary greatly. They were originally made of wood, but other materials such as concrete have also been used. The basic corn crib consists of a roofed bin elevated on posts. Another typical, early American design has walls slanted outward. Most of the larger designs have an open space in middle for accessing corn and promoting airflow. In larger designs, this space was often used to store wagons. By the early 20th century, the word "corn crib" was applied to large barns that contained many individual bins of corn.http://www.in.gov/dnr/historic/4251.htm