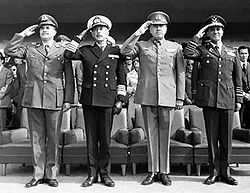 Government Junta of Chile (September 11, 1973 - March 11, 1990) was the military junta
Military junta
A junta or military junta is a government led by a committee of military leaders. The term derives from the Spanish language junta meaning committee, specifically a board of directors...
established to rule Chile
Chile
Chile ,officially the Republic of Chile , is a country in South America occupying a long, narrow coastal strip between the Andes mountains to the east and the Pacific Ocean to the west. It borders Peru to the north, Bolivia to the northeast, Argentina to the east, and the Drake Passage in the far...
during the military dictatorship that followed the overthrow of President Salvador Allende
Salvador Allende
Salvador Allende Gossens was a Chilean physician and politician who is generally considered the first democratically elected Marxist to become president of a country in Latin America....
in the 1973 Chilean coup d'état. It was the executive and legislative branch of government until December 17, 1974. After that date, it functioned strictly as a legislative body until the return to democracy in 1990.

On September 11, 1973, the day of the coup, the military officers issued an Act of Constitution. The act established a junta
Military dictatorship
A military dictatorship is a form of government where in the political power resides with the military. It is similar but not identical to a stratocracy, a state ruled directly by the military....
government that immediately suspended the constitution
Chilean Constitution of 1925
The Constitution of 1925 was the constitution in force in Chile between 1925 and 1973 when the Government Junta suspended it. In the 1920s Chile suffered from a severe social and economic crisis that led to the loss of prestige for old ruling class, labeled oligarchy in Chilean historiography, and...
, suspended Congress, imposed strict censorship and curfew
Curfew
A curfew is an order specifying a time after which certain regulations apply. Examples:# An order by a government for certain persons to return home daily before a certain time...
, proscribed the leftist
Left-wing politics
In politics, Left, left-wing and leftist generally refer to support for social change to create a more egalitarian society...
parties that had constituted Allende's Popular Unity
Popular Unity
Unidad Popular was a coalition of left wing, socialist and communist political parties in Chile that stood behind the successful candidacy of Salvador Allende for the 1970 Chilean presidential election....
coalition, and halted all political activity, effectively establishing a dictatorship
Dictatorship
A dictatorship is defined as an autocratic form of government in which the government is ruled by an individual, the dictator. It has three possible meanings:...
.

The new junta was made up of General Gustavo Leigh
Gustavo Leigh
Air General Gustavo Leigh Guzmán was a Chilean general, who represented the Air Force in the 1973 Chilean coup d'état and, for a time, in the ruling junta that followed. Leigh was forced out of the military government in 1978.-Biography:Leigh was born in Santiago, son of Hernán Leigh Bañados and...
representing the Air Force
Chilean Air Force
The Chilean Air Force is the air force of Chile, a branch of the Chilean military.-History:The first step towards the current FACh was taken by Teniente Coronel Pedro Pablo Dartnell, when he founded the Servicio de Aviación Militar de Chile on December 20, 1910, being trained as a pilot in France...
, General Augusto Pinochet
Augusto Pinochet
Augusto José Ramón Pinochet Ugarte, more commonly known as Augusto Pinochet , was a Chilean army general and dictator who assumed power in a coup d'état on 11 September 1973...
representing the Army
Chilean Army
The Chilean Army is the land arm of the Military of Chile. This 45,000-person army is organized into seven divisions, a special operations brigade and an air brigade....
, Admiral José Toribio Merino
José Toribio Merino
José Toribio Merino Castro was one of the principal coup leaders of the 1973 Chilean coup d'état, along with General Augusto Pinochet of the Army, General Gustavo Leigh of the Air Force, and General Mendoza of the "Carabineros"...
representing the Navy
Chilean Navy
-Independence Wars of Chile and Peru :The Chilean Navy dates back to 1817. A year before, following the Battle of Chacabuco, General Bernardo O'Higgins prophetically declared "this victory and another hundred shall be of no significance if we do not gain control of the sea".This led to the...
, and General César Mendoza
César Mendoza
General César Leonidas Mendoza Durán was a member of the Government Junta which ruled Chile from 1973 to 1990, representing the country-wide police force, the Carabineros de Chile....
representing the Carabineros
Carabineros de Chile
thumb|250px|Carabineros de Chile, patrolling a street in [[Santiago, Chile|Santiago]]The Carabiniers of Chile, are the uniformed Chilean national police force and gendarmerie, created on April 27, 1927. Their mission is to maintain order and create public respect for the laws of the country...
(uniformed police).

Once the Junta was in power, General Pinochet soon consolidated his control. Since he was the commander-in-chief of the oldest branch of the military forces (the Army), he was made the head of the military junta
Military junta
A junta or military junta is a government led by a committee of military leaders. The term derives from the Spanish language junta meaning committee, specifically a board of directors...
. This position was originally to be rotated among the four branches, but was later made permanent. He began by retaining sole chairmanship of the junta as Supreme Chief of the Nation from June 27, 1974 until December 17, 1974 when he was proclaimed President.

General Pinochet took over as President, following a national plesbicite
Chilean National Plebiscite, 1980
The National Plebiscite in 1980 in Chile was a referendum held on September 11, 1980 to approve the 1980 Political Constitution of the Republic of Chile as a replacement for Chile's 1925 constitution. The result was 4,204,897 votes in favor and 1,893,420 votes against ratification...
that approved a new constitution. On March 11, 1981, he resigned his position in the Junta, and was replaced by the most senior General officer from the Army, who was nominated by himself. After that date, the Junta remained only as a legislative body under the presidency of Admiral Merino
José Toribio Merino
José Toribio Merino Castro was one of the principal coup leaders of the 1973 Chilean coup d'état, along with General Augusto Pinochet of the Army, General Gustavo Leigh of the Air Force, and General Mendoza of the "Carabineros"...
, until the return to democracy in 1990.

Eventually, General Leigh, head of the Air Force, became increasingly opposed to Pinochet's policies and was forced into retirement on July 24, 1978, in a very tense moment that almost caused a military insurrection. He was replaced by General Fernando Matthei
Fernando Matthei
Fernando Matthei Aubel is a retired Chilean Air Force General that was part of the military junta that ruled Chile from 1973 to 1990, after Gustavo Leigh was dismissed in 1978. Before he became a junta member, Matthei was Minister of Health of the military government...
.

In 1985, three communists were found with their throats slit by the side of a road. The guilty party turned out to be the Carabineros' secret service, and the Caso Degollados ("case of the slit throats") caused General Mendoza's resignation on August 2, 1985, being replaced by General Rodolfo Stange
Rodolfo Stange
General Rodolfo Stange Oelckers is a Chilean politician and former senator. He was a member of the Government Junta that ruled Chile from 1973 to 1990, representing the police force . He was elected Senator in 1998, finishing his term in 2005.Stange was born in Puerto Montt, in the south of Chile...
.

Immediately after the coup
Chilean coup of 1973
The 1973 Chilean coup d'état was a watershed event of the Cold War and the history of Chile. Following an extended period of political unrest between the conservative-dominated Congress of Chile and the socialist-leaning President Salvador Allende, discontent culminated in the latter's downfall in...
the junta moved to crush their left-wing opposition. In addition to pursuing armed revolutionary groups it embarked on a campaign against opponents and perceived leftists in the country. As a result, according to the Rettig Commission
Rettig Report
The Rettig Report, officially The National Commission for Truth and Reconciliation Report, is a 1991 report by a commission designated by then President Patricio Aylwin encompassing human rights abuses resulting in death or disappearance that occurred in Chile during the years of military rule...
, approximately 3,000 people are known to have been killed, 27,000 were incarcerated and in a great many cases torture
Torture
Torture is the act of inflicting severe pain as a means of punishment, revenge, forcing information or a confession, or simply as an act of cruelty. Throughout history, torture has often been used as a method of political re-education, interrogation, punishment, and coercion...
d. Many were exile
Exile
Exile means to be away from one's home , while either being explicitly refused permission to return and/or being threatened with imprisonment or death upon return...
d and received abroad, in particular in Argentina
Argentina
Argentina , officially the Argentine Republic , is the second largest country in South America by land area, after Brazil. It is constituted as a federation of 23 provinces and an autonomous city, Buenos Aires...
, as political refugees; however, they were followed in their exile by the DINA secret police, in the frame of Operation Condor
Operation Condor
Operation Condor , was a campaign of political repression involving assassination and intelligence operations officially implemented in 1975 by the right-wing dictatorships of the Southern Cone of South America...
which linked South-American dictatorships together against political opponents.