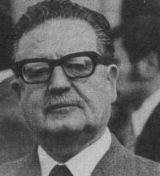 Overview
Salvador Allende Gossens (salβaˈðoɾ aˈʝende ˈɣosens; 26 July 1908 – 11 September 1973) was a Chilean
Chilean people
Chilean people, or simply Chileans, are the native citizens and long-term immigrants of Chile. Chileans are mainly of Spanish and Amerindian descent, with small but significant traces of 19th and 20th century European immigrant origin...
physician and politician who is generally considered the first democratically elected Marxist to become president of a country in Latin America
Latin America
Latin America is a region of the Americas where Romance languages  – particularly Spanish and Portuguese, and variably French – are primarily spoken. Latin America has an area of approximately 21,069,500 km² , almost 3.9% of the Earth's surface or 14.1% of its land surface area...
.

Allende's involvement in Chilean political life spanned a period of nearly forty years. As a member of the Socialist Party
Socialist Party of Chile
The Socialist Party of Chile is a political party, that is part of the center-left Coalition of Parties for Democracy coalition. Its historical leader was the late President of Chile Salvador Allende Gossens, who was deposed by General Pinochet in 1973...
, he was a senator
Senate of Chile
The Senate of the Republic of Chile is the upper house of Chile's bicameral National Congress, as established in the current Constitution of Chile.-Composition:...
, deputy
Chamber of Deputies of Chile
The Chamber of Deputies of the Republic of Chile is the lower house of Chile's bicameral Congress. Its organisation and its powers and duties are defined in articles 42 to 59 of Chile's current constitution....
and cabinet minister.

How many people died during Salvador Allende's ruling?
More

"The answer is the proletariat. If it wasn't so I wouldn't be here [...] As for the bourgeois state, at the present moment, we are seeking to overcome it. To overthrow it. [...] Our objective is total, scientific, Marxist socialism" &mdash; In an interview with French journalist Regis Debray in 1970.

"We already had success in creating a democratic, national government that is revolutionary and popular. That is how socialism begins, not with decrees." &mdash; Regis Debray interview.

(Attributed) "I am not the president of all the Chileans. I am not a hypocrite that says so." &mdash; At a public rally, quoted by all Chilean newspapers, January 17, 1971. President Allende sent a public letter to El Mercurio newspaper to deny this alleged statement.

"We start from different ideological positions. For you to be a Communist or a Socialist is to be totalitarian; for me no...On the contrary, I think Socialism frees man." &mdash; Quoted by the New York Times in 1970.