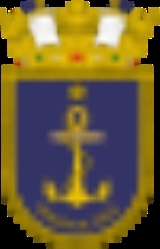 Overview
The Chilean Navy dates back to 1817. A year before, following the Battle of Chacabuco
Battle of Chacabuco
The Battle of Chacabuco, fought during the Chilean War of Independence, occurred on February 12, 1817. The Army of the Andes of the United Provinces of the Río de la Plata led by General Captain José de San Martín defeated the Spanish force led by Rafael Maroto...
, General Bernardo O'Higgins
Bernardo O'Higgins
Bernardo O'Higgins Riquelme was a Chilean independence leader who, together with José de San Martín, freed Chile from Spanish rule in the Chilean War of Independence. Although he was the second Supreme Director of Chile , he is considered one of Chile's founding fathers, as he was the first holder...
prophetically declared "this victory and another hundred shall be of no significance if we do not gain control of the sea".

This led to the development of the Chilean Navy, and the first legal resolutions outlining the organization of the institution were created. Chile's First National Fleet and the Academy for Young Midshipmen (predecessor of the current Naval Academy) were founded, as were the Marine Corps and the Supply Commissary.

The first commander of the Chilean Navy was Manuel Blanco Encalada
Manuel Blanco Encalada
Manuel José Blanco y Calvo de Encalada was a Vice-Admiral in the Chilean Navy, a political figure, and Chile's first President .-Biography:...
until Lord Cochrane
Thomas Cochrane, 10th Earl of Dundonald
Admiral Thomas Cochrane, 10th Earl of Dundonald, 1st Marquess of Maranhão, GCB, ODM , styled Lord Cochrane between 1778 and 1831, was a senior British naval flag officer and radical politician....
, formerly a Captain in the British navy, was hired by O'Higgins to be the commander of the Navy, who in turn hired an almost all-anglophone
English language
English is a West Germanic language that arose in the Anglo-Saxon kingdoms of England and spread into what was to become south-east Scotland under the influence of the Anglian medieval kingdom of Northumbria...
complement of officers and midshipmen, and crews of British, Irish and American seamen.

Can anyone please tell me if the ARC had a ship by the name of 'Rancagua' in service around 1956? I know this ship name goes right back to the great B...
More
x