Encyclopedia
The gizzard, also referred to as the ventriculus, gastric mill, and gigerium, is an organ
Organ (anatomy)
In biology, an organ is a collection of tissues joined in structural unit to serve a common function. Usually there is a main tissue and sporadic tissues . The main tissue is the one that is unique for the specific organ. For example, main tissue in the heart is the myocardium, while sporadic are...
found in the digestive tract of some animals, including bird
Bird
Birds are feathered, winged, bipedal, endothermic , egg-laying, vertebrate animals. Around 10,000 living species and 188 families makes them the most speciose class of tetrapod vertebrates. They inhabit ecosystems across the globe, from the Arctic to the Antarctic. Extant birds range in size from...
s, reptile
Reptile
Reptiles are members of a class of air-breathing, ectothermic vertebrates which are characterized by laying shelled eggs , and having skin covered in scales and/or scutes. They are tetrapods, either having four limbs or being descended from four-limbed ancestors...
s, earthworm
Earthworm
Earthworm is the common name for the largest members of Oligochaeta in the phylum Annelida. In classical systems they were placed in the order Opisthopora, on the basis of the male pores opening posterior to the female pores, even though the internal male segments are anterior to the female...
s and some fish
Fish
Fish are a paraphyletic group of organisms that consist of all gill-bearing aquatic vertebrate animals that lack limbs with digits. Included in this definition are the living hagfish, lampreys, and cartilaginous and bony fish, as well as various extinct related groups...
. This specialized stomach
Stomach
The stomach is a muscular, hollow, dilated part of the alimentary canal which functions as an important organ of the digestive tract in some animals, including vertebrates, echinoderms, insects , and molluscs. It is involved in the second phase of digestion, following mastication .The stomach is...
constructed of thick, muscular walls is used for grinding up food; often rocks are instrumental in this process. In certain insects and mollusks, the gizzard features chitin
Chitin
Chitin n is a long-chain polymer of a N-acetylglucosamine, a derivative of glucose, and is found in many places throughout the natural world...
ous plates or teeth. 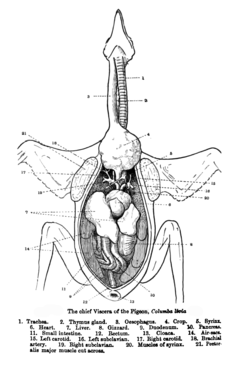 Birds swallow food and store it in their crop
Crop (anatomy)
A crop is a thin-walled expanded portion of the alimentary tract used for the storage of food prior to digestion that is found in many animals, including gastropods, earthworms, leeches, insects, birds, and even some dinosaurs.- Bees :Cropping is used by bees to temporarily store nectar of flowers...
if necessary. Then the food passes into their glandular stomach, also called the proventriculus
Proventriculus
The proventriculus is part of the digestive system of birds, invertebrates and insects.-Birds:The proventriculus is a standard part of avian anatomy...
, which is also sometimes referred to as the true stomach. This is the secretory part of the stomach. Then the food passes into the ventriculus (also known as the muscular stomach or gizzard). The gizzard can grind the food with previously-swallowed stones and pass it back to the true stomach, and vice versa. Bird gizzards are lined with a tough layer made of the carbohydrate-protein complex koilin, to protect the muscles in the gizzard and to aid in digestion.

Some animals that lack teeth will swallow stones or grit to aid in digestion. All birds have gizzards, but not all will swallow stones or grit. The birds that do, employ the following method of mastication
Mastication
Mastication or chewing is the process by which food is crushed and ground by teeth. It is the first step of digestion and it increases the surface area of foods to allow more efficient break down by enzymes. During the mastication process, the food is positioned between the teeth for grinding by...
:

"A bird swallows small bits of gravel that act as 'teeth' in the gizzard, breaking down hard food such as seeds and thus helping digestion." (Solomon et al., 2002).


These stones are called gizzard stones or gastrolith
Gastrolith
A gastrolith, also called a stomach stone or gizzard stones, is a rock held inside a gastrointestinal tract. Gastroliths are retained in the muscular gizzard and used to grind food in animals lacking suitable grinding teeth. The grain size depends upon the size of the animal and the gastrolith's...
s and are usually round and smooth from the polishing action in the animal's stomach. When too smooth to do their required work, they may be passed or regurgitated.

All birds have gizzards. The gizzards of emus, turkeys, chickens and ducks are most notable in cuisine (see below).

The mullet (Mugilidae) found in estuarine
Estuary
An estuary is a partly enclosed coastal body of water with one or more rivers or streams flowing into it, and with a free connection to the open sea....
waters worldwide, and the gizzard or mud shad
Shad
The shads or river herrings comprise the genus Alosa, fish related to herring in the family Clupeidae. They are distinct from others in that family by having a deeper body and spawning in rivers. The several species frequent different areas on both sides of the Atlantic Ocean, Mediterranean Sea....
, found in freshwater lakes and streams from New York to Mexico, have gizzards.
The gillaroo
Gillaroo
Gillaroo , is the name of a species of trout which eats primarily snails and is only proven to inhabit Lough Melvin in Ireland.Gillaroo is derived from the Irish for Red Fellow ; this is due to the fish's distinctive colouring. It has a bright, buttery golden colour in its flanks with bright...
(Salmo stomachius), a richly colored species of trout
Trout
Trout is the name for a number of species of freshwater and saltwater fish belonging to the Salmoninae subfamily of the family Salmonidae. Salmon belong to the same family as trout. Most salmon species spend almost all their lives in salt water...
found in the Irish lake, lough Melvin
Lough Melvin
Lough Melvin is a lake which is internationally renowned for its unique range of plants and animals. It is located in the northwest of Ireland on the border between County Leitrim and County Fermanagh ....
in County Fermanagh
County Fermanagh
Fermanagh District Council is the only one of the 26 district councils in Northern Ireland that contains all of the county it is named after. The district council also contains a small section of County Tyrone in the Dromore and Kilskeery road areas....
, has a gizzard which is used to aid the digestion of water snails, the main component of its diet.

Most invertebrates also have gizzards. The gizzard is used to grind up food, and it is part of the digestive system.

Dinosaur
Dinosaur
Dinosaurs are a diverse group of animals of the clade and superorder Dinosauria. They were the dominant terrestrial vertebrates for over 160 million years, from the late Triassic period until the end of the Cretaceous , when the Cretaceous–Paleogene extinction event led to the extinction of...
s which are believed to have had gizzards based on the discovery of gizzard stones recovered near fossils include:
Claosaurus
Claosaurus
Claosaurus is a genus of primitive hadrosaurid that lived during the Late Cretaceous Period .Evidence of its existence was first found near the Smoky Hill River in Kansas, USA in the form of partial skull fragments and as an articulated postcranial skeleton...
had been believed to have a gizzard, but this was A) Edmontosaurus annectens and B) probably based on stream-washed gravel; see Creisler, Benjamin S. 2007. Deciphering duckbills. Page 199 in Carpenter, Kenneth (ed.). Horns and Beaks: Ceratopsian and Ornithopod Dinosaurs. Indiana University Press: Bloomington and Indianapolis.

The word "Sangdana" is commonly used to refer to chicken gizzards in Pakistan. The word is derived from Persian (Sang = stone and dana = grain). It may be served cooked in a curry while barbecued skewered gizzards are also popular.

In Yiddish, gizzards are referred to as "pipik'lach", literally meaning navel
Navel
The navel is a scar on the abdomen caused when the umbilical cord is removed from a newborn baby...
s. The gizzards of kosher species of birds have a green or yellowish membrane lining the inside, which must be peeled off before cooking, as it lends a very bitter taste to the food. In traditional Eastern European Jewish cuisine
Jewish cuisine
Jewish Cuisine is a collection of the different cooking traditions of the Jewish people worldwide. It is a diverse cuisine that has evolved over many centuries, shaped by Jewish dietary laws and Jewish Festival and Sabbath traditions...
, the gizzards, necks, and feet of chickens were often cooked together, although not the liver
Liver
The liver is a vital organ present in vertebrates and some other animals. It has a wide range of functions, including detoxification, protein synthesis, and production of biochemicals necessary for digestion...
, which per Kosher law must be broiled. Kosher butchers often sell roasting chickens with the gizzard, neck, and feet butchered and left in the cavity to be used for making chicken soup
Chicken soup
Chicken soup is a soup made by bringing to a boil and then simmering chicken parts and/or bones in water, with various vegetables and flavorings. The classic chicken soup consists of a clear broth, often served with small pieces of chicken or vegetables, or with noodles or dumplings, or grains such...
.

In Uganda
Uganda
Uganda , officially the Republic of Uganda, is a landlocked country in East Africa. Uganda is also known as the "Pearl of Africa". It is bordered on the east by Kenya, on the north by South Sudan, on the west by the Democratic Republic of the Congo, on the southwest by Rwanda, and on the south by...
, Cameroon
Cameroon
Cameroon, officially the Republic of Cameroon , is a country in west Central Africa. It is bordered by Nigeria to the west; Chad to the northeast; the Central African Republic to the east; and Equatorial Guinea, Gabon, and the Republic of the Congo to the south. Cameroon's coastline lies on the...
and Nigeria
Nigeria
Nigeria , officially the Federal Republic of Nigeria, is a federal constitutional republic comprising 36 states and its Federal Capital Territory, Abuja. The country is located in West Africa and shares land borders with the Republic of Benin in the west, Chad and Cameroon in the east, and Niger in...
, the gizzard of a cooked chicken is traditionally set aside for the oldest or most respected male at the table.

Giblets
Giblets
Giblets is a culinary term for the edible offal of a fowl, typically including the heart, gizzard, liver, and other visceral organs.A whole bird from a butcher is often packaged with the giblets...
consist of the heart, liver and gizzard of a bird, and are often eaten themselves or used as the basis for a soup or stock.

In Taiwan, gizzards are often slow-cooked and served hot or cold in slices, with green onions and soy sauce.

In Mainland China, duck gizzard is a common snack, eaten alongside other duck parts such as feet, neck, heart, tongue, or head. Areas famous for their gizzard are Sichuan
Sichuan
' , known formerly in the West by its postal map spellings of Szechwan or Szechuan is a province in Southwest China with its capital in Chengdu...
and Hubei
Hubei
' Hupeh) is a province in Central China. The name of the province means "north of the lake", referring to its position north of Lake Dongting...
provinces. Wuhan
Wuhan
Wuhan is the capital of Hubei province, People's Republic of China, and is the most populous city in Central China. It lies at the east of the Jianghan Plain, and the intersection of the middle reaches of the Yangtze and Han rivers...
city in Hubei is famous for its spicy gizzard, called Jiujiuya (Simplified Chinese:久久鸭). In Northern China, you can find BBQ duck gizzard.