The Drancy internment camp of Paris
Paris
Paris is the capital and largest city in France, situated on the river Seine, in northern France, at the heart of the Île-de-France region...
, France
France
The French Republic , The French Republic , The French Republic , (commonly known as France , is a unitary semi-presidential republic in Western Europe with several overseas territories and islands located on other continents and in the Indian, Pacific, and Atlantic oceans. Metropolitan France...
, was used to hold Jews
Jews
The Jews , also known as the Jewish people, are a nation and ethnoreligious group originating in the Israelites or Hebrews of the Ancient Near East. The Jewish ethnicity, nationality, and religion are strongly interrelated, as Judaism is the traditional faith of the Jewish nation...
who were later deported to the extermination camps. 65,000 Jews were deported from Drancy, of whom 63,000 were murdered including 6,000 children. Only 2,000 remained alive when Allied forces liberated the camp on 17 August 1944.

Drancy was under the control of the French police until 1943 when administration was taken over by SS and officer Alois Brunner
Alois Brunner
Alois Brunner is an Austrian Nazi war criminal. Brunner was Adolf Eichmann's assistant, and Eichmann referred to Brunner as his "best man." As commander of the Drancy internment camp outside Paris from June 1943 to August 1944, Brunner is held responsible for sending some 140,000 European Jews to...
. In 2001, Brunner's case was brought before a French court by Nazi hunter
Nazi hunter
A Nazi-hunter is a private individual who tracks down and gathers information on alleged former Nazis, SS members and Nazi collaborators involved in the Holocaust, typically for use at trial on charges of war crimes and crimes against humanity...
Serge Klarsfeld, which sentenced Brunner in absentia to a life sentence for crimes against humanity.

After the 1940 defeat by Germany
Battle of France
In the Second World War, the Battle of France was the German invasion of France and the Low Countries, beginning on 10 May 1940, which ended the Phoney War. The battle consisted of two main operations. In the first, Fall Gelb , German armoured units pushed through the Ardennes, to cut off and...
and the 10 July 1940 vote of full powers to Marshal Philippe Pétain
Philippe Pétain
Henri Philippe Benoni Omer Joseph Pétain , generally known as Philippe Pétain or Marshal Pétain , was a French general who reached the distinction of Marshal of France, and was later Chief of State of Vichy France , from 1940 to 1944...
, the Republic
French Third Republic
The French Third Republic was the republican government of France from 1870, when the Second French Empire collapsed due to the French defeat in the Franco-Prussian War, to 1940, when France was overrun by Nazi Germany during World War II, resulting in the German and Italian occupations of France...
was abolished and Vichy France
Vichy France
Vichy France, Vichy Regime, or Vichy Government, are common terms used to describe the government of France that collaborated with the Axis powers from July 1940 to August 1944. This government succeeded the Third Republic and preceded the Provisional Government of the French Republic...
was proclaimed. The Vichy government cooperated with Nazi Germany
Nazi Germany
Nazi Germany , also known as the Third Reich , but officially called German Reich from 1933 to 1943 and Greater German Reich from 26 June 1943 onward, is the name commonly used to refer to the state of Germany from 1933 to 1945, when it was a totalitarian dictatorship ruled by...
, hunting down foreign and French Jews and turning them over to the Gestapo
Gestapo
The Gestapo was the official secret police of Nazi Germany. Beginning on 20 April 1934, it was under the administration of the SS leader Heinrich Himmler in his position as Chief of German Police...
for transport to the Third Reich's extermination camps.

The Drancy internment camp became identified by the northeastern suburb of Paris in which it was located. It was originally conceived by the noted architects Marcel Lods and Eugène Beaudouinas as a striking, modernist
Modern architecture
Modern architecture is generally characterized by simplification of form and creation of ornament from the structure and theme of the building. It is a term applied to an overarching movement, with its exact definition and scope varying widely...
urban community. The design was especially noteworthy for its integration of high-rise residential apartment towers, among the first of their kind in France. Poetically named La Cité de la Muette ("The Silent City") at its creation for its perceived peaceful ideals, the name became twisted with bitter ironic meaning. The entire complex was confiscated by Nazi authorities not long after the German occupation of France in 1940. It was used first as police barracks, then converted into the primary detention center in the Paris region for holding Jews and other people labeled as "undesirable" before deportation.

On 20 August 1941, French police conducted raids throughout the 11th District of Paris and arrested more than 4,000 Jews, mainly foreign or stateless Jews. French authorities interned these Jews in Drancy, marking its official opening. French police enclosed the barracks and courtyard with barbed-wire fencing and provided guards for the camp. Drancy fell under the command of the Gestapo Office of Jewish Affairs in France and German SS Captain Theodor Dannecker
Theodor Dannecker
Theodor Dannecker was an SS Hauptsturmführer and one of Adolf Eichmann's associates....
. Five subcamps of Drancy were located throughout Paris (three of which were the Austerlitz, Lévitan and Bassano camps). Following the Vel' d'Hiv Roundup on July 16 and 17, 1942, more than 4,900 of the 13,152 victims of the mass arrest were sent directly to the camp at Drancy before their deportation to Auschwitz. 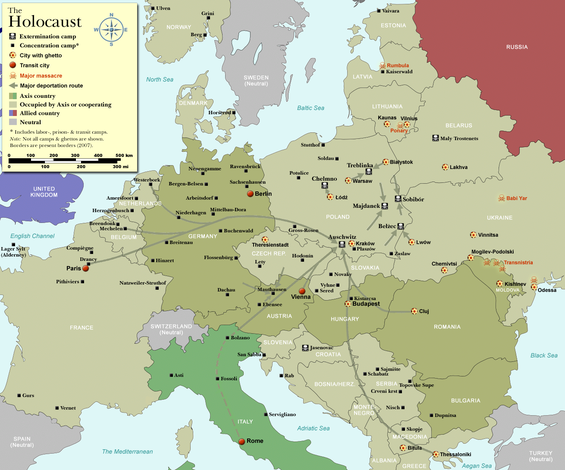 Drancy was under the control of the French police until 3 July 1943 when Germany took direct control of the Drancy camp. SS officer Alois Brunner
Alois Brunner
Alois Brunner is an Austrian Nazi war criminal. Brunner was Adolf Eichmann's assistant, and Eichmann referred to Brunner as his "best man." As commander of the Drancy internment camp outside Paris from June 1943 to August 1944, Brunner is held responsible for sending some 140,000 European Jews to...
became camp commandant as part of the major stepping up at all facilities needed for mass extermination. The French police carried out additional roundups of Jews throughout the war. Some Drancy inmates died as hostage pawns. In December 1941, 40 prisoners from Drancy were executed in retaliation for a French attack on German police officers.

The Drancy camp was designed to hold 700 people, but at its peak held more than 7,000. There is documented evidence and testimony recounting the brutality of the French guards in Drancy and the harsh conditions imposed on the inmates. For example, upon their arrival, small children were immediately separated from their parents for deportation to the death camps.

On 6 April 1944, SS First Lieutenant Klaus Barbie
Klaus Barbie
Nikolaus 'Klaus' Barbie was an SS-Hauptsturmführer , Gestapo member and war criminal. He was known as the Butcher of Lyon.- Early life :...
raided a children's home in Izieu
Izieu
Izieu is a commune in the Ain department in eastern France.It lies on the Rhône River between the cities of Lyon and Chambéry.-History:Izieu was the site of a Jewish orphanage during the Second World War. Most of the children were however only separated from their parents or sent purposely in the...
, France, where Jewish children had been hidden. Barbie arrested everyone present, all 44 children and 7 adult staff members. The next day, the Gestapo transported the arrestees to Drancy. From there, all the children and staff were deported to Auschwitz. None of them survived.

Many French Jewish intellectuals and artists were held in Drancy, including Max Jacob
Max Jacob
Max Jacob was a French poet, painter, writer, and critic.-Life and career:After spending his childhood in Quimper, Brittany, France, he enrolled in the Paris Colonial School, which he left in 1897 for an artistic career...
(who died there), Tristan Bernard
Tristan Bernard
Tristan Bernard was a French playwright, novelist, journalist and lawyer.-Life:Born Paul Bernard into a Jewish family in Besançon, Doubs, Franche-Comté, France, he was the son of an architect...
, and the choreographer René Blum. Of the 75,000 Jews whom French and German authorities deported from France, over 65,000 were sent directly from Drancy to Auschwitz. Only 2,000 survived their captivity.

In 1976, the Memorial to the Deportation at Drancy was created by sculptor Shlomo Selinger
Shlomo Selinger
Shelomo Selinger is an Israeli sculptor who was born in Jaworzno in Poland and immigrated to Israel in 1945. From 1955 to 1958, he studied at the École nationale supérieure des Beaux-Arts in Paris.His sculptures in public places include:...
to commemorate the French Jews imprisoned in the camp.

Until recently, the official point of view of the French government was that the Vichy regime was an illegal government distinct from the French Republic. While the criminal behaviour of Vichy France and the collaboration of French officials were acknowledged, and some former Vichy officials prosecuted, this point of view denied any responsibility of the French Republic. This perspective, held by Charles de Gaulle
Charles de Gaulle
Charles André Joseph Marie de Gaulle was a French general and statesman who led the Free French Forces during World War II. He later founded the French Fifth Republic in 1958 and served as its first President from 1959 to 1969....
among others, underlined in particular the circumstances of the July 1940 vote of the full powers to Marshal Pétain
Philippe Pétain
Henri Philippe Benoni Omer Joseph Pétain , generally known as Philippe Pétain or Marshal Pétain , was a French general who reached the distinction of Marshal of France, and was later Chief of State of Vichy France , from 1940 to 1944...
, who installed the "French State
French state
The French state may refer to:*The Republic of France *Vichy France, 'French state' was the official name of the regime first directed by Philippe Pétain, explicitly opposed to the French Republic...
" and repudiated the Republic. With only the Vichy 80 refusing this vote, historians have argued it was anti-Constitutional, most notably because of pressure on parliamentarians from Pierre Laval
Pierre Laval
Pierre Laval was a French politician. He was four times President of the council of ministers of the Third Republic, twice consecutively. Following France's Armistice with Germany in 1940, he served twice in the Vichy Regime as head of government, signing orders permitting the deportation of...
.

However, on 16 July 1995, president Jacques Chirac
Jacques Chirac
Jacques René Chirac is a French politician who served as President of France from 1995 to 2007. He previously served as Prime Minister of France from 1974 to 1976 and from 1986 to 1988 , and as Mayor of Paris from 1977 to 1995.After completing his studies of the DEA's degree at the...
, in a speech, recognized the responsibility of the French State, and in particular of the French police which organized the Vel' d'Hiv Roundup (Rafle du Vel' d'Hiv) of July 1942 , for seconding the "criminal folly of the occupying country".

On 20 January 2005, arsonists set fire to some railroad freight cars in the former camp; a tract signed "Bin Laden" with an inverted swastika
Swastika
The swastika is an equilateral cross with its arms bent at right angles, in either right-facing form in counter clock motion or its mirrored left-facing form in clock motion. Earliest archaeological evidence of swastika-shaped ornaments dates back to the Indus Valley Civilization of Ancient...
was found on the place.

On 11 April 2009, a swastika
Swastika
The swastika is an equilateral cross with its arms bent at right angles, in either right-facing form in counter clock motion or its mirrored left-facing form in clock motion. Earliest archaeological evidence of swastika-shaped ornaments dates back to the Indus Valley Civilization of Ancient...
was painted on the train car used for the deportation of Jews, a permanent exhibit. This action was condemned by the French Minister for the Interior, Michèle Alliot-Marie
Michèle Alliot-Marie
Michèle Jeanne Honorine Alliot-Marie, born 10 September 1946 and nicknamed MAM, is a French politician of the Union for a Popular Movement . A member of all but one right-wing governments of the 1980s, 1990s and 2000s, she was the first woman in France to hold the portfolios of Defense , the...
.