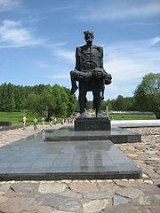 Encyclopedia
Khatyn, Chatyń was a village in Belarus
Belarus
Belarus , officially the Republic of Belarus, is a landlocked country in Eastern Europe, bordered clockwise by Russia to the northeast, Ukraine to the south, Poland to the west, and Lithuania and Latvia to the northwest. Its capital is Minsk; other major cities include Brest, Grodno , Gomel ,...
, in Lahojsk
Lahojsk
Lahojsk is a city in the Minsk Province of Belarus, an administrative center of the Lahojsk district. This city has a ski resort named Silichy.-External links:* * *...
district, Minsk Voblast. On March 22, 1943, the population of the village was massacre
Massacre
A massacre is an event with a heavy death toll.Massacre may also refer to:-Entertainment:*Massacre , a DC Comics villain*Massacre , a 1932 drama film starring Richard Barthelmess*Massacre, a 1956 Western starring Dane Clark...
d during World War II
World War II
World War II, or the Second World War , was a global conflict lasting from 1939 to 1945, involving most of the world's nations—including all of the great powers—eventually forming two opposing military alliances: the Allies and the Axis...
by the 118th Schutzmannschaft
Schutzmannschaft
Schutzmannschaft or Hilfspolizei were the collaborationist auxiliary police battalions of native policemen in occupied countries in East, which were created to fight the resistance during World War II mostly in the Eastern European countries occupied by Nazi Germany. Hilfspolizei refers also to...
battalion, formed in July 1942 in Kiev, mostly from Ukrainian
Ukraine
Ukraine is a country in Eastern Europe. It has an area of 603,628 km², making it the second largest contiguous country on the European continent, after Russia...
collaborators, prisoners of war and deserters and Special SS battalion "Dirlewanger".

On 22 March 1943, a Nazi motor convoy was attacked by partisan guerillas near Koziri village just 6 km away from Khatyn, resulting in the deaths of four military police officers of 118th Schutzmannschaft
Schutzmannschaft
Schutzmannschaft or Hilfspolizei were the collaborationist auxiliary police battalions of native policemen in occupied countries in East, which were created to fight the resistance during World War II mostly in the Eastern European countries occupied by Nazi Germany. Hilfspolizei refers also to...
battalion, a police battalion made up chiefly of Ukrainian collaborators, prisoners of war and deserters. Among the dead was 1936 Olympic Games champion Hauptmann Hans Woellke, the battalion's commanding officer.

That afternoon, the 118th Schutzmannschaft battalion, reinforced by troops from the 36th Waffen Grenadier Division of the SS, or Dirlewanger Brigade, a unit mostly composed of criminals recruited for anti-partisan duties, entered the village and drove the inhabitants from their houses and into a shed, which was then covered with straw and set on fire. The trapped people managed to break down the front doors, but in trying to escape, were killed by machine gun fire. 149 people, including 75 children, were killed. The village was then looted and burned to the ground.

Viktor Zhelobkovich, a seven-year-old boy, survived the fire in the shed under the corpse of his mother. Another boy, 12-year-old Anton Baranovsky, was left for dead due to a leg wound. The only adult survivor of the Khatyn massacre, 56-year-old village smith Yuzif Kaminsky, also wounded and burnt, recovered consciousness after the Nazis had left. He supposedly found his burned son who later died in his arms. This incident was later artistically honored in the form of a statue at the Khatyn Memorial.

At least 5,295 Belarusian settlements were destroyed by the Nazis and some or all their inhabitants killed. In the Vitebsk
Vitebsk
Vitebsk, also known as Viciebsk or Vitsyebsk , is a city in Belarus, near the border with Russia. The capital of the Vitebsk Oblast, in 2004 it had 342,381 inhabitants, making it the country's fourth largest city...
region 243 villages were burned down twice, 83 villages three times, and 22 villages were burned down four or more times. In the Minsk
Minsk
- Ecological situation :The ecological situation is monitored by Republican Center of Radioactive and Environmental Control .During 2003–2008 the overall weight of contaminants increased from 186,000 to 247,400 tons. The change of gas as industrial fuel to mazut for financial reasons has worsened...
region 92 villages were burned down twice, 40 villages three times, nine villages four times, and six villages five or more times. Altogether, 2,230,000 people were killed in Belarus during the three years of Nazi occupation, about a quarter of the country's population.

The commander of one of the platoons of 118th Schutzmannschaft Battalion, Ukrainian Vasyl Meleshko, was tried in a Soviet court and executed in 1975.
Chief of Staff of 118th Schutzmannschaft Battalion, Ukrainian Grigory Vassiura, was tried in Minsk in 1986, was found guilty of all his crimes and by the verdict of the military tribunal of the Belorussian military district was sentenced to death.
The case and the trial of the main executioner of Khatyn was not given much publicity in the media; the leaders of the Soviet republics worried about the inviolability of international unity between the Belarusian and Ukrainian people.

In the Brezhnev
Leonid Brezhnev
Leonid Ilyich Brezhnev  – 10 November 1982) was the General Secretary of the Central Committee of the Communist Party of the Soviet Union , presiding over the country from 1964 until his death in 1982. His eighteen-year term as General Secretary was second only to that of Joseph Stalin in...
era USSR, much attention was paid to this Nazi crime, possibly with the intention of diverting attention from the Katyn massacre
Katyn massacre
The Katyn massacre, also known as the Katyn Forest massacre , was a mass execution of Polish nationals carried out by the People's Commissariat for Internal Affairs , the Soviet secret police, in April and May 1940. The massacre was prompted by Lavrentiy Beria's proposal to execute all members of...
of Polish officers. According to Norman Davies
Norman Davies
Professor Ivor Norman Richard Davies FBA, FRHistS is a leading English historian of Welsh descent, noted for his publications on the history of Europe, Poland, and the United Kingdom.- Academic career :...
, of Wolfson College, Oxford
Wolfson College, Oxford
Wolfson College is a constituent college of the University of Oxford in England. Located in north Oxford along the River Cherwell, Wolfson is an all-graduate college with over sixty governing body fellows, in addition to both research and junior research fellows. It caters to a wide range of...
, the village was chosen and the memorial created by the Soviet authorities in a calculated policy of disinformation.

Khatyn became a symbol of mass killings of the civilian population during the fighting between partisan
Partisan (military)
A partisan is a member of an irregular military force formed to oppose control of an area by a foreign power or by an army of occupation by some kind of insurgent activity...
s, German troops, and collaborators. In 1969 it was named the national war memorial
War memorial
A war memorial is a building, monument, statue or other edifice to celebrate a war or victory, or to commemorate those who died or were injured in war.-Historic usage:...
of the Byelorussian SSR
Byelorussian SSR
The Byelorussian Soviet Socialist Republic was one of fifteen constituent republics of the Soviet Union. It was one of the four original founding members of the Soviet Union in 1922, together with the Ukrainian SSR, the Transcaucasian SFSR and the Russian Soviet Federative Socialist Republic...
. Among the best-recognized symbols of the memorial complex is a monument with three birch
Birch
Birch is a tree or shrub of the genus Betula , in the family Betulaceae, closely related to the beech/oak family, Fagaceae. The Betula genus contains 30–60 known taxa...
trees, with an eternal flame
Eternal flame
An eternal flame is a flame or torch that burns day and night for an indefinite period. The flame that burned constantly at Delphi was an archaic feature, "alien to the ordinary Greek temple"....
instead of a fourth tree, a tribute to the one in every four Belarusians
Belarusians
Belarusians ; are an East Slavic ethnic group who populate the majority of the Republic of Belarus. Introduced to the world as a new state in the early 1990s, the Republic of Belarus brought with it the notion of a re-emerging Belarusian ethnicity, drawn upon the lines of the Old Belarusian...
who died in the war. There is also a statue of Yuzif Kaminsky carrying his dying son, and a wall with niches to represent the victims of all concentration camps, with large niches representing those with more than 20,000 victims. Bells ring every 30 seconds to commemorate the rate at which Belarusian lives were lost throughout the duration of the Second World War.

Among the foreign leaders who have visited the Khatyn Memorial during their time in office are Richard Nixon
Richard Nixon
Richard Milhous Nixon was the 37th President of the United States, serving from 1969 to 1974. The only president to resign the office, Nixon had previously served as a US representative and senator from California and as the 36th Vice President of the United States from 1953 to 1961 under...
of the USA, Fidel Castro
Fidel Castro
Fidel Alejandro Castro Ruz is a Cuban revolutionary and politician, having held the position of Prime Minister of Cuba from 1959 to 1976, and then President from 1976 to 2008. He also served as the First Secretary of the Communist Party of Cuba from the party's foundation in 1961 until 2011...
of Cuba
Cuba
The Republic of Cuba is an island nation in the Caribbean. The nation of Cuba consists of the main island of Cuba, the Isla de la Juventud, and several archipelagos. Havana is the largest city in Cuba and the country's capital. Santiago de Cuba is the second largest city...
, Rajiv Gandhi
Rajiv Gandhi
Rajiv Ratna Gandhi was the sixth Prime Minister of India . He took office after his mother's assassination on 31 October 1984; he himself was assassinated on 21 May 1991. He became the youngest Prime Minister of India when he took office at the age of 40.Rajiv Gandhi was the elder son of Indira...
of India
India
India , officially the Republic of India , is a country in South Asia. It is the seventh-largest country by geographical area, the second-most populous country with over 1.2 billion people, and the most populous democracy in the world...
, Yasser Arafat
Yasser Arafat
Mohammed Yasser Abdel Rahman Abdel Raouf Arafat al-Qudwa al-Husseini , popularly known as Yasser Arafat or by his kunya Abu Ammar , was a Palestinian leader and a Laureate of the Nobel Prize. He was Chairman of the Palestine Liberation Organization , President of the Palestinian National Authority...
of the PLO
Palestine Liberation Organization
The Palestine Liberation Organization is a political and paramilitary organization which was created in 1964. It is recognized as the "sole legitimate representative of the Palestinian people" by the United Nations and over 100 states with which it holds diplomatic relations, and has enjoyed...
, and Jiang Zemin
Jiang Zemin
Jiang Zemin is a former Chinese politician, who served as General Secretary of the Communist Party of China from 1989 to 2002, as President of the People's Republic of China from 1993 to 2003, and as Chairman of the Central Military Commission from 1989 to 2005...
of China
China
Chinese civilization may refer to:* China for more general discussion of the country.* Chinese culture* Greater China, the transnational community of ethnic Chinese.* History of China* Sinosphere, the area historically affected by Chinese culture...
.