Encyclopedia
Pinsk a town in Belarus
Belarus
Belarus , officially the Republic of Belarus, is a landlocked country in Eastern Europe, bordered clockwise by Russia to the northeast, Ukraine to the south, Poland to the west, and Lithuania and Latvia to the northwest. Its capital is Minsk; other major cities include Brest, Grodno , Gomel ,...
, in the Polesia
Polesia
Polesia is one of the largest European swampy areas, located in the south-western part of the Eastern-European Lowland, mainly within Belarus and Ukraine but also partly within Poland and Russia...
region, traversed by the river Pripyat
Pripyat River
The Pripyat River or Prypiat River is a river in Eastern Europe, approximately long. It flows east through Ukraine, Belarus, and Ukraine again, draining into the Dnieper....
, at the confluence of the Strumen and Pina
Pina
Pina may refer to:* Eben Mazuh Habonim Haita le Rosh Pina* Rosh Pina* 6521 Pina, a main-belt asteroid* Pina Records, a Puerto Rican record label* Pina , a film directed by Wim WendersPeople with the given name Pina:...
rivers. The region was known as the Marsh of Pinsk
Pinsk Marshes
The Pinsk Marshes or Pripyat Marshes are a vast territory of wetlands along the Pripyat River and its tributaries from Brest, Belarus to Mogilev and Kiev ....
. It is a fertile agricultural center. It lies south-west of Minsk
Minsk
- Ecological situation :The ecological situation is monitored by Republican Center of Radioactive and Environmental Control .During 2003–2008 the overall weight of contaminants increased from 186,000 to 247,400 tons. The change of gas as industrial fuel to mazut for financial reasons has worsened...
. The population is about 130,000. The city is a small industrial center producing ships sailing the local rivers.

The historic city has a beautifully restored downtown full of two-story buildings dating from the 19th century and the beginning of the 20th century.

Pinsk is first mentioned in the chronicles of 1097 as Pinesk, a town belonging to Sviatopolk
Sviatopolk II of Kiev
Sviatopolk II Iziaslavich was supreme ruler of the Kievan Rus for 20 years, from 1093 to 1113. He was not a popular prince, and his reign was marked by incessant rivalry with his cousin Vladimir Monomakh...
of Turau
Principality of Turov and Pinsk
The Duchy of Turov and Pinsk was a medieval principality and state on the territory of modern southern Belarus and northern Ukraine. The principality's capital was Turov or Pinsk, other important cities were Mazyr and Slutsk, Lutsk, Brest, and Volodymyr-Volynskyi...
. The name is derived from the river Pina. Pinsk's early history is closely linked with the history of Turau
Turau
Turaŭ or Turaw is a town in the Zhytkavichy Raion of Homiel Province of Belarus and the former capital of the medieval Principality of Turov and Pinsk.-History:...
. Until the mid-12th century Pinsk was the seat of Sviatopolk's descendants, but a cadet line of the same family established their own seat at Pinsk after the Mongol invasion of Rus
Mongol invasion of Rus
The Mongol invasion of Russia was resumed on 21 December 1237 marking the resumption of the Mongol invasion of Europe, during which the Mongols attacked the medieval powers of Poland, Kiev, Hungary, and miscellaneous tribes of less organized peoples...
in 1239.

The Pinsk principality had an important strategic location, between the principalities of Navahrudak and Halych-Volynia, which fought each other for other Ruthenian territories. Pinsk did not take part in this struggle, although it was inclined towards the princes of Novaharodak, which is shown by the fact that the future prince of Novaharodak and Voyshalk
Vaišvilkas
Vaišelga or Vaišvilkas was the Grand Duke of Lithuania...
of Lithuania spent some time in Pinsk.

In 1320 Pinsk was won by the rulers of Navahrudak, who incorporated it into their state, known as the Grand Duchy of Lithuania
Grand Duchy of Lithuania
The Grand Duchy of Lithuania was a European state from the 12th /13th century until 1569 and then as a constituent part of Polish-Lithuanian Commonwealth until 1791 when Constitution of May 3, 1791 abolished it in favor of unitary state. It was founded by the Lithuanians, one of the polytheistic...
. From this time on Pinsk was ruled by Gedimin's eldest son, Narymunt
Narymunt
Narimantas or Narymunt was the second eldest son of Gediminas, Grand Duke of Lithuania. During various periods of his life, he ruled Pinsk and Polatsk. In 1333 he was invited by Novgorod's nobles to rule and protect territories in the north, Ladoga, Oreshek and Korela...
. Afterwards, for the next two centuries the city had different rulers.

In 1581 Pinsk was granted the Magdeburg rights
Magdeburg rights
Magdeburg Rights or Magdeburg Law were a set of German town laws regulating the degree of internal autonomy within cities and villages granted by a local ruler. Modelled and named after the laws of the German city of Magdeburg and developed during many centuries of the Holy Roman Empire, it was...
and in 1569, after the union of Lithuania
Grand Duchy of Lithuania
The Grand Duchy of Lithuania was a European state from the 12th /13th century until 1569 and then as a constituent part of Polish-Lithuanian Commonwealth until 1791 when Constitution of May 3, 1791 abolished it in favor of unitary state. It was founded by the Lithuanians, one of the polytheistic...
with the Crown of the Polish Kingdom
Crown of the Polish Kingdom
The Crown of the Kingdom of Poland , or simply the Crown , is the name for the unit of administrative division, the territories under direct administration of Polish nobility from middle-ages to late 18th century...
, it became the seat of the province of Brest
Brest, Belarus
Brest , formerly also Brest-on-the-Bug and Brest-Litovsk , is a city in Belarus at the border with Poland opposite the city of Terespol, where the Bug River and Mukhavets rivers meet...
.

From 1633 on Pinsk had a secondary school, a so-called brotherhood school (the brotherhoods were religious citizens' organisations with the aim of providing education for their members and their children). During the Cossack rebellion of Bohdan Khmelnytsky
Bohdan Khmelnytsky
Bohdan Zynoviy Mykhailovych Khmelnytsky was a hetman of the Zaporozhian Cossack Hetmanate of Polish–Lithuanian Commonwealth . He led an uprising against the Commonwealth and its magnates which resulted in the creation of a Cossack state...
(1640), it was captured by Cossacks who carried out a pogrom
Pogrom
A pogrom is a form of violent riot, a mob attack directed against a minority group, and characterized by killings and destruction of their homes and properties, businesses, and religious centres...
against the city's Jewish population; the Poles retook it by assault, killing 24,000 persons and burning 5,000 houses. Eight years later the town was burned by the Russians.

In 1648, on the eve of the Russo-Polish War (1654-1667), Pinsk was occupied by Ukrainian Cossack army under commander Niababy and could only be reconquered with great difficulty by prince Janusz Radziwiłł, a high-ranking commander in the Polish-Lithuanian army. During the war between Moscow and Poland-Lithuania (1654–1667) the city suffered heavily from the attacks of the Muscovite army under Prince Volkolnsky and its allied army of Ukrainian Cossacks.

Charles XII
Charles XII of Sweden
Charles XII also Carl of Sweden, , Latinized to Carolus Rex, Turkish: Demirbaş Şarl, also known as Charles the Habitué was the King of the Swedish Empire from 1697 to 1718...
took it in 1706, and burned the town with its suburbs. In spite of all the wars the city recovered and the town developed with the existence of a printing workshop in Pinsk from 1729-44. Pinsk fell to the Russian Empire
Russian Empire
The Russian Empire was a state that existed from 1721 until the Russian Revolution of 1917. It was the successor to the Tsardom of Russia and the predecessor of the Soviet Union...
in 1793 in the Third Partition of Poland
Partitions of Poland
The Partitions of Poland or Partitions of the Polish–Lithuanian Commonwealth took place in the second half of the 18th century and ended the existence of the Polish–Lithuanian Commonwealth, resulting in the elimination of sovereign Poland for 123 years...
.

In April 1919, at the beginning of the Polish-Soviet War
Polish-Soviet War
The Polish–Soviet War was an armed conflict between Soviet Russia and Soviet Ukraine and the Second Polish Republic and the Ukrainian People's Republic—four states in post–World War I Europe...
, thirty-five Jews from Pinsk were murdered by Polish soldiers, in an incident known as the Pinsk massacre
Pinsk massacre
The Pinsk massacre was the murder of thirty-five Jewish residents of Pinsk taken as hostages by the Polish Army after it captured the city in April 1919, during the opening phases of the Polish-Soviet War. The local Jews were arrested while holding a meeting...
. The Poles suspected them of being Bolshevik
Bolshevik
The Bolsheviks, originally also Bolshevists , derived from bol'shinstvo, "majority") were a faction of the Marxist Russian Social Democratic Labour Party which split apart from the Menshevik faction at the Second Party Congress in 1903....
collaborators. This event created a diplomatic incident that was noted at the Versailles Conference.

Pinsk became part of Poland
Poland
Poland , officially the Republic of Poland , is a country in Central Europe bordered by Germany to the west; the Czech Republic and Slovakia to the south; Ukraine, Belarus and Lithuania to the east; and the Baltic Sea and Kaliningrad Oblast, a Russian exclave, to the north...
in 1920 after the Polish-Soviet War
Polish-Soviet War
The Polish–Soviet War was an armed conflict between Soviet Russia and Soviet Ukraine and the Second Polish Republic and the Ukrainian People's Republic—four states in post–World War I Europe...
and was occupied by the Soviet Union
Soviet Union
The Soviet Union , officially the Union of Soviet Socialist Republics , was a constitutionally socialist state that existed in Eurasia between 1922 and 1991....
in 1939. At this time, the city's population was over 90% Jewish.

From 1941 to 1943, Pinsk was occupied by Nazi Germany. In 1939, the population of Pinsk totaled 30,000, of whom 27,000 were Jews. Most of them were killed in late October 1942, after their deportation by the Nazis from the Pinsk ghetto. Ten thousand were murdered in one day. Pinsk has been part of Belarus
Belarus
Belarus , officially the Republic of Belarus, is a landlocked country in Eastern Europe, bordered clockwise by Russia to the northeast, Ukraine to the south, Poland to the west, and Lithuania and Latvia to the northwest. Its capital is Minsk; other major cities include Brest, Grodno , Gomel ,...
since its independence from the Soviet Union
Soviet Union
The Soviet Union , officially the Union of Soviet Socialist Republics , was a constitutionally socialist state that existed in Eurasia between 1922 and 1991....
in 1991.

Two main sights of the town are lined along the river. These are the Assumption Cathedral of the monastery of the greyfriars
Greyfriars
Greyfriars may refer to:* the Franciscan Order of Friars Minor, in particular the Conventual Franciscans* Greyfriars Kirk, Edinburgh, a church* Greyfriars Bobby, a renowned dog in Edinburgh* Greyfriars Kirkyard, a graveyard in Edinburgh...
(1712–30) with a campanile from 1817 and the Jesuit collegium (1635–48), a large Mannerist complex, whose cathedral was demolished after World War II
World War II
World War II, or the Second World War , was a global conflict lasting from 1939 to 1945, involving most of the world's nations—including all of the great powers—eventually forming two opposing military alliances: the Allies and the Axis...
. The foremost among modern buildings is the black-domed Orthodox cathedral of St. Theodore. 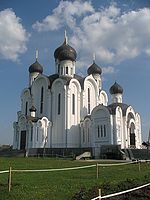